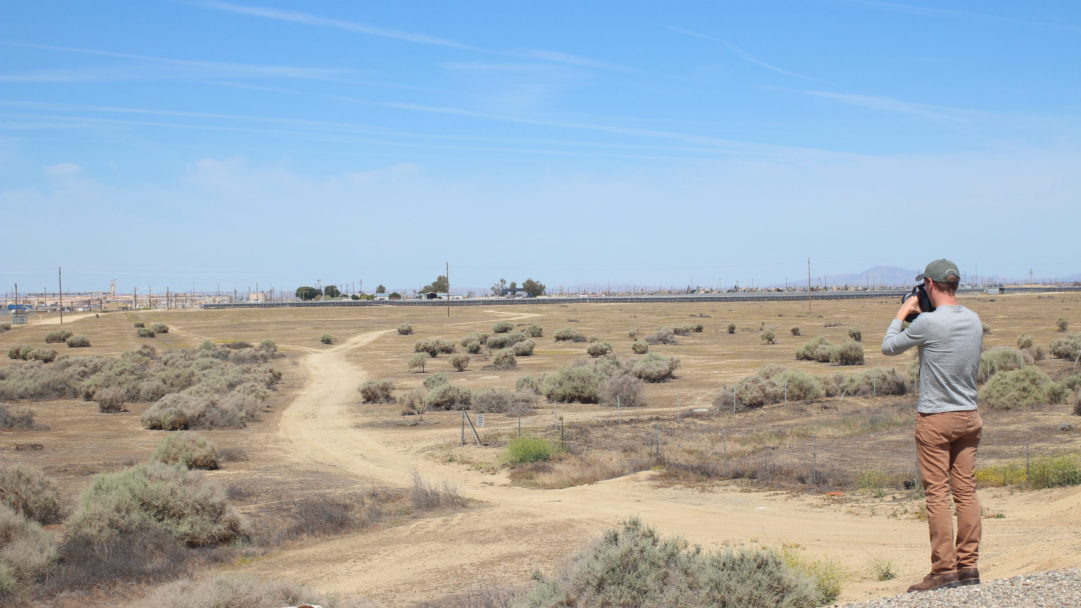 This is the second in a two-part series about oil and gas emissions in the San Joaquin Valley. Read the first story here.

JUST OUTSIDE THE SMALL OIL TOWN of McKittrick, five large steam generators resembling a row of chimneys and operated by Sentinel Peak Resources rise over the chaparral at the edge of California’s Cymric Oil Field. The gas-hungry facilities heat large volumes of water into steam so companies can “sweep” thick, molasses-like crude out of the ground.

This part of San Joaquin Valley — home to oil and gas production, industrial agriculture and massive dairy operations — is an epicenter of planet-warming emissions in a state that is otherwise known for its leadership on climate policy. But many of the worst emissions are invisible without specialized equipment.

New technology is revealing the true extent of pollution across the valley’s major oil and gas fields and underscoring the need for regulatory reform. These revelations are thanks in large part to the work of Riley Duren, a research scientist at the University of Arizona and CEO of the non-profit organization Carbon Mapper who is leading a project that uses aircraft with remote sensing to conduct “wall to wall” surveys to detect emissions missed by cameras or handheld detection. The work is exceptionally important because some oil fields in the San Joaquin Valley rank among the top greenhouse gas-emitting oil fields in the world, due to the energy required to extract their super thick oil reserves, according to the Oil-Climate Index.

Duren’s surveys, which started in California but have since expanded to several other states, looked at landfills and large-scale animal feed operations in addition to oil and gas facilities. They found that less than 0.2% of infrastructure in the state is responsible for between one-third and one-half of California’s total emissions of methane, a greenhouse gas that has almost 90 times the atmospheric warming potential as carbon dioxide over a 20-year period.

The California Air Resources Board (CARB) surveyed nearly 2.3 million regulated oil and gas components in 2019, based on self-reported data from companies. Seven thousand leaks were identified and repaired, per the agency’s November 2021 report. CARB estimates the leaks would have emitted enough methane to equal 76,000 tons of carbon dioxide had they not been repaired.

But CARB’s regulations don’t apply to equipment already covered by local rules, and there are more pieces of infrastructure subject to air district monitoring rather than state oversight. Regulators with the San Joaquin Valley Air Pollution Control District, the local regulating body, are required to visit major polluting facilities, including 37 classified as oil and gas, at least once per calendar year, though the district is considering updating its rules to require quarterly visits.

CARB spokesperson Alberto Larios said his agency has delegated primary authority for enforcing methane regulations to the San Joaquin Valley air district and that the state provides “support and oversight.” When major leaks are detected, CARB can also conduct joint inspections with local regulators and inspectors from the California Geologic Management Division, which regulates oil and gas wells.

The San Joaquin Valley air district has required operators of major polluting facilities to “cash in” emissions reductions credits to show they complied with federal clean air laws by offsetting new pollution. But that system has come under fire after years of mismanagement. In addition, at least some of these facilities have leaked planet-warming pollutants beyond what their permits allow.

Regulations don’t always perfectly account for large volumes of emissions, “so you could argue they should be reduced even if they’re permitted,” said Duren, who is working with a team to launch satellites capable of detecting methane and carbon dioxide emissions on a regular basis.

Near the five Sentinel Peak Resources steam generators, a low roar can be heard from dozens of yards away, but no emissions are visible to the naked eye. Through an infrared camera’s lens, however, the generators look more like a row of smokestacks emitting continuous fumes. Sentinel Peak Resources used offset credits worth 1.6 tons of volatile organic compounds a year and 3.46 tons of nitrogen oxides a year for three of the generators. The company also used credits to offset 4.47 tons of annual nitrogen oxides emissions for the other two generators.

In addition to heating the atmosphere, these two types of emissions contribute to the formation of smog. The credits were cashed in before the air district made significant changes to the emissions reductions credits system, and clean air advocates argue the district should account for how the credits overestimated emissions reductions.

In 2019 the five generators alone released at least 217.4 tons of total organic gasses, including methane, and 143.6 tons of nitrogen oxides. They have also leaked gasses in violation of regulations 46 times since May 2017, according to the air district, which said the company has received 14 notices of violation for leaks.

Christina Dixon, land manager for Sentinel Peak, wrote in an email that there were no violations for the generators at the facility we visited, but she declined to explain why the regulator assessed 14 notices of violation. When regulators visited the facility after receiving questions from Capital & Main and Type Investigations, they said the generators were polluting in compliance with their permits, which the company also noted.

When presented with the camera readings, Dixon said the company could not comment on the findings. “We were not present with the group on the date of filming, have no knowledge of the adequacy of training that any of the video participants have had in the evaluation of emissions, and we do not know if the FLIR [Forward Looking InfraRed] camera operators are properly trained in evaluating the differentiation of heat or other emissions from the FLIR device. However, we can inform you that the San Joaquin Valley Air Pollution Control District routinely inspects Sentinel Peak’s operations.”

Earthworks’ Andrew Klooster and FracTrackers’ Kyle Ferrar, the two camera operators, were trained and certified through the Infrared Training Center, which offers courses for public safety departments, professionals and others.

CARB’s audit in 2019 identified 287 methane leaks that were eventually repaired on Sentinel Peak Resources’ equipment statewide, including several on the steam generators. The company’s footprint in the valley is small compared with Chevron’s, which emitted a combined 1,685 tons of hydrocarbons and other oxygenated compounds and 262 tons of nitrogen oxides in 2019. Another large producer, Aera Energy — a joint venture of Shell and Exxon — emitted at least 216.9 and 388.2 tons, respectively. Chevron reported 730 methane leaks to CARB and Aera reported 1,907; all were fixed, the agency said.

Along with overvalued offsets credits underwriting decades of pollution, the lack of constant monitoring limits public knowledge about the scale of emissions. In the spring, California updated its rules for monitoring toxic air hot spots to capture new points of emissions. During the rule development process, the San Joaquin Valley air district submitted comments to the effect that the new requirements would be burdensome without more funding.

State and air district inspections “are important because they catch persistent emitters, but they often miss highly intermittent emitters,” Duren explained, agreeing that the infrared camera captured emissions properly but noting that it wasn’t clear from the video whether the emissions were persistent problems. California has higher standards on methane than other states, he noted. Still, he said, the current monitoring framework in California is “necessary but not sufficient.” The regulations “don’t catch everything.”

Occasionally the health impacts burst into view, as when inspectors with the California Geologic Energy Management Division confirmed reports in May of long-idled wells leaking methane within a few hundred feet of homes in Bakersfield. While regulators said they’d fixed the initial leaks, follow-up inspections revealed more troubled spots, and Duren said his remote sensing aircraft was even able to detect the pollution before it was addressed — a sign of a far larger leak than would be expected from a few old wells.

But the oil and gas industry’s political power remains entrenched, even in areas close enough to be harmed by its pollution. In the town of Taft, which sits in the middle of the most productive oil field in the state, businesses on downtown streets that feel like the Old West display signs in support of the industry. One banner on a pizza restaurant reads, “SAVE THE WELLS.”

Local officials and businesses participate in industry pride event Oildorado, held every five years, and former President Trump’s embrace of fossil fuels helped endear him to many here. The city’s and county’s tax base is hugely dependent on revenues from the oil and gas industry, but recent economic downturns — which city officials partially blamed on “extreme state regulations on the oil and gas industry” — pushed Taft to declare a fiscal emergency last year.

Yet residents also bear the health burdens of living in a gigantic oil field. Near the town’s main drag, 30-year-old Joanne Almaguer was visiting her parents’ home from Lancaster. She’s taken an interest in public health in part because she grew up here, and many people she’s known have come down with coccidioidomycosis, colloquially known as Valley Fever — a fungal lung infection linked to climate-induced changes in the valley. Locals, including her brother-in-law, are defensive of the industry, she said.

“Out here the jobs are oil-based, but I know they aren’t good for the environment,” she said. “If there weren’t oil jobs, there wouldn’t be any other kinds of jobs, other than schools.”

Another resident down the street, a woman who asked to be identified only as Kelly, said she had moved to Taft 15 years ago from the coast. Her grandson came down with Valley Fever, which she said was manageable, but she saw the need to balance the economic benefits that come from the industry with the need to confront climate change and improve the local air quality.

“They should get our opinions and see what’s good for people who live here long term,” she said. “Like meetings, monthly or whatever, to decide — can we plant more trees to offset something? Are there other programs to do that, maybe?” (The air district recently started broadcasting public meetings about the emissions credits system.)

Even as both California and the EPA consider updating their enforcement rules to further restrict methane and volatile organic compounds, advocates and scientists say the gravity of the climate crisis — to say nothing of the reality of ongoing environmental injustice — demands a quicker and more comprehensive response.

“The problem we have, not just in California,” Duren said, “is that efforts to improve monitoring and rule-making are out of sync with the need to move urgently to solve problems.”

Correction: This story has been updated to clarify Riley Duren’s current position and the availability of commercial imaging spectrometer technology.