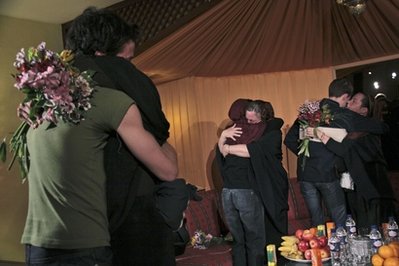 Josh Fattal, Sarah Shourd and Shane Bauer greet their mothers in Tehran in May | Credit: APTOPIX

In a “unilateral humanitarian gesture,” Iran’s President Mahmoud Ahmadinejad has announced that he will grant a pardon to Shane Bauer and Josh Fattal, jailed in Tehran on charges of espionage and illegal border crossing for more than two years.

“I am helping to arrange for their release in a couple of days so they will be able to return home,” Ahmadinejad told The Washington Post.

Bauer and Fattal were arrested in July 2009 along with Bauer’s partner Sarah Shourd while they were hiking along the Iran-Iraq border. They were sentenced in August to eight years in prison. Shourd, who had been suffering health problems, was granted a compassionate release in September 2010. The spying charges were widely regarded as preposterous, andevidence indicates that the trio did not actually cross into Iran until armed soldiers gestured for them to leave their hiking trail and approach.

Asked by the WashPost if the release would definitely happen this week, Ahmadinejad said: “I hope so.”

According to MSNBC, the news first emerged in an interview with NBC’s Ann Curry. The Associated Press spoke with Bauer and Fattal’s attorney, Masoud Shafiei, who said a bail of $500,000 a piece had been set.

This is amazing news for us at The Investigative Fund, where Bauer had been a reporter before his detention.