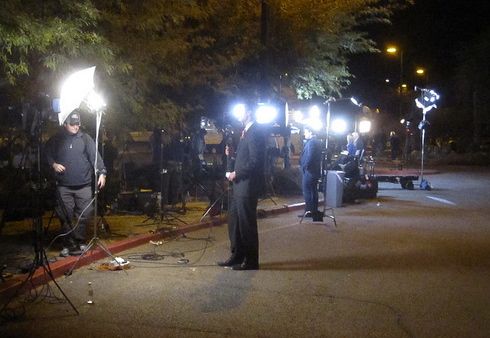 Press swarm a vigil for Rep. Gabrielle Giffords and the other shooting victims, January 9, 2011 at the University of Arizona at Tucson | Credit: DETRITUS

For some time now, it’s been something of a reflexive response by media pundits, particularly conservatives and “moderate” liberals, to point to mental illness when some violent and unstable person commits a horrifying act in the name of extremist right-wing beliefs. If they’re just mentally ill, you can’t blame the people whose ideas they happened to pick up, can you?

Thus we have witnessed a steady stream of “isolated incidents” in which angry, mentally unstable men walk into churches and shoot their liberal targets in the head, or walk into public spaces and open fire, or crash their planes into government offices and gun down police officers. Yet when all these, and a long list of similar incidents, occur, they are dismissed as “isolated incidents.” Because, you see the perpetrators are just “nutcases.”

Likewise, when an oddball college dropout named Jared Loughner walks up to Representative Gabrielle Giffords in a Safeway parking lot and shoots her point-blank, then empties another 30 rounds into the crowd around her, killing six and wounding 14 more — well, that can’t be laid at the feet of his incoherent (but largely right-wing) belief system, can it? After all, he’s obviously got mental problems, right? Therefore, it’s just another isolated incident.

That’s a cop-out, and a dangerous one. One of its chief consequences, in fact, is that the list of “isolated incidents” — and the body count that accompanies it — will just keep mounting. At some point, people will realize that the incidents are perhaps not so isolated after all.

This is particularly the case in a place like Arizona, where the political environment has become increasingly toxic in recent years. Conservative hatred of all things liberal has become so ingrained in the local discourse — thanks in large part to the pervasive popularity of right-wing hate talkers like Michael Savage and Rush Limbaugh, as well as the omnipresence of Fox News and its “opinion” pundits — that it is becoming increasingly difficult to self-identify as a Democrat or a liberal in much of the state. People are afraid — with good reason — that doing so will expose them to vicious verbal and perhaps physical attacks. (Will Bunch wrote about this phenomenon in some detail for Media Matters recently.)

People on the ground in Arizona, like Pima County Sheriff Clarence Dupnik, know this reality intimately — which is why he immediately spoke out after the Giffords shootings, denouncing the “climate of hate” that had come to dominate the political environment in his state, and pointing in particular to right-wing radio and TV pundits who whip up those animosities for ratings, profits, and sheer mean-spirited viciousness.

So the Right’s response is what we have seen in previous “isolated incidents”: Because Loughner is a “nutcase” with views from all over the conspiracy planet, the Right can’t be blamed for his act.

To an extent, they are correct: They certainly can’t be blamed in any direct sense, and especially not in a criminal sense. But neither are they without culpability — especially when the rhetoric upon which the mentally unstable person has acted violently is as deliberately inflammatory and as profoundly irresponsible as what we have seen from the American Right in recent years. The Right, indeed, bears the lion’s share of the blame for creating a toxic environment in which unstable people come to believe that their political opponents are the embodiment of pure evil — that they are destroying America deliberately and maliciously — and therefore must be dealt with violently. This is an environment that today exists not just in Arizona, but everywhere in America.

Put simply (and colloquially): There’s been a lot of crazy talk from the American Right in recent years. And crazy talk — especially condoned at the highest social levels — has a powerful effect on people who are already crazy.

I often refer to a case that happened here in Seattle back in 1986 to help explain the dynamic at work here: On Christmas eve, a mentally ill loner named David Lewis Rice showed up at the Madrona-neighborhood home of Charles and Annie Goldmark and their two boys. Posing as a deliveryman, he forced his way into their home with a toy gun, tied the family up and chloroformed them, and then proceeded over the next several hours to torture and slowly kill them.

Why did Rice do this? It seemed he favored hanging out with a local collection of former John Birch Society members, ardent McCarthyite conspiracists, who called themselves the “Duck Club.” Their regular gatherings at a local watering hole were largely devoted to extemporizing on the evils of local suspected Communists — among them the Goldmark family. Charles Goldmark’s father, a Chelan rancher and state legislator in the 1950s, had been at the center of a landmark early-’60s libel case in which some Spokane-area Red-hunters were successfully sued for falsely smearing Goldmark and his wife as “card-carrying Communists.” In the minds of the Duck Clubbers, there was no doubt they were Communists then — and still were now.

Of course, in reality, not only were the elder Goldmarks innocent of the smear, as they proved in court, but their children were equally if not more so. Nonetheless, when the libel case turned back up in the news in 1986, their names were prominently mentioned in angry discussions at the Duck Club — where David Lewis Rice lapped up every word. Indeed, he decided to take it upon himself to rid the world of the awful Communist menace posed by Charles and Annie Goldmark and their two children, and so he did, on Christmas Eve.

Now, could those murders, which gripped and horrified the city of Seattle, especially as the details emerged, be blamed on the Duck Club? Well, no — at least not criminally speaking. They had broken no laws and had not directly incited Rice to violence. But ethically and morally speaking — that was another matter altogether. The people involved in the Duck Club, some of whom had once been prominent in the Republican Party, were forever tainted, their reputations destroyed. Everyone in Seattle understood that, having filled David Lewis Rice’s head with lies and smears — the kind that dehumanized and demonized the victims — the blood of the Goldmark family was on their hands as well.

When these things happen, common sense tells us that, even if the blood of these victims doesn’t fully coat these hatemongers’ hands, it is at least splattered on them. That is to say, there was a level of moral and ethical culpability involved in the irresponsible speech that inspired David Lewis Rice, as well as in the speech that inspired these other acts. When you fill an unstable person’s head with a pack of crazy ideas that fuel their anger and give them a target for it, and when they then act out violently against that target, social and economic consequences should ensue.

At its core, hate talk of this kind — the kind that lies about people, holds them up for demonization, and creates permission in the minds of the violent to act out — is deeply irresponsible speech, and we know it. It is, like all hate speech, fully protected speech. But asSheriff Dupnik put it this week: “Free speech is free speech, but it’s not without consequences.” For all parties involved.

It’s true that major-media pundits don’t have the immediate personal proximity to the inspiration of a horrendous act that the Duck Clubbers had. Conversely, those small-time fearmongers were merely being irresponsible in their speech on a small scale, before a very limited group of listeners — while major-media pundits have audiences of millions. Thanks to the power of their megaphones, their responsibilities — and their failure to live up to them — are exponentially that much greater.

Thus the problem on a large scale is really one of media ethics. If major-level pundits are spewing irresponsible speech to the masses on a large scale, their responsibility for what ensues is profound indeed.

In the Goldmark case, the Duck Club members not only demonized the Goldmarks, but they told Rice things that were simply not true — though the tellers wished ardently that they were true, they were purely concoctions of their fevered imaginations. This is the case with so much far-right wingnuttery — the “Birther” conspiracy theories, the FEMA-camp claims, the “constitutionalist” theories about taxation and the Federal Reserve, the belief that President Obama is out to take away their guns, to list just a few examples — and yet people believe them anyway. Mainly because major-media figures and leading right-wing politicians have assured them that they are true.

This rhetoric acts as a kind of wedge between the people who absorb it and the real world. A cognitive dissonance arises from believing things that are provably untrue, and people who fanatically cling to beliefs that do not comport with reality find themselves increasingly willing to buy into other similarly unhinged beliefs. For those who are already unhinged, the effects are particularly toxic.

All of these paranoid theories, you’ll observe, serve the explicit purpose of creating scapegoats. A number of them have taken hold in the mainstream public discourse because they have been presented seriously for discussion by various right-wing talking heads, most notably Glenn Beck and Lou Dobbs, with full-throated support from Rush Limbaugh, Bill O’Reilly, Michael Savage, Sean Hannity, Michelle Malkin, and Sarah Palin.

But when we point out their ethical and moral culpability, they inevitably blame it on the “crazy” people. And who, after all, can take responsibility for “crazy” people?

I say: The people who fill their heads with crazy talk can.