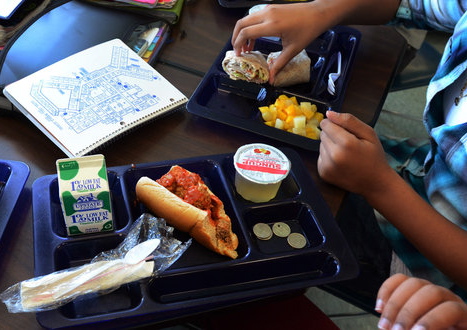 An increasingly cozy alliance between companies that manufacture processed foods and companies that serve the meals is making students — a captive market — fat and sick while pulling in hundreds of millions of dollars in profits. At a time of fiscal austerity, these companies are seducing school administrators with promises to cut costs through privatization. Parents who want healthier meals, meanwhile, are outgunned.

Each day, 32 million children in the United States get lunch at schools that participate in the National School Lunch Program, which uses agricultural surplus to feed children. About 21 million of these students eat free or reduced-price meals, a number that has surged since the recession. The program, which also provides breakfast, costs $13.3 billion a year.

Sadly, it is being mismanaged and exploited. About a quarter of the school nutrition program has been privatized, much of it outsourced to food service management giants like Aramark, based in Philadelphia; Sodexo, based in France; and the Chartwells division of the Compass Group, based in Britain. They work in tandem with food manufacturers like the chicken producers Tyson and Pilgrim’s, all of which profit when good food is turned to bad.

Here’s one way it works. The Agriculture Department pays about $1 billion a year for commodities like fresh apples and sweet potatoes, chickens and turkeys. Schools get the food free; some cook it on site, but more and more pay processors to turn these healthy ingredients into fried chicken nuggets, fruit pastries, pizza and the like. Some $445 million worth of commodities are sent for processing each year, a nearly 50 percent increase since 2006.

The Agriculture Department doesn’t track spending to process the food, but school authorities do. The Michigan Department of Education, for example, gets free raw chicken worth $11.40 a case and sends it for processing into nuggets at $33.45 a case. The schools in San Bernardino, Calif., spend $14.75 to make French fries out of $5.95 worth of potatoes.

The money is ill spent. The Center for Science in the Public Interest has warned that sending food to be processed often means lower nutritional value and noted that “many schools continue to exceed the standards for fat, saturated fat and sodium.” A 2008 study by the Robert Wood Johnson Foundation found that by the time many healthier commodities reach students, “they have about the same nutritional value as junk foods.”

Monica Zimmer, a Sodexo spokeswoman, said that “much has changed” since those studies, pointing to the company’s support for “nutrition education to encourage young students to eat more fruits and vegetables.”

Roland Zullo, a researcher at the University of Michigan, found in 2008 that Michigan schools that hired private food-service management firms spent less on labor and food but more on fees and supplies, yielding “no substantive economic savings.” Alarmingly, he even found that privatization was associated with lower test scores, hypothesizing that the high-fat and high-sugar foods served by the companies might be the cause. In a later study, in 2010, Dr. Zullo found that Chartwells was able to trim costs by cutting benefits for workers in Ann Arbor schools, but that the schools didn’t end up realizing any savings.

In addition, the management companies have a cozy relationship with food processers, which routinely pay the companies rebates (typically around 14 percent) in return for contracts. The rebates have generally been kept secret from schools, which are charged the full price.

Last year, Andrew M. Cuomo, then the New York State attorney general, won a $20 million settlement over Sodexo’s pocketing of such rebates. Other states are following New York and looking into the rebates; the Agriculture Department began its own inquiry in August.

With the crackdown on these rebates, food service companies have turned to another accounting trick. I found evidence that the rebate abuses are continuing, now under the name of “prompt payment discounts,” under an Agriculture Department loophole. These discounts, for payments that are often not prompt at all, are really rebates under another name. New York State requires rebates to be returned to schools, but the Sodexo settlement shows how unevenly the ban has been enforced.

The food service companies I spoke with denied any impropriety. “Our culinary philosophy, as a company, is to promote scratch cooking where possible and encourage variety and nutritionally balanced meals,” said Ayde Lyons, a Chartwells spokeswoman. “We use minimally processed foods whenever possible.”

There are economic and nutritional consequences to privatization. School kitchen workers are generally unionized, with benefits; they are also typically local residents who have children in public schools and care about their well-being. Laid-off school workers become an economic drain instead of a positive force. And the rebate deals with national food manufacturers cut out local farmers and small producers like bakers, who could offer fresh, healthy food and help the local economy.

Children pay the price. Dr. Zullo found that privately managed school cafeterias offered meals that were higher in sugar and fats and made unhealthy snack items — soda, cookies, potato chips — more readily available. The companies were also less likely to use reduced-sugar recipes. Linda Hugle, a retired school principal in Three Rivers, Ore., told me that when her district switched to Sodexo, “the savings were paltry.” She added, “You pay a little less and your kids get strawberry milk, frozen French fries and artificial shortening.”

Advocates who fight for better food face an uphill battle. Dorothy Brayley, executive director of Kids First, a nutrition advocacy group in Pawtucket, R.I., told me she encountered resistance in trying to persuade Sodexo to buy from local farmers. (Sodexo says it does buy some local produce and has opened salad bars in many schools.) Donna D. Walsh, a former school board president in Westchester County, N.Y., told me she worked with a supportive superintendent to get Aramark to stop deep-frying food and to open a salad bar. But after a new superintendent came in, she said, the company went back to profit-driven menus of pizza and bagels.

Not surprisingly, the most committed foes of the rules are the same corporations that make money supplying bad food. Aramark, Sodexo and Chartwells, as well as food processing companies like ConAgra, wrote letters arguing, among other things, that children may not want to eat healthier food.

Any increase in fruit and vegetables might result in “plate waste,” wrote Sodexo. A protein requirement at breakfast, Aramark said, would hamper efforts to offer “popular breakfast items.” Their lobbying persuaded members of Congress to block a once-a-week limit on starchy vegetables and to continue to allow a few tablespoons of tomato sauce on pizza to count as a vegetable serving. Thanks to that cave-in, children will continue to get their vegetables in the form of potatoes for breakfast and pizza for lunch.

One-third of children from the ages of 6 to 19 are overweight or obese. These children could see their life expectancies shortened because of their vulnerability to diabetes, heart disease and cancer. Unfortunately, profit, not health, is the priority of the food service management companies, food processors and even elected officials. Until more parents demand reform of the school lunch system, children will continue to suffer.