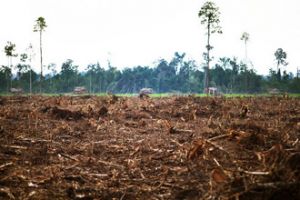 Back in December, I wrote an article for Mother Jones about Indonesia’s efforts to reduce its levels of deforestation and, by extension, its greenhouse gas emissions, which are the third highest in the world, trailing only the U.S. and China. This endeavor is part of a U.N. scheme called REDD — Reducing Emissions from Deforestation and Degradation — that aims to funnel billions of dollars of rich country aid to developing ones, like Indonesia, Guyana, and Brazil, that cut down millions of acres of trees a year due to logging, oil palm and acacia plantations, and biofuels production. In exchange for aid, these countries ween their economies away from forest resource extraction.

By way of the small town of Sungai Tohor, which is located in Sumatra, I showed how Indonesia is at crossroads. On one hand, it is set to receive billions of dollars from Norway and the U.S., among other countries, in exchange for imposing a moratorium on the issuance of logging permits and setting up a system for monitoring, verifying, and reporting activities in its forestry sector. On the other hand, Indonesia’s government has been inextricably linked for decades to the logging industry and in more recent times palm oil and pulp/paper producers. Corruption is rampant. So, too, is illegal logging (although on the decline). How, I asked, could Indonesia turn all this around and go from being an enabler of forest destruction to a steward of the forests.

Since December, Indonesia has clearly not turned the corner on deforestation. Implementation of its REDD program has lagged, corruption continues to cast a dark shadow over the forestry sector, and communities like Sungai Tohor remain threatened by expanding mono-crop plantations of oil palm and acacia trees, which are used to make paper. In other words, little has changed beyond the government’s public support for reigning in the logging sector and there’s scant evidence that this will change anytime soon.

In exchange for a billion dollars in Norwegian aid, Indonesia was meant to impose a two-year moratorium on the issuance of new logging permits. The moratorium was set to take effect at the beginning of 2011. Yet, nearly five months later there is no moratorium in place and various government agencies are split on how to interpret what types of forests should be protected.

The central hang-up within the Indonesian government is whether or not industrial-scale plantations should be allowed on lands that have been partially degraded. The Indonesia government wants to boost oil palm and acacia production in order to increase GDP while at the same time reducing deforestation of natural rainforests and carbon-rich peat soils. Allowing industrial plantations on degraded land is an important concession to the oil palm and pulp/paper companies who fear a strong moratorium will cut into their profits. But conservation groups point out that even degraded lands provide important habitats and store vast amounts of carbon when developed and should be vigorously preserved.

Meanwhile, Mongabay.com reports that Wandojo Siswanto, a former member of Indonesia’s climate change negotiating team and an advisor at the Ministry of Forests, was found guilty of receiving a $10,000 bribe from a telecommunications company seeking a contract with the ministry. He will serve three years in prison. Corruption within the forestry sector has been rampant. An Ernst and Young audit found that during the 1990s over $5 billion from a national reforestation fund could not be accounted for by the Ministry of Forestry.

A new report by Greenpeace highlights an emerging area of dysfunction within Indonesia’s REDD program. The group documents how the recommendations of international consultancy firm McKinsey Group could lead to Indonesia implementing a REDD program that does little, if anything, to reduce amounts of deforestation. According to Greenpeace, McKinsey is promoting methods that understate the financial impacts of cutting GHG emissions due to smallholder agriculture (like Sungai Tohor’s), while setting extremely high financial costs for clamping down on industrial forestry and agri-business. The firm’s cost curve assumptions bias plantations over smallholder activities, which contradicts the stated goals of the U.N. program — reducing carbon emissions, while also protecting forest communities and biodiversity — that were codified at the U.N.’s latest meeting in Cancun, Mexico this past December.

As if McKinsey’s relationship with Indonesia isn’t enough of a cause for concern, the firm has a near monopoly on providing advise to other REDD-fund eligible countries, like Papua New Guinea, the Democratic Republic of Congo, and Guyana. Greenpeace details McKinsey’s work with these countries as well and shows that, like in Indonesia, it is promoting policies that cut against the aims of U.N. REDD.

This is the clearest evidence yet that the U.N. REDD is skewed by corporate influence and is doing little to change business as usual in the forestry sector and mitigate global GHG emissions. There are billions of dollars at stake in Indonesia’s U.N. REDD program alone. McKinsey is virtually writing the playbook for how the program will be implemented there — and beyond.

And what of Sungai Tohor? Lafcadio Cortesi of the Rainforest Action Network told me after returning from a recent trip to the area that the logging has stopped for now as the community continues to advocate for a government-imposed halt to logging.

But chainsaws rarely sit idle for long in Indonesia.

Robert S. Eshelman is a senior editor at Seeker.com.