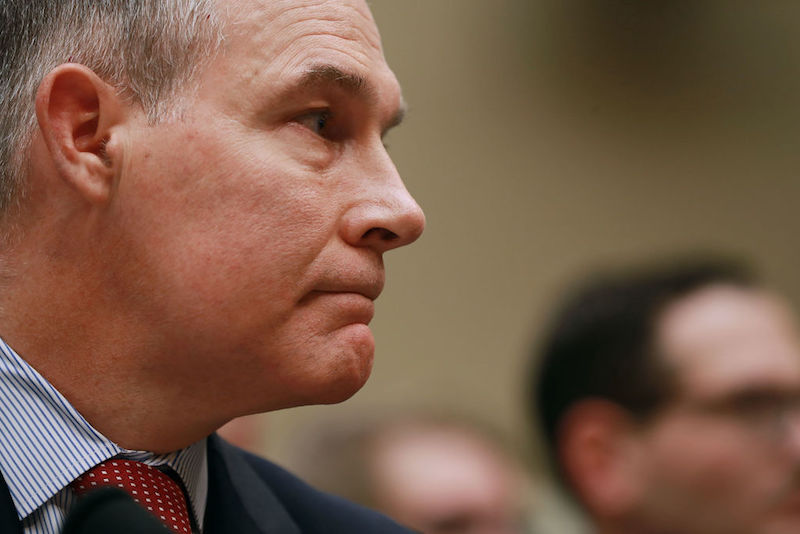 Federal action on chemicals seems to be slowing, even as the number we encounter daily grows. With the Trump administration seemingly getting the federal government out of the business of cleaning up the environment, states will have to show the way. Before President Trump was elected, Massachusetts, California and Maine led the charge, regulating certain toxic substances that the federal government had let slip by. Now Washington State has moved to the fore in this fight.

When Stephen Swanson, a retired E.R. doctor, learned that his drinking water contained the industrial pollutant PFOA and several related chemicals, he was alarmed. Dr. Swanson, who lives on Whidbey Island, Wash., began to search for information about the chemicals, trying to figure out how they had gotten into his well and whether the contaminants that he and his family had been drinking for years might have affected their health.

What he found was worrisome. PFOA, best known for its use in the making of Teflon and other nonstick products, had seeped into his well water from a nearby Naval air station that had used firefighting foam that contained the chemicals. PFOA, he learned, stays in human bodies for years and endures in the environment for millenniums. Even at very low levels, exposure to the chemical had been linked to certain cancers, thyroid disease, pre-eclampsia and other health problems. There is also a substantial literature showing that PFOS, a closely related chemical also used in firefighting foam, could lead to a similar constellation of effects.

Dr. Swanson’s experience is not uncommon. According to research from the Environmental Working Group and Northeastern University, at least 15 million Americans in 27 states have PFOA or PFOS in their tap water.

Long before the advent of Mr. Trump, the federal response to this contamination crisis had been slow. Though the first reports of PFOA in drinking water are now two decades old, the Environmental Protection Agency and its administrator, Scott Pruitt, have yet to set enforceable limits on it. In 2006, DuPont and seven other companies that manufactured or used PFOA agreed to phase it out by 2015, along with other long-chain perfluorinated compounds. The agency did set drinking water health advisory limits for PFOA and PFOS in 2016, but those can’t be used to enforce cleanups — nor do the limits prevent further use of products containing any of the chemicals in their class.

Unlike the federal government, Washington State came up with an ingenious solution. Late last month, it passed the first state laws banning firefighting foam and food packaging containing not just PFOA and PFOS, but the entire class of chemicals to which they belong. Though chemical manufacturers have argued that some compounds in the class are safer than others, Washington banned them all. This class — known as PFAS — is huge. The E.P.A. has received information from manufacturers about hundreds of unique PFAS chemicals. Around the world, thousands are in commercial use. Like PFOS and PFOA, they may affect immune and liver function as well as hormone levels. But, as Dr. Swanson discovered, almost nothing is known for sure about their health effects.

The scarcity of research on the lesser-known PFAS chemicals helps explain why the E.P.A. issued drinking water health advisories for only the two best-known chemicals, PFOA and PFOS. Washington State lawmakers might also have held off on taking action until they had definitive studies on each compound. Instead they took a leap. Forgoing the years or perhaps decades of research necessary for the chemicals to be fully understood, they figured it was safest to assume the worst: that since the chemicals all belong to the same class and have similar structures, they are likely to affect people in similar ways.

It’s a reasonable conclusion that others have reached the hard way. A factory in Parkersburg, W.Va., first brought the dangers of PFOA to the world’s attention in 2005, when the initial stage of a class-action suit over the chemical was settled. The plant, then owned by DuPont, had let PFOA seep into the drinking water of 70,000 people in the area. Studies of the exposed population linked the chemical to six diseases, including kidney and testicular cancer.

The class-action lawsuit and thousands of personal injury claims that followed were, in many ways, a triumph for the plaintiffs. In total, DuPont and its spinoff company Chemours wound up paying more than $1 billion as a result of the litigation. Yet in the more than two years I have been writing about these chemicals, the crisis that at first seemed limited to those two specific compounds has turned into a much larger and messier conundrum. That’s because, while they were phasing out PFOS and PFOA, many of the companies were also phasing in replacement chemicals that recent research in lab animals has shown pose some of the very same problems. It’s unclear what these chemicals will do to people, which is precisely the problem.

When DuPont introduced GenX, in 2009, the company promoted it as a sustainable alternative to PFOA. The new chemical, which is based on a chain of six rather than eight carbons, does exit the human body more quickly than PFOA. But like PFOA, GenX is a “forever chemical,” expected to persist on the planet long after humans are gone. According to studies DuPont submitted to the E.P.A., GenX had many of the same effects on lab animals that PFOA did, including changes in the size and weight of animals’ livers and kidneys, alterations to their immune responses and cholesterol levels, weight gain, reproductive problems and cancer.

I found those studies about GenX in an E.P.A. database almost two years ago. Since then, GenX has been detected in the drinking water of more than 200,000 people in North Carolina. Their water comes from the Cape Fear River, where another factory first owned by DuPont and later Chemours emitted its chemical waste for years. GenX has also recently been found in the groundwater near the same West Virginia plant that caused the PFOA contamination. Testing is underway to see whether it is also in drinking water there.

While researchers are now turning their attention to the health effects of GenX, it will take years to amass enough information to fully understand it. Even if scientists were to quickly catalog its effects, GenX is only one chemical. Recent water testing near the same Chemours plant in North Carolina found that GenX made up a small portion of the PFAS chemicals. Other related compounds have yet to be named, let alone studied or regulated.

Up to this point, we have treated these mystery chemicals with a bizarre optimism: that despite the similarities, somehow they won’t cause the same problems that their close relatives do. Combined with our longstanding federal policy of requiring definitive proof of environmental dangers before taking action, this way of thinking has led to lots of regrettable substitutions. One is underway now as the Department of Defense is phasing out firefighting foams containing PFOS and PFOA, which have caused contamination near military bases and airports, and phasing in foam that contains other PFAS chemicals.

Firefighting foam that doesn’t contain any of the PFAS chemicals, which a growing number of entities around the world are beginning to adopt, is part of the solution. The approach Washington State is taking — banning the entire class of compounds, instead of just one — presents another. Washington’s new laws won’t make it any easier to clean up the extensive mess we’ve already made. Nor can they undo the exposure people have already had or address the health problems that has caused. But by tackling the whole class of dangerous compounds together, the state has shown a way out of the endless contamination cycle for the rest of us, who keep hoping for the best and getting the worst.

This article was reported in partnership with the nonprofit Investigative Fund, now known as Type Investigations.