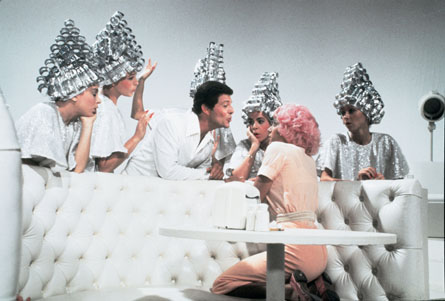 Beauty School Dropout, a still from the film Grease

“I met my first Mary Kay ladies at a beauty school wedged between a liquor store and an off-track betting parlor on the backside of a strip mall near Poughkeepsie, New York.” That’s how I began my Harper’s article on the cleverly disguised pyramid scheme that is the multi-level marketing of cosmetics giant Mary Kay. But while I was there during an official skin care class hosted by two such ladies with special permission from the school, I hadn’t just wandered in off the street.

I’d been enrolled in beauty school as a night student for two months. And for a total of ten months between 2009 and 2010, I spent every weeknight learning to give facials, blend eye shadow, and wax bikini lines.

My fellow students were a mix of single moms working in low-wage service industry jobs or dead-end office management positions and recent high school graduates without plans or financial means for a four-year college; they would all tell you they were attending Beauty U because makeup, hair, or skincare was their passion and they wanted a career they loved in the world of beauty.

But I wasn’t a career changer or underemployed. (Unlike the vast majority of my classmates at Beauty U, I have a college degree and a bill-paying career as a writer.) I was there because I was a beauty consumer who had grown increasingly uncomfortable with the disconnect between the amount of money we spend on beauty products and services — more than $200 billion per year — and the amount women can expect to earn when they sell beauty products to support themselves and their families. For example, the average beauty school-trained salon worker earns just $9 to $15 per hour after shelling out up to $15,000 for her certification — often not much more than she earned before as a daycare worker, bartender, or home health aide. And it’s a rate that can vary wildly depending on her ability to score a tip or “upsell” a client to a higher-priced product or service, just as a Mary Kay consultants’ earnings depend on whether party-goers are in the mood to buy one tube of hand cream or a whole gift basket’s worth.

And low wages (not to mention the lack of healthcare, paid vacation, family leave, or retirement plans also endemic in these pink-collar jobs) are just the beginning of the story. There are also human costs — like what happens when these products aren’t subjected to pre-market safety testing. Think known carcinogens like formaldehyde, which remains in Brazilian Blowout and other salon products two years after the government received the first reports of hair stylists getting sick.

On my first night in beauty school, we went around the room and talked about why we wanted to work in the beauty industry, and I was surprised to learn that almost everyone said they already were, by selling Mary Kay, Avon, Arbonne, or another direct sales cosmetics brand. Students brought in their catalogs and invited each other to parties — but, as I learned when I talked to my classmate Kim Montero and interviewed more women for the Harper’sstory, nobody was making real money at their cosmetics businesses. At best, it offered a way to get products they enjoyed at a discount. At worst, they racked up serious debt.

Of the 600,000 Mary Kay consultants in the United States, fewer than 300 are earning a six-figure income after business expenses, estimates Tracy Coenen, a financial-fraud investigator and founder of the online community Pink Truth. “Most of those who do profit are making minimum wage,” she says. This is because it costs so much to stay in business with the company.

Girls learn at a shockingly early age that how they look matters more than who they are or how smart they might be (anyone who needs convincing on that front need only click for Peggy Orenstein’s teeth-grinding catalog of science kits for girls which teach you how to make your own perfume and spa products, versus those for boys that teach chemistry and physics. And the beauty school I attended and thousands others like it across the country recruit heavily at pop music festivals, high schools, and shopping malls with brochures touting the benefits of a “glamorous, recession-proof beauty career!” Meanwhile, Mary Kay and other direct sales cosmetics brands make similar promises about “full-time income for part-time work,” while selling the idea that making women feel beautiful will improve their lives. But when girls grow up, they find that the beauty-based jobs they signed up for can barely sustain a living wage, let alone the kind of glamorous lifestyle that fantasies (and Mary Kay sales pitches) are made of. The women I graduated beauty school with could give fantastic facials and paint on a perfect smoky eye, but at last count only two have found consistent employment in salons. Because as it turns out, beauty isn’t actually worth all that much in the labor market.