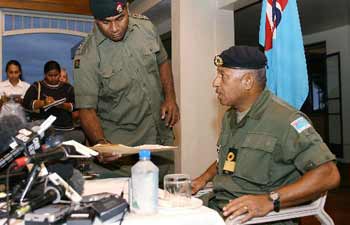 Fiji Water announced today that it will re-open its factory at 8 a.m. Wednesday, less than 48 hours after brusquely dismissing its Fijian workforce and shuttling its employees off its premises via express buses. The company announced that it has agreed to pay Fiji’s new water extraction tax of 8 cents [US] per liter, which just Monday the company had argued would force it to shut down.

On Monday, Fijian press reported that Fiji Water had ordered its entire 400-person workforce dismissed immediately, even though the tax wouldn’t take effect until next year. “Workers stood in shocked silence,” and “many openly wept” as general manager Paul Davies informed them of the company’s decision to send them home, the Fiji Times said. (The company also announced a halt to its various charity projects in Fiji.) Fiji press also reported that Fiji Water’s private security firm, Homelink, had secured the Fiji Water facility after the workers went home. Radio New Zealand reported that the union representing the fired workers wrote to the Prime Minister, asking him to reconsider the tax.

During a similar, yet less pitched, fight over a tax hike proposal in 2008, Fiji Water likewise shut down temporarily and sent its employees home. Back then the government backed down. This time, officials have made it clear that that wouldn’t happen: Before the company changed its mind about the tax, Prime Minister Voreqe (Frank) Bainimarama said that Fiji Water should sign off on its land leases as soon as possible so that the government can proceed with finding a new company to manage the water. “The Fiji Government remains firmly committed to both international and local investment in Fiji,” Bainimarama added.

While the government will still have to rely on Fiji Water’s own measurements of the volume of water it extracts, the method will be less complicated than figuring out a percentage of the company’s actual international income. As I’ve reported, Fiji Water has for years operated through a network of international tax havens such as Luxembourg, the Cayman Islands, and Switzerland. During a 2008 fight over a water-extraction tax in Fiji, the company submitted diagrams to Fiji courts including complex organizational charts of the company’s global corporate structure via a network of global companies-its Swiss operations have names like “Daisy” and “Jasmine”.

Fiji Water still has not returned calls for comment.

This post first appeared on motherjones.com. Anna Lenzer’s reporting was supported by the Investigative Fund at The Nation Institute.