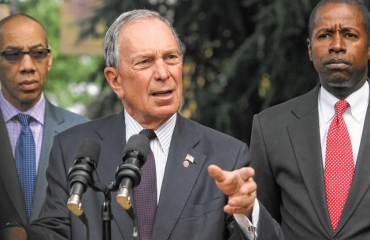 Many critics of the New York Police Department’s mass stop-and-question or frisk policy focus not on the race of the people stopped but on the sheer volume of encounters. They say this reflects a larger problem for the NYPD: an obsession with metrics. The incredible decrease in crime during the 1990s attached enormous political weight to the city’s statistics on major felony offenses. Inside the department, observers say, this translated into a fixation with numbers

There’s no denying that math matters when it comes to crime and policing. As City Limits’ Jeanmarie Evelly and I reported back in June for The Investigative Fund, the 29 murders in the city’s 75th precinct — Brooklyn’s East New York neighborhood — in 2011 were the most for any precinct in the city. And the thousands of police encounters last year within a seven-by-nine block area of that precinct reflected an extraordinarily intrusive police presence.

But sometimes numbers don’t mean all they seem. Today’s story by the New York Post — that says that the number of police stops fell 34 percent in the second quarter of 2012 — is certainly interesting. But quarter-to-quarter changes in the number of NYPD stops are not uncommon: In 2011, the number dropped 15 percent between the second and third quarters, then jumped 12 percent over the last three months of the year. Even bigger shifts occurred earlier under Mayor Bloomberg: From 2006 to 2007, the annual number of stops (see page 3)dropped by 33,000, before beginning a steady rise — at least until now.

But questions of significance aside, the sharp drop in stops will become fodder for those who’ve claimed that crime is spiking in the city because political pressure in May and June forced the NYPD to back down on its street stops.

Amid that surge of shootings in July, the mayor told an audience in Queens: “If the NYCLU is allowed to determine policing strategies in our city, many more children will grow up fatherless and many more children will not grow up at all.” Later that month, after a four-year-old boy was killed in a playground shootout in the Morrisania section of the Bronx, the local State Senator, Ruben Diaz. Sr., suggested that stop-and-frisk might have averted the gunplay and declared, “I know it’s not too politically correct, but I am saying that I am fully, fully, totally supporting stop-and-frisk.” And columnist Mike Lupica, who has already endorsed NYPD commissioner Ray Kelly for mayor next year, wrote in the Daily News, “So the news of the weekend is about guns Bloomberg and Kelly couldn’t scare off the streets, though they have scared off plenty with a stop-and-frisk program that you are supposed to believe is more of a danger to the city than illegal guns.”

Well, given the steep drop in stops, what is happening to crime? So far in 2012, murders and car thefts are down in the city compared to the same period last year. Rape (4.7 percent), robbery (5.9 percent) and grand larceny (9.8 percent) are up considerably, while felonious assault and burglary have climbed 2 percent or less.

Is the decrease in stop-and-frisk an explanation for the increases?

Maybe. Or maybe not.

Crime was reported to be up early in the year, when the number of stops had actually increased. After the first quarter, New York was on pace to stop 800,000 people this year. It’s important to remember that the second quarter decrease is coming off a record high in January-March.

Beyond that, recent experience establishes little pattern for how stops and crime interact.

According to the FBI, from 2010 to 2011 the number of violent crimes in New York City increased 6 percent. Was this because the NYPD had decreased its number of stops? Nope. The number of NYPD encounters soared 14 percent last year.

On the other hand, from 2006 to 2007, as the number of NYPD stops dropped 7 percent, the number of violent crimes fell as well (by just over 3 percent).

Obviously, this doesn’t suggest NYPD stops cause crime. Sometimes stops rise in reaction to a crime jump. Sometimes they’re not connected at all. In our analysis of stops in the 75th precinct last year, we found that the most common crimes associated with arrests made after stop-and-frisks were possession of marijuana and criminal trespass. Neither offense has much to do with the violence that’s making headlines.