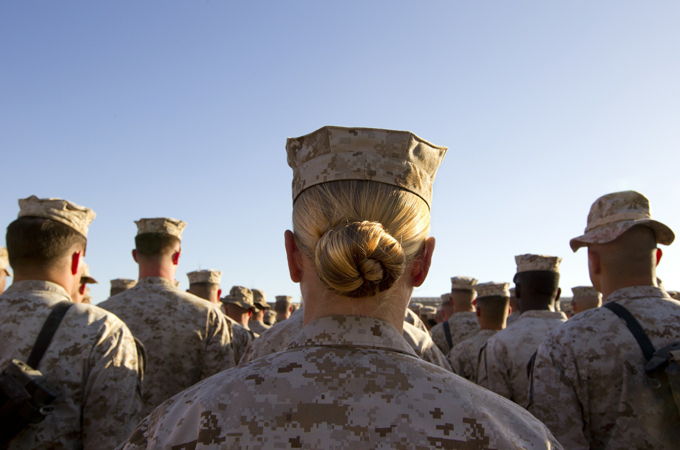 Sexual abuse happens in the US military at rates twice the national average, according to reports. | Credit: GALLO/GETTY

Every year, rape increases at an alarming rate within American military institutions — and even males are victims of the cycle.

In fact, due to raw demographics, one can roughly surmise that most victims of sexual abuse in the military are male.

Many of the victims suffer from Military Sexual Trauma (MST) and are shamed into silence, with numerous cases not even reported.

A disturbing trend, however, is how military officials seem to be sweeping this damaging issue under the rug and deflecting blame.

Susan Avila-Smith, the founder of the veteran’s advocacy group VET-WOW in Seattle, Washington, told Al Jazeera that not enough is being done to hold the military accountable for assault.

Kira Mountjoy-Pepka of Pack Parachute, a non-profit organisation which assists sexually abused veterans, explains that the military system favours the perpetrator. “What we’re seeing now, and what we’ve seen for decades, is when someone is assaulted, the military investigators create false or misleading crime reports. Then the case is dismissed, and the command persecutes the victim for false reporting.”

She cites the Feres Doctrine (Feres v. United States, 340 US 135 [1950]) that made it impossible for the survivor to sue the investigators since it, “essentially prohibits people from suing the military and/or petitioning any non-military legal authority for interdiction without the military’s prior and explicit agreement and consent.”

“If you’re a victim and you report this crime and the military mishandles the investigation, you can’t sue them,” she explains, “I feel if this were taken up by Congress as an issue it would be exposed that the military is operating against the Constitution by denying victims their first amendment rights. The military always has their own investigators investigate [these cases], and that doesn’t seem like justice to me.”

The military goes to great lengths to protect the perpetrators, and that deters survivors from reporting. The incidences of sexual trauma in the military are staggering.

The Department of Defence claims to have a zero-tolerance policy towards sexual assault in the ranks, but figures indicate otherwise.

According to the US Department of Veterans Affairs, the rate of sexual assault on women in the military is twice that in the civilian population. A Government Accountability Office report concluded that most victims stay silent because of “the belief that nothing would be done; fear of ostracism, harassment, or ridicule and concern that peers would gossip.”

While a civilian rape victim is ensured confidential advice from his or her doctors, lawyers and advocates, the only access a military rape survivor has is to a chaplain.

Compared with a 40 per cent arrest rate for sex crimes among civilians, only eight per cent of investigated cases in the military lead to prosecution.

After Congress mandated it do so in 2006, the Pentagon started a comprehensive programme to track incidents. That year, there were 2,974 reported cases of rape and sexual assault in the military. Of these, only 292 cases resulted in trials, and those netted only 181 prosecutions of perpetrators.

Nearly half the cases are dismissed for lack of adequate proof or due to the death of the victim. Less than 11 per cent of the cases result in a court martial. Often, those prosecuted merely suffer a reduction in rank or pay, and 80 per cent receive an honourable discharge nonetheless.

The victim, on the other hand, risks ending his or her career when they file charges.

Faced with the threat of possible persecution and losing their jobs and professional credibility, most soldiers prefer to remain silent about their traumas. Not that silence helps, because records reveal that less than one-third of the women have been able to maintain their careers in the military after having been assaulted.

When presented with these dismal statistics in an interview with ABC News last year, former Principal Undersecretary of Defence for Personnel and Readiness, Michael Dominguez said, “Yes, we absolutely have to get better. Secretary [Robert] Gates himself is driving this initiative this year to improve our ability to investigate, to prosecute and convict. This is not where we want to be.”

Dominguez’s replacement, Clifford Stanley, issued a Strategic Plan for Fiscal Years 2010-12 on December 30, 2009. It addresses the need to “Establish a culture free of sexual assault”, and puts forth goals of 90 per cent “awareness” and 80 per cent “confidence” in the sexual assault prevention and response program by the end of 2015, with no specific mention of the means to accomplish these goals.

Those plans do not fill Susan Avila Smith with confidence. She is director of the advocacy group Women Organising for Women and she projects a dismal picture.

“The people I work with go all the way back to WWII. The stories are almost exactly the same. It has always been covered up. Still the drill sergeants, chaplains, and doctors appear to be the worst perpetrators. So when these guys are convicted, rather than punishing to the fullest extent, they can give them a letter of reprimand which means Tommy was bad, signed The Commander. That letter comes out of his personnel file before he moves on to the next unit, so it’s like nothing happened.”

Military ‘aware’ of the crisis

Pentagon spokesperson Cynthia Smith assured Al Jazeera, “We understand this is very important for everyone to get involved in preventing sexual assault, and are calling on everyone to get involved, step in, and watch each others’ backs. We understand that one sexual assault is too many in the Department of Defence (DOD). We have an office working on prevention and response”

The office she alludes to is the Sexual Assault Prevention and Response Office (SAPRO), which is responsible for the oversight of the DOD’s sexual assault policy.

In 2008 Kaye Whitley, Director of SAPRO, was subpoenaed to testify at a hearing of the Subcommittee on National Security and Foreign Affairs but was ordered by the military not to do so.

At a second oversight hearing she did appear and confessed to the members of Congress, “I was given a direct order by my supervisor to get back in the van and go back,” she said.

At an MST Congressional hearing on February 3, 2010, highlighted was what many see as the problem — the military investigating itself for criminal acts of sexual assault and rape committed by its personnel, as well as the naming of Task Force members and the work of the Task Force being delayed for three years.

Due largely to Mountjoy-Pepka’s work in the wake of her experiencing MST and taking action, in October 2005 then-Secretary of Defence Donald Rumsfeld authorised the DOD Task Force on Sexual Assault in the military.

However, the DOD took three years to name the Task Force, and the group’s initial meeting did not occur until August 2008. During that period, 6,000 service women and men were sexually assaulted or raped.

Task Force leaders also told Congress that “neither victims nor other military personnel were routinely informed of the results of disciplinary actions relating to sexual assault,” and “Commanders generally did not communicate case results to members of their command, and that this lack of information often led to misperceptions, rumours, and assumptions that allegations were unfounded.”

Anuradha Bhagwati, the executive director of Service Women’s Action Network (SWAN), a group that helps military women who have been victims of sexual violence, contradicts claims by the DOD that their new programs will slow the number of MST victims. “We are seeing a disturbingly steady flow,” Bhagwati said .

In addition, she told Al Jazeera, “Contrary to DOD claims that they are making it easier for MST survivors to get help, MST survivors have a much more difficult time than other vets because of the burden of proof being on them. There are concrete legal barriers in place that prevent MST survivors from getting help.”

The DOD defends the policy, saying it ensures that soldiers get retained, promoted and their careers aren’t destroyed.

SWAN has draft legislation in place to get rid of this policy.

Bhagwati concludes that nothing short of “radical systemic change” will solve the MST crisis in the military today.

Susan Burke is an experienced litigator in Washington, DC who served as lead counsel in five actions brought on behalf of the torture victims at Abu Ghraib prison, as well as a suit against Blackwater for killing 17 Iraqis in Baghdad.

She urges us to think of MST this way: “Think of the victims — it is a double blow — first they’re physically assaulted, then the institution that is supposed to care for them does not care for them.”

She claims that the DOD has done little more than give lip-service to tackle the problem. “They created different positions, SARC, SAPRO, but the problem is that there is no genuine political will to change things. It’s a paper tiger…the will doesn’t exist. When you look at the career paths of perpetrators compared to the victims, the former are rising up the ranks, and the victims are leaving the military.”

She is putting together a class action suit against the DOD for failure to protect service-members from MST, aims to file it in February, and hopes the case will bring significant and lasting reform in the DOD’s stance on MST.

They’ve been saying for years that they just need more time, that they’re getting their act together,” Burke adds, “You can’t expect to have a properly functioning military without discipline problems being addressed, and if you can’t address rape, you have a real problem.”

This is the second part of an Al Jazeera investigation into sexual abuse in the US military. Readpart one here.

Research support for this article was provided by the Investigative Fund of The Nation Institute.

1995: Archives of Family Medicine revealed that 90 per cent of women veterans from the 1991 US attack on Iraq and from earlier wars had been sexually harassed.

2003: American Journal of Industrial Medicine surveyed women veterans from Vietnam to the 1991 Iraq attack and found that 30 percent of them had been raped.

2004: According to a study published by the Journal of Military Medicine, of veterans from Vietnam and all wars since, 71 per cent of women soldiers have been sexually assaulted or raped while serving.

Christine Hansen, executive director of the foundation, said at the time that there was a steady upward trend in the number of reported cases of sexual assault, of 10 to 15 per cent each quarter.

2008: The Pentagon reported nearly 3,000 cases of women assaulted sexually in Fiscal Year 2008, an increase of 9 percent from 2007. For women serving in Iraq and Afghanistan, the increase was 25 percent.

2009: The annual report on sexual assaults states, “In FY 09, there were a total of 3,230 reports of sexual assault involving military Service members as either victims or subjects, representing an 11% increase from FY 08.”

2009: Admission by the Pentagon that approximately 80 per cent of rapes are never reported— making it the most under-documented crime in the military.