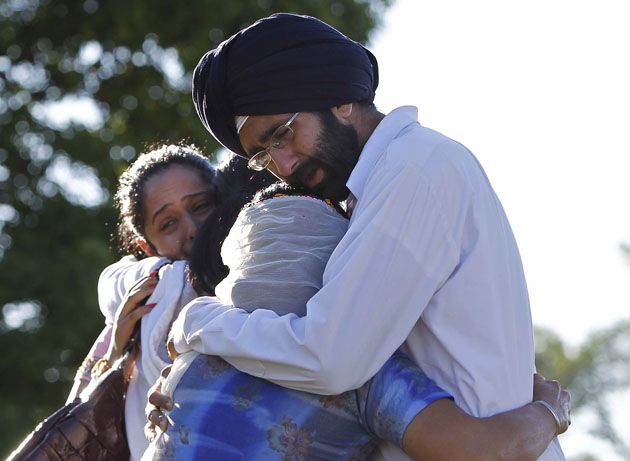 Since the War on Terror was declared more than a decade ago, the US military has done all it can to train and arm its troops to fight — but among its ranks lurk some of the most violent neo-Nazis and white supremacists in America. Thanks to lax recruitment policies and pressure to maintain troop numbers, extremists are slipping into the military to be trained to fight the “race war” they believe is coming when they return home.

We saw one tragic example of the consequences of these policies this past Sunday, as a US veteran and white supremacist, Wade Michael Page, took the lives of six people and seriously injured three more at a gurudwara, a Sikh temple, in Milwaukee, WI before dying of anapparently self-inflicted gunshot wound to his head. It is likely to be only the opening salvo in a growing trend of domestic mass murders as extremist veterans — some afflicted with untreated PTSD and other conditions — return home.

The US Army was put on notice about the dangers of training extremists almost two decades ago. In 1995, military authorities received a rude shock that should have ensured they pay closer attention to supremacist sympathies among its recruits — when neo-Nazi and active duty paratrooper James Burmeister murdered two African-Americans near Fort Bragg — and prevent far-right radicals from gaining access to the highest-grade weaponry (and attendant training) in the world. Indeed, some claim the military was successful in rooting out neo-Nazi elements from its ranks.

But Page served in the military for six years as part of the highly respected psychological ops department — three of those years after the Fort Bragg shooting, even though he was openabout his white supremacist views. And during the War on Terror, the already-loose regulations on recruitment and retention of extremists were jettisoned as the military struggled to keep up troop numbers. In 2005, the US Army missed its recruitment targets by the largest margin since 1979, when the nation was still afflicted with “Vietnam Syndrome” and recruited twice as many soldiers. By 2008, 1.6 million Americans had been recruited to serve. Testimony from far-right leaders and veterans as well as internal reports by the Criminal Investigative Command (CID), the military’s investigative branch, show that during the War on Terror nothing was done to either stop the recruitment, or the retention of, neo-Nazis. The concerns of investigators and troops themselves was ignored all the way up to Congress.

In addition, the US military ostensibly has a ban on its soldiers having racist tattoos or taking active roles within white supremacist groups, but the regulations are vague and rarely enforced. Neo-Nazis are known to often join the military to gain weapons training in order to come back and start the domestic “race war” they believe is coming. Struggling to readjust to life back home after traumatic tours of Iraq and Afghanistan, some veterans are radicalized upon their return, finding solace in extremist organizations; this problem was highlighted by the Department of Homeland Security in a 2009 report (though Homeland Security Secretary Janet Napolitano issued an apology after veterans’ groups took offense.)

Page himself was given an other than honorable discharge, which made reenlistment impossible, but since the September 11, 2001 attacks, this means of rooting out extremists fell by the wayside. Troop needs meant that the military could no longer afford to kick out extremist veterans or any other misbehaving soldiers. They had two occupations to populate, after all.

As I write in my book, Irregular Army: How the US Military Recruited Neo-Nazis, Gang Members and Criminal to Fight the War on Terror, which is out in September:

The [statistics] show that the avenues the army guidelines stipulate for dealing with extremists already serving in the military have been drastically reduced since 1998, and increasingly so since the War on Terror was initially announced. One such avenue is the denial of reenlistment, which fell from a high of 4,000 soldiers rejected in 1994 to a low of 81 in 2006. Another is a soldier receiving misconduct charges resulting in discharge from the army. In the five-year period from 1998 to 2003 the number of discharges for misconduct teetered from a high of 2,560 to a low of 2,307. But by 2006 this number had fallen off to 1,435.

Page was the leader of a white power punk and metal band, End Apathy, that he started, according to a 2010 interview he gave to the white supremacist music website Label 56, because he wanted to “figure out how to end people’s apathetic ways;” the band was meant to “be the start towards moving forward.” The Southern Poverty Law Center, which monitors extremist groups, says that End Apathy was linked to the Hammerskins skinhead organization, which is “the most violent skinhead group in the US,” according to the Anti-Defamation League. One of its members, Forrest Fogarty, played a lead role in my 2009 Salon/Investigative Fund article, “Neo-Nazis Are in the Army Now.” Fogarty, who served in the military police in Iraq from 2003 to 2004, also has his own neo-Nazi band called Attack. When I interviewed Fogarty in Tampa, FL, he gave me one of his albums. One of the songs on the album, “Eye For An Eye,” opens with these ominous lines: “A slow painful death I strive / Why are you still alive?” Disturbingly, Fogarty, who said that his time in Iraq only increased his racist resolve, left the army with an honorable discharge and says he was even asked to reinlist. He declined.

Some neo-Nazis are linked to crimes within the military and others to recruitment efforts for the far-right. Wade brought his war stateside, though he wasn’t the first to commit murder in the United States, and it is unlikely he’ll be the last. There have been countless such cases over the past decade. In 2005, neo-Nazi James Douglas Ross was caught trying to mail a submachine gun back from Iraq to his father in Spokane, Washington. In 2007, neo-Nazi Kenneth Eastridge was part of a team of three which killed a fellow soldier in Colorado Springs. In March 2011, the FBI arrested Kevin William Harpham, a 36-year-old member of the neo-Nazi National Alliance, also in Spokane, Washington, on suspicion of planting a bomb, which if detonated would have killed hundreds of people, at a Martin Luther King Day celebration. Harpham had served in the army for two years in the mid-1990s.

There are undoubtedly many other Wade’s out there, battle-hardened and, thanks to the US military, trained in using the most sophisticated weaponry known to man. The Okalama City bombing, the deadliest case of domestic terrorism prior to September 11, was carried out by decorated Gulf War veteran Timothy McVeigh in 1995. More recently, Nidal Malik Hasan, the alleged Fort Hood shooter who killed 13 fellow soldiers, comes to mind, as does Jared Loughner, who shot dead six people in Arizona and grievously wounded Rep. Gabrielle Giffords. Loughner, who tried to enter the military not long before his shooting spree, was only disallowed after telling them that he had used marijuana — something he could have easily lied about, as many others surely have. When the barriers to entry to the US military are so flimsy, it’s only a matter of time before we hear about the next tragedy.

Matt Kennard is an investigative journalist working for the Latin America Bureau in London.