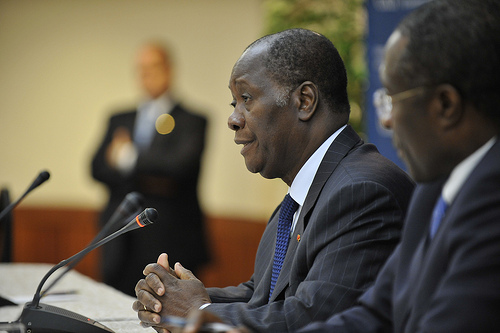 Charles Ble Goude, the leader of an Ivory Coast youth militia who was arrested last month after nearly two years on the run, does not know where Ivorian authorities are keeping him.

Speaking after Ble Goude’s second appearance before judges in the commercial capital of Abidjan on January 30, Herve Gouamene, a member of the militia leader’s legal team, could say only that his client was being “held in a house somewhere.” The lawyers have had limited access to their client, in apparent violation of Ivory Coast’s criminal procedure code, and Ble Goude himself does not know precisely where he is taken when he’s not in court.

During Ivory Coast’s 2010-11 post-election violence, Ble Goude headed the Young Patriots, an ultranationalist youth group that Human Rights Watch has implicated in hundreds of killings. The conflict began after former President Laurent Gbagbo refused to concede defeat in the November 2010 presidential runoff vote, triggering a power struggle with his rival for the top post, Alassane Ouattara. The UN estimates that more than 3,000 people were killed during five months of fighting.

A Gbagbo ally known as “the street general,” Ble Goude gave several speeches that HRW says coincided with upticks in violence against northern Ivorians and West African immigrants, groups that generally supported Ouattara. In its report on the violence, the rights group said it believed Ble Goude “to be credibly implicated in crimes against humanity.”

His arrest on January 17 in the coastal Ghanaian town of Tema was welcome news to Ouattara’s government, which has been pushing the administration of Ghanaian President John Dramani Mahama to execute more arrest warrants issued against Gbagbo allies exiled in his country. But the swift transfer of Ble Goude into Ivorian custody was greeted with apprehension by some observers.

“Ble Goude’s arrest shows that Ghanaian authorities are taking steps to ensure the country will not be used as a safe haven from justice,” said Corinne Dufka, senior West Africa researcher for HRW. “They now need to accord Ble Goude his full due process rights, including ensuring that there is no credible risk of inhuman treatment or torture if they extradite him to Côte d’Ivoire.”

Concerns about the potential maltreatment of Ble Goude are rooted both in recent abuses committed by Ivory Coast’s military as well as the detention conditions faced by high-level Gbagbo allies since the war ended nearly two years ago. No Ouattara allies have been arrested.

According to Ivory Coast’s UN mission, there have been 23 different attacks committed by unidentified gunmen since last August, mostly against military installations, killing 60 people, including soldiers and civilians. Ouattara’s government says Gbagbo allies in Ghana and Liberia are coordinating the violence, an allegation that HRW calls “credible.” In response, Ivorian authorities have undertaken a widespread campaign of arbitrary arrest and detention, featuring beatings and more extreme forms of abuse, such as the use of electric shock at a camp in the southwestern port town of San Pedro. The latest — and as yet unreleased to the public — report from the UN’s independent expert on Ivory Coast, Doudou Diene, says that two people swept up in this campaign have died from torture.

That same report, due to be presented to the Human Rights Council in Geneva in March, also criticizes the detention conditions faced by Gbagbo allies that have been arrested and charged with crimes related to the post-election violence. In the northern town of Korhogo, for instance, detainees were “crammed into small cells in a very advanced state of disrepair” during the independent expert’s mission late last year. Gbagbo’s wife, Simone, “showed signs of physical weakness” when Diene visited the site where she is under house arrest in Odienne.

Beyond Ble Goude’s treatment, there is widespread concern about whether it is possible for him to receive a fair trial in Ivory Coast, given the one-sided victor’s justice applied by the Ivorian judiciary so far (a pattern I documented in my September 2012 investigation for The Investigative Fund/World Policy Journal). While 55 Gbagbo allies have been detained and charged with violent crimes committed during the conflict, no fighters on Ouattara’s side have been detained or even credibly investigated.

The government has denied allegations of victor’s justice, and officials have increasingly argued that Ivorian courts are capable of trying post-election violence crimes. Although the International Criminal Court issued an arrest warrant for Simone Gbagbo last November — the first time in its ten-year history it has done so for a woman — no public decision has been taken by the government on whether to green-light her transfer to The Hague, leaving some to speculate that the government wishes to try her at home instead.

Ali Ouattara, chairman of the Ivorian Coalition for the International Criminal Court, remains unconvinced that the judiciary can handle such cases. Moreover, he said the current situation of one-sided justice would prove untenable if Ouattara aimed to foster genuine reconciliation between the two sides.

Though he called Ble Goude’s arrest “a strong signal in the fight against impunity,” he said it was not nearly sufficient. “We call on the Ivorian authorities to go further by targeting not only pro-Gbagbo fighters,” he said. “Justice must not be at two speeds.”

Fernand Gninin, a 38-year-old resident of the western town of Duekoue, where Ouattara fighters allegedly committed the largest single massacre of the violence, knows full well the cost of Ivory Coast’s unbalanced justice. When I interviewed him last April, he described how he had been rounded up by soldiers from the national army, the Republican Forces of Ivory Coast (FRCI), and interrogated at the local military camp the previous month, nearly a full year after the conflict ended. He was among a group of 11 men belonging to the Guere ethnic group, which largely supported Gbagbo in the 2010 election. The group also included a DJ who had spoken out against FRCI abuses during his set the previous night, drawing the ire of the camp commander. During his time in custody Gninin was made to lie down on the asphalt while soldiers beat him with an orange pole. The scars on his back are still visible.

Reacting to Ble Goude’s arrest, he said, “For me, the fact that no Ouattara supporters have been arrested for their roles in the post-election violence is proof that justice in our country is not fair and equal for all citizens,” he said. “It is rather a justice for the winners — justice for those who won the post-electoral fights. We all know that some pro-Ouattaras were involved in some way in the violence, and they must be arrested and tried for what they did.”

Robbie Corey-Boulet is an associate editor at World Politics Review, focusing primarily on news from sub-Saharan Africa as well as LGBT rights.