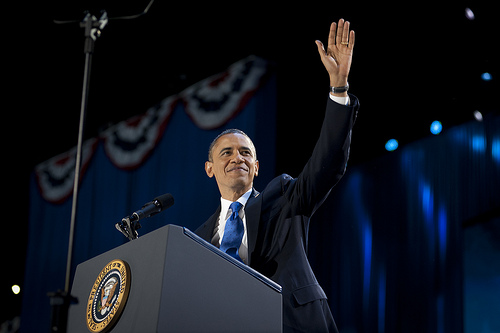 Charles Koch, the chief executive of Koch Industries who is worth an estimated $34 billion to $44.6 billion, has a new letter to his employees. Koch and his brother spent more than ever in the last election, financing anti-Obama attack ads, phone banks voter contact efforts and more — but came up short. In his letter, sent to tens of thousands of employees through the Koch Industries’ “Discovery” newsletter, Koch warns that “November’s election results … are part of a trend that, if not reversed, will destroy the American dream.”

The letter hits familiar themes, claiming regulation and taxation will ruin the economy and posits Koch’s political intervention as our only savior. Koch also implies more big-money spending on campaigns and political groups, writing, “As a company, we are committed to doing what is right in every aspect of our business. That is why we will continue doing everything we can to persuade politicians to put what is good for the country first, before it is too late.”

In a quasi-letter to the editor section of Discovery, there’s an array of letters all competing to heap the most praise on the Koch brothers and their patriotism. It really should be viewed in its entirety, just as a specimen of the bubble that some of the ultra-rich live under, but here’s a representative sample:

Dear Mr. Koch, Thank you, thank you, thank you — to your brother David and you — for being such fine and patriotic Americans. The courageous and principled stands that you take to help us retain and restore our liberty are truly inspiring. You are doing so much good for so many.—Larry Saunders Registered commodities rep. Franklin, Tenn.

Dear Mr. Koch, I want to thank you and your family for all you have done during this past election. The results are tough to acknowledge; however, the efforts that you put forth make me very proud of the company I work for. —Gretchen Chartier Koch Industries, Inc. Scottsdale, Ariz.

There’s even a letter from Stanley S. Hubbard, CEO of a media company that owns several NBC and ABC stations, who wrote, “Charles and David, please know that you can count on me, my wife and our family to stand foursquare with your ongoing efforts to preserve our unique American way of life.”

Past the exhalations of the Dear Leader, there’s a weird tension evident throughout the letter. Koch spends much of his piece complaining about the “crippling policies we have experienced in recent years,” comparing Obama’s government to the path of the former Soviet Union and Venezuela. Yet, other parts of the same newsletter boast that Koch Industries has never been better, with thousands of job openings, new acquisitions of smaller companies and plant openings. The economy has been so good, Koch Industries’ headquarters has been going through a major expansion.

The economy has been so crippled under Obama that the Koch brothers have both more than doubled their fortune. The Forbes list estimates Charles and David Koch were worth $14 billion each in 2009. The same list released this year now says they’re each worth $34 billion. And as Charles notes in his letter, 85 percent of his employees and a majority of his company’s assets are in the United States.

How can Obama’s policies be so horrible if the economy is doing so well for Koch? A critic could point to certain wasteful programs or an outdated regulatory scheme, but how Koch has prospered so much under policies he says are destroying the economy, he doesn’t say. It’s a one-dimensional letter, so these questions aren’t explored.

There are aspects of Koch’s letter that liberals may find common cause with, particularly his spirited denunciation of crony corporations and overbearing regulations concerning occupational licensing. On Page 5, there’s even an infographic that features Koch’s “Clean Air & Sustainability award” and the company’s sponsorship of “Green School grants.”

This high minded rhetoric and claims of environmental stewardship are little more than public relations spin.

Since the late eighties, Koch has been the premiere financier of groups dedicated to suppressing environmental science. Citizens for a Sound Economy (now known as Americans for Prosperity) unsuccessfully attempted to mobilize populist anger at regulations aimed at curbing acid rain and smog pollution. The company lobbied aggressively to cut environmental regulations around the time it was caught causing more than 300 oil spills in six states. More recently, Koch money has flowed to over fifty conservative nonprofits and media figures that have worked to suppress and discredit the science underpinning global warming. The tactics aren’t pretty. Last year, one Koch-backed think tank ran a billboard comparing belief in global warming to support for Ted Kacynski, the Unabomber. Koch-backed groups have harassed climate scientists, financed a small army of climate denying politicians, and even sponsored a “moon bounce in the shape of a SWAT car for children,” which symbolized the boogeyman of Environmental Protection Agency “Carbon Cops.”

Why the obsession with global warming? The “freedom” Koch discusses seems to relate to the freedom to pollute. Koch’s business empire, according to an estimate by Brad Johnson, emits several hundred million tons of carbon dioxide a year. The political suppression of climate science, and any reasonable response to the climate crisis, clearly benefits Koch Industries’ bottom line — and such selfish lobbying at the expense of the common good is the very worst example of crony capitalism.

The company may soon gain an even larger audience. Earlier today, news reports revealed that Koch may purchase at least the newspaper division of the Tribune Co., which includes the Los Angeles Times.