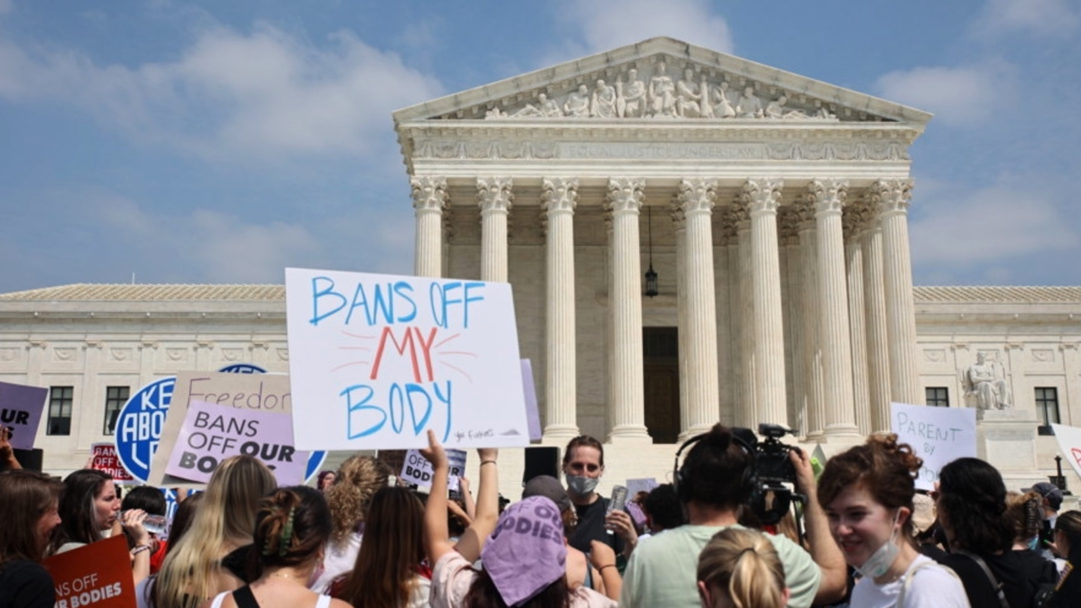 Pro-choice protest in front of the U.S. Supreme Court in response to the leaked news about Roe being overturned. Image: Robyn Stevens Brody/Sipa USA/AP Images

The leaked draft of an apparent majority opinion by Justice Samuel Alito in Dobbs v. Jackson Women’s Health Organization, overturning Roe v. Wade, revels in shaming and punishing women who have abortions and the doctors who perform them. It is the crowning achievement of a Christian nationalist movement that has come to dominate American politics, consolidating its power in the Trump era. Centered on what it claims are biblical imperatives about sexual purity, this movement represents a minority view in the country as a whole, but a majority of the Supreme Court and legislatures in red states.

The Supreme Court’s decision, if finalized, will be the most powerful endorsement of the movement’s trend of imposing increasingly punitive measures against reproductive rights. The past year alone has already seen a rash of attempts (and some successes) by Republican leaders and legislators to criminalize abortion, and to deputize ordinary citizens as bounty hunters in turning in their neighbors, girlfriends, and even complete strangers if they perform an abortion or help someone else do so.

But such tactics don’t stop with reproductive rights—LGBTQ rights are also under threat by similarly regressive legislative attacks. Led by Arkansas in 2021, Republicans have sought to criminalize health care for trans minors, leading to copycat laws in other states and a state-run campaign in Texas for the child protective services agency to investigate parents of trans kids who receive gender-affirming medical treatments. Alito’s opinion in Dobbs not only fulfills the Christian right’s decades-long ambition of overturning Roe but very explicitly gives them license to enact the harshest regime they can imagine to defend what they claim are the biblical values of a Christian nation. It creates a post-Roe world in which state legislatures feel more empowered to escalate their attacks not only on reproductive rights but on LGBTQ rights as well.

The draft reveals a justice single-mindedly bent on mining the historical record to support his claim that the Anglo-American legal tradition had for centuries prosecuted and punished abortion until a lawless court, in 1973, turned everything upside down. As the historian Cassandra Berman pointed out on Twitter, it is a “gross mischaracterization” to claim, as Alito did, that in the United States “an unbroken tradition of prohibiting abortion on pain of criminal punishment persisted from the earliest days of the common law until 1973,” when Roe was decided. In fact, through the 18th century, and until the 19th century, American common law permitted abortions before “quickening,” the point at which the fetus’s movements could be felt. Alito seems to revel in the vicious details of how a male-run legal regime could shame women; for a jurist who claims that cases should be decided based on the constitutional text, as he argues in the Dobbs opinion itself, he spends a lot of time on English common law, even citing a legal treatise dating back to the 13th century.

He quotes a 1732 publication, Gentleman’s Magazine, which he says reported the case of Eleanor Beare, convicted of “destroying the Foetus in the Womb,” and sentenced to two days in the pillory and three years in prison. That means that Beare, if this story told in a “gentleman’s” magazine is accurate, spent two days restrained by her head and hands so that she could be exposed to public scorn and ridicule. Alito’s citation of the case recalls the time, in 2009, when the anti-choice activist Lila Rose suggested to the Values Voter Summit that abortions take place “in the public square” so that people would rebel against them in disgust. Alito spends considerable time detailing how these male legal commentators believed abortion to be “murder,” a “great crime,” and “a very heinous misdemeanor.” The judge in the Beare case, he took time to note, said that “he had ‘never met with a case so barbarous and unnatural.’”

Disgust is the primary tool the Christian right is deploying in its campaign against LGBTQ rights as well. As I have reported for Type Investigations, movement leaders have been unequivocal that their strategy to erode and eventually overturn Obergefell v. Hodges, the landmark 2015 case striking down bans on marriage equality, will mirror the one they deployed against Roe. In other words, until the time comes that the Supreme Court is ready to strike it down, they will work in and with state legislatures to chip away at that right—by claiming, for example, that religious freedom demands that they be exempt from laws protecting LGBTQ people from discrimination, or by attempting to restrict the rights of same-sex couples to adopt children or other rights adjacent to their constitutionally protected marriage rights.

One of their first campaigns in the post-Obergefell world was to try to ban trans people from gender-appropriate bathrooms and locker rooms. That, too, was based on disgust. More recently, activists and their allies in Republican state legislatures have upped the ante: Not only should trans people be shamed and banished, but their very health care should be considered child abuse and criminalized.

Republican legislators have seen results here because anti-choice and anti-LGBTQ activists hold considerable sway in red statehouses. That’s why Alito’s bizarre claim that Roe’s opponents “could no longer seek to persuade their elected representatives to adopt policies consistent with their views” is so dangerous. Not only is it factually wrong—the whole reason the Dobbs case was before the court was because anti-choice activists had spent decades trying to find a case to overturn Roe by passing ever-more draconian laws in state legislatures—it perpetuates Christian right’s sense of victimhood in a secular culture.

This would not be the first time Alito pressed that trope. In his dissent in Obergefell, Alito wrote, “I assume that those who cling to old beliefs will be able to whisper their thoughts in the recesses of their homes, but if they repeat those views in public, they will risk being labeled as bigots and treated as such by governments, employers, and schools.”

In the draft Dobbs opinion, Alito protests that abortion is “unique” and therefore his opinion does not endanger other rights, including LGBTQ rights. Alito cites Obergefell and Lawrence v. Texas, the 2003 case striking down laws criminalizing sodomy, as evidence that the court can and will overturn faulty precedent, as a justification for why he believes Roe should be overturned. But elsewhere in the opinion he signals that, just as with Roe, the rights secured in Lawrence and Obergefell do not have “any claim to being deeply rooted in history.” By the logic of his opinion—and the known ambitions of the religious right—those rights are in grave danger, just as reproductive rights are.

The consequences are not difficult to imagine. An overturning of Lawrence could embolden anti-LGBTQ legislators to revitalize anti-sodomy laws. Millions of Americans could be exposed to criminal liability for their private sexual conduct.

In the closing of his opinion, Alito sets his virtuous but supposedly repressed foot soldiers free. “The Constitution,” he writes, “does not prohibit the citizens of each state from regulating or prohibiting abortion.” By overruling Roe, he writes, the court will “return that authority to the people and their elected representatives.” He’s wrong that they felt disempowered before, but he is ominously right that they are going to feel even more empowered now.