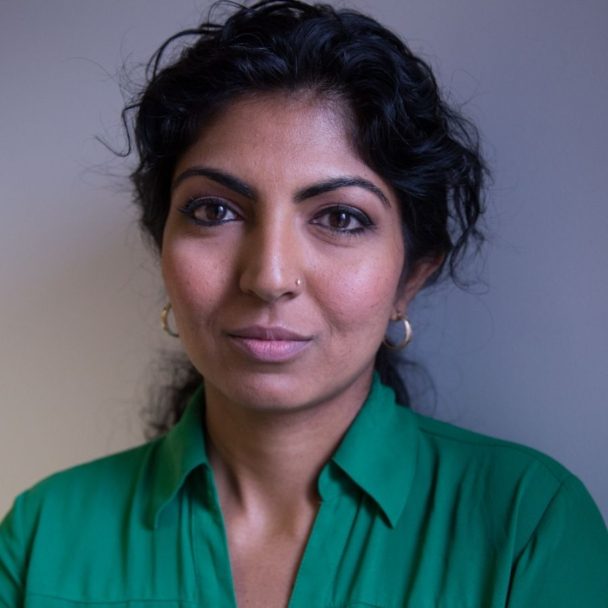 Anjali Kamat spent months in India investigating the Trump Organization’s lucrative real estate deals in the country, valued at an estimated $1.5 billion. In “Political Corruption and the Art of the Deal,” published in partnership with the New Republic, Kamat reveals how the Trump family’s real estate partners in India are connected to an extensive history of lawsuits, police inquiries, and government investigations, with evidence of potential bribery, fraud, intimidation, illegal land acquisition, tax evasion, and money laundering also prevalent. The investigation exposed the many corruption red flags surrounding the Trumps’ projects in India, and President Trump’s conflicts of interest that will persist throughout the course of his presidency. This project also formed the basis of two episodes of Trump Inc., a podcast series from WNYC and ProPublica. — Elena Mejia Lutz

Elena Mejia Lutz: How did you start cultivating this project? Why were you expecting to find such a large history of lawsuits or government investigations behind the Trumps’ India partners?

Anjali Kamat: I guess right after Trump got elected, there were a couple of news reports that I was seeing in India about how the Trump Organization’s largest overseas portfolio of licensing deals was in India and about nine or 10 days after the election, he had a group of visitors from India. This was his second set of international visitors. The first included the Japanese Prime Minister, and the second set of international visitors were three of his Indian real estate partners — real estate developers from India who are his business partners on some of his deals in India. That got a little bit of attention here and I got really curious about looking into who these guys were and some of the preliminary reporting that I saw in the New York Times and the Washington Post and the Indian media talked about how at least a couple of the Trump Organization’s partners had close ties to elected officials who were in the ruling party that’s currently governing India right now. And one of those partners is actually a sitting elected official. He’s a five-term state lawmaker. That just turned up my antennae and I was like, “Oh, what is going on here?” because one of the things that I was aware of was that real estate in India is a very, very, very corrupt sector. It’s something that’s very well known. The World Bank Group ranks India 181 out of 190 in terms of getting a construction permit. People in India frequently talked about a builder-politician nexus. There’s been dozens of media investigations in India about the ties between developers and powerful political officials and also various investigations into developers in general about allegations of money laundering and tax evasion. Luxury real estate, in particular, in India as—in around the world—is notorious for being a place for people to sink their unaccounted wealth. So, I was just curious. I was like, “Well, what is going on here?” I was talking to Esther about it at The Investigative Fund and we had a meeting soon after the election to talk about how we wanted to cover the Trump presidency and one of the focus points was looking at Trump Organization businesses around the world. Esther and I talked about how it would be good to look into the India deals in particular. So, I started looking into it while I was in New York and then spoke to several Indian journalists who cover real estate, spoke to different people in India and then decided to spend as much time as possible in India on the ground digging into this.

Mejia Lutz: How did you manage to develop the project using both print and audio? How do you make sure you’re getting what you need and getting enough information for both platforms?

Kamat: That’s a good question. I mean, I didn’t really know when I started off on the project. I didn’t really have a sense of what the outlet would be and what the medium would be — whether it would necessarily be print or audio. I mean, I come from a documentary TV background so I did think about whether this is a story that would work for television. I felt pretty quickly that it wouldn’t because one of the things that became very clear — even just in like the initial calls I was making from New York to different people who are real estate experts, who have covered this beat for years — is how careful people are about what they want to say in public. I realized that getting anyone to speak to me was going to be a challenge and getting anyone to speak to me on camera was going to be nearly impossible. So, I thought about it primarily as something for print or audio and in general, when I’m reporting, I like to record my interviews so I have an audio backup of it both just for safety and also for accuracy, but also just for always leaving open the possibility of working in a different medium. It’s something I told different people as I was interviewing them, like, “I’m recording this.” I had a mic. I also recorded some interviews on my phone, but you know I think coming from a TV background and also having worked in radio in the past at Democracy Now!, which was both radio and TV, I just always like to have options. So, it wasn’t that hard, in some ways, in terms of during the reporting phase. One thing I didn’t do much of because I wasn’t quite — didn’t have an outlet in mind — is I didn’t do a lot of stand ups or get a lot of ambient sound along the way on my first round of my visits to India. But then when I went back in January, I did get a little bit more of that because I knew it was going to be coming out in audio as well.

Mejia Lutz: What was the reporting strategy behind navigating the real estate industry in India to get documents, police reports, and knowing the legalities behind questionable permits?

Kamat: I worked with a few Indian journalists who were absolutely crucial to this reporting: people who have been covering real estate for a long time, who are investigative journalists and who were very, very helpful in giving me tips on how to navigate this world and on helping me get access to the right people, get access to the right documents and also just getting people to trust me enough to talk to me since, these are people that they’ve been working with for a long time.

Mejia Lutz: What was the Investigative Fund’s role with this story? How was this project pushed forward by this organization from the very beginning?

Kamat: I mean this project would not have happened without The Investigative Fund from start to finish. Esther Kaplan, in particular, was the person who was excited about the story from the very beginning and thought that this was a story and was something that we should pursue. [She] was willing to put the time and the resources into this reporting project, into collaborating with different Indian journalists, into making sure that I had the time and the resources to do the kind of detailed reporting that allowed the project to be completed. I’ve been working on this since we started talking about this in November-December of 2016 and it’s now March 2018. So, it’s been over a year of constant support and feedback, both in terms of the editorial direction and the types of questions to ask, the kinds of legal questions to be asked, the kind of legal checking that needs to be done, but also just pushing the story forward at every point trying to find outlets that are interested in it. I think for a while, the story — initially, I think that the sense was, “Well, you know, if Trump has corrupt Indian partners, who cares?” That was the reaction I was getting from a lot of people in India. Certainly, because they were like, this is such a corrupt environment, you know? But really persisting with the story despite all the doubts and the sense that we need something that’s a real smoking gun and having the confidence that this is an important story to tell — like digging deep and laying out the kind of complicated threads that make up the story to present a picture that in the end is quite damming — all of that came from The Investigative Fund.

The Investigative Fund was absolutely central both in framing the story right from the start and believing in the project all along the way, supporting the reporting, providing the time and the resources in making sure that I was able to have the time I needed to do this kind of gargantuan reporting project and then being incredibly supportive and guiding the process of finding outlets to partner with that would ultimately publish the story, both in print and audio.

Mejia Lutz: What was the reporting strategy you used to put every piece of the puzzle together, you know, year by year, trip after trip to India? How did you keep your timeline to successfully connect India business developments to Trump’s campaign and presidency?

Kamat: That was definitely a hard part of the project, but I spent — I have so many different timelines. I drew up timelines for every project, timelines for every partner with their entanglements with the law, timelines of what the Trump Organization was doing, timelines for Trump’s entry into politics and a timeline of the Trump family visits to India. And trying to make sense of all of this information along with my visits to different projects and what people on the ground were telling me and where it matched up and where it didn’t match up. Then going back and checking again and trying to find documentary evidence as far as possible in terms of trying to see where it matched up with the plans that were submitted and the dates on those. It was definitely a long and complicated process.

Mejia Lutz: When you were doing your research, did you assemble as many news stories as you could and then looked at official government documents to trace everything that happened? How did you manage to keep track of every piece of information?

Kamat: Yeah, I mean one of the things is, the Trump Organization declined to speak with us despite repeated requests. And for the most part, the developers didn’t speak with me either. So, the story had to be piece together without hearing directly from them. And the Trump Organization is not exactly a transparent organization. We know very little about how it does business anywhere in the world. So it was about piecing together the timelines and understanding what happened based on the very limited disclosures that Trump has made in his ethics filings. using the timeline from that, matching it up against news reports over the past 10 years, what interviews the Trump family or members of the Trump Organization or the Trump Organization’s business partners have given to media organizations at different points in time, different press releases and also speaking to journalists who had met or interviewed anyone from the Trump Organization or their partners, speaking to journalists who have covered the real estate beat for a long time and understand the reputations of these partners were able to give me a very well-informed assessment of that. Also matching it up with whatever documents I was able to get in terms of the actual plans and permits for the project and matching it up with the dates of that.