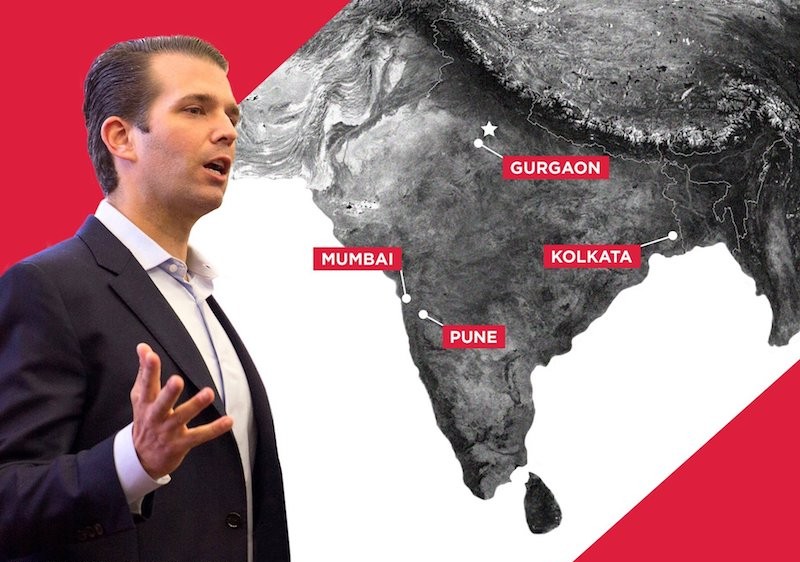 President Donald Trump does not like the Foreign Corrupt Practices Act. “It’s a horrible law,” Trump has said. The FCPA makes it a crime for U.S. companies to bribe foreign officials, or to partner with others who are clearly doing so.

Trump has argued that the law puts U.S. firms at a disadvantage. “It’s things like this that cause us to not be able to lead the world,” Trump said on CNBC in 2012. “For this country to prosecute because something took place in India is outrageous.”

Corruption in India is quite common, particularly in the real estate industry. India’s also where the Trump Organization has four projects currently under construction and another just completed, more than it has in any other foreign country. As we detailed last week on Trump, Inc., Donald Trump Jr. has been closely involved in much of the work.

This week, we’re looking at the Trump Organization’s partners in India — and red flags their work has raised. We worked with Investigative Fund reporter Anjali Kamat, whose story on the Trumps’ business in India appears in the latest issue of The New Republic.

Kamat traveled to the location of each of the four projects that are still under construction. Here’s what she found:

What Trump Jr. has billed it as: Kolkata’s “first residential building with floor to ceiling glass.”

What’s there now: The foundation and a billboard

The red flags: Back in 2011, the RDB Group’s directors were charged with insider trading and were barred from the Indian stock market for four years. Also, the day after Trump Jr.’s visit, tax officials raided RDB’s offices over alleged “financial irregularities.” The group did not comment on the raid at the time.

Their response to us: None

The project: A residential tower in Gurgaon, a suburb of New Delhi

What Trump Jr. has billed it as: “The most prestigious address in the city”

What’s there now: A small patch of empty land

A partner: M3M, which stands for “Magnificence in the Trinity of Men, Materials & Money”

The red flags: Tax investigators seized about $70 million of undeclared money from M3M offices in 2011. The company later paid back taxes on the money, according to the Washington Post. Last year, a forest official filed a complaint alleging the company bribed forest guards to illegally cut trees. We couldn’t find any response from M3M about the alleged bribes.

Their response to us: None.

The project: An office tower in Gurgaon

What Trump Jr. has billed it as: “One of the most exciting and sought after commercial towers in India and beyond”

What’s there now: An empty lot with goats grazing

The red flags: Last month, two investment companies filed a criminal complaint against IREO for defrauding investors of nearly $150 million. It cites the former CEO, who said he witnessed “various acts of cheating, fraud, and misappropriation of money.”

Their response to us: None. In a letter to investors earlier this month, IREO’s managing director called the charges “false, baseless and devoid of any merit.”

What the Trumps have billed it as: “The most spectacular addition to the Mumbai skyline.”

What’s there now: The tower is almost complete

A partner: The Lodha Group

The red flags: Officials at multiple Indian agencies told Kamat they had been looking into allegations of money laundering, tax fraud, and violations of foreign exchange regulations involving Lodha Group subsidiaries. No charges have been brought.

Their response to us: None. The Lodha Group has previously responded to one reported investigation, saying they were not aware of it.

Neither the White House nor the Trump Organization spoke to us for this story.

This article was reported in partnership with the Wayne Barrett Project at the Investigative Fund.