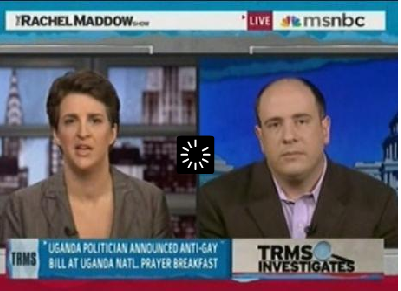 Producing an award-winning investigative story like this is no easy feat. You can make it possible by donating to The Investigative Fund today.

On October 2009, David Bahati, a Ugandan member of parliament close to a secretive US evangelical group, The Family, introduced the bill, which made homosexuality a capital offense. Despite near-unanimous support in Parliament, the bill has yet to pass — a delay that Bahati himself attributes to Jeff's reporting, and the subsequent international outcry. Exposing such outrages is what The Investigative Fund is all about.

This risk-taking journalism depends on the support of individuals like you. Please make a donation today!

Another Investigative Fund reporter, Aram Roston, will receive one of journalism's biggest awards tomorrow, at the Investigative Reporters & Editors conference, for his series on the financial dealings of New York mayor Michael Bloomberg.

“Bloomberg's Offshore Millions,” published in the New York Observer, showed how the mayor has invested his charitable funds in overseas tax havens. The articles sparked a flurry of follow-up reporting by The Associated Press, The Village Voice, ABC, Salon, Gawker, and The Huffington Post. The billionaire mayor, who often receives kid glove treatment from the press, finally got pelted with questions.

Several other Investigative Fund stories have picked up journalistic laurels this year: Mike Hudson's exposé, published on The Big Money, of how major lenders silenced and even punished their internal fraud investigators in the lead-up to the subprime mortgage crisis; Amanda Robb's investigation into the murder of abortion provider Dr. George Tiller, published in Ms.; and Mac McLelland's intrepid reporting on the harsh repression of ethnic minorities in Burma, published in Mother Jones.

Another of our award winners is Jason Berry, for his takedown of Father Marcial Maciel Degollado, who abused children inside his Catholic order and then used vast sums of money to buy quiescence from the Vatican. The series, published in National Catholic Reporter, showed for the first time how corruption helped silence the Church on sexual abuse. Tom Roberts, an editor there, says, “The Investigative Fund provides serious reporters and news organizations the means to do the difficult work of digging out the truth that those in power want to keep hidden.

The work we produce is rich, but our project is not. We run a lean operation that depends exclusively on small foundations and donations from individuals like you who care about brave reporting. Won't you take a moment today and support this important and challenging work?