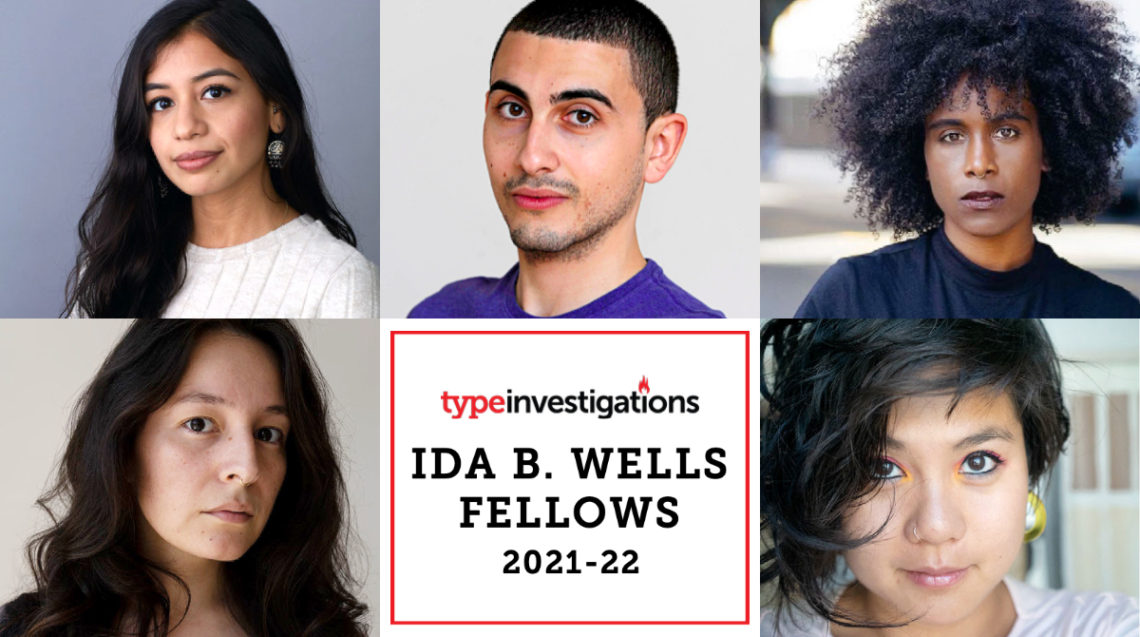 Type Investigations is pleased to announce the 2021 Ida B. Wells Fellows. The fellows are emerging and mid-career journalists working in a variety of media formats and outlets.  Each fellow receives a $20,000 stipend, plus funds to cover reporting costs for their first substantial piece of investigative reporting. During the year-long program, fellows receive intensive editorial feedback, legal counsel, research resources, mentoring, story placement, and publicity assistance.

“These reporters each bring a wide range of experiences and perspectives to their work,” said Alissa Figueroa, senior editor and senior producer at Type Investigations and director of the Ida B. Wells Fellowship Program. “As we've seen so acutely in the last year, having investigative journalists with a personal understanding of the complex issues impacting different communities is crucial.”

Now in its sixth year, the Ida B. Wells Fellowship competition is held annually. Last year, we began selecting a Southern Fellow drawn from a nine-state region in the south, where Ida B. Wells was from and where her anti-lynching reporting was based.

Learn more about the Ida B. Wells Fellowship program and past fellows here.

LILA HASSAN
Lila Hassan is a New York-based investigative journalist who focuses on extremism, human rights, and immigration. She has reported from Cairo, Istanbul, Paris, and all five New York City boroughs. Currently a Tow Reporting Fellow at FRONTLINE PBS, Hassan writes digital stories and is a researcher for investigative documentaries. Her work has appeared in Reuters, The Guardian, ProPublica, Kaiser Health News, Documented, and Human Rights Watch. She holds a B.A. in political science from Brooklyn College’s Scholars Program and an M.S. from Columbia Journalism School’s specialized Toni Stabile investigative program. She will report on ICE arrests and accountability.

AMIR KHAFAGY
Amir Khafagy is an award-winning New York City-based freelance journalist. Much of Amir's beat explores the intersections of labor, race, class, immigration, and urban policy. His reporting has been featured in The New Republic, Vice, Bloomberg, The Guardian, The Appeal, Jacobin, and In These Times. Amir has been awarded The International Center for Journalists COVID-19 Reporting Award, The New Economics Reporting Fellowship, The Economic Hardship Reporting Grant, The Talk Poverty Writer Workshop Fellowship, The Asian American Writers Workshop Open City Fellowship, and The AARP Freelance Fellowship. He holds a BA in Urban Studies and an MA in Urban Affairs from Queens College. He will be reporting on labor and the criminal justice system.

BOBBI-JEANNE MISICK
Bobbi-Jeanne Misick is our Southern Fellow. She’s a New Orleans, Louisiana-based journalist and a reporter for NPR member-stations WWNO and WRKF, where she covers health, criminal justice and social justice issues. Much of her work as a reporter and producer has focused on the Caribbean, where she covered a range of topics from violence against LGBTQ youth, gay marriage and teen pregnancy to extrajudicial killings, misuse of police resources and the rise of extremism in the region. Bobbi-Jeanne’s work has appeared in ESSENCE Magazine and on NPR. She is a graduate of the Craig Newmark Graduate School of Journalism at CUNY. She will be reporting on immigration asylum and parole policies in the deep south.

ADREANNA RODRIGUEZ
Adreanna Rodriguez (she/ella) is a Lakota/Chicana artist based in Oakland, CA.  As a storyteller, her research, writing, and filmmaking revolve around issues of social and climate justice for Indigenous communities, as well as femme stories. Adreanna is currently working as an Associate Producer at VICE Audio.  She holds a M.A. in Visual Anthropology from San Francisco State University and a Graduate Certificate in Documentary Studies from the SALT Institute for Documentary Studies at the Maine College of Art in Portland, Maine.  She will be investigating reproductive health care and access to abortion services within Indian Country.

LAM THUY VO
Lam Thuy Vo is a reporter who digs into data to examine how systems and policies affect individuals. She's explored how excessive 'quality-of-life complaints led to the over-policing of minorities, how badly constructed algorithms helped spread hate speech and warp our understanding of politics, and how changes in immigration enforcement drove immigrants into the arms of fraudulent lawyers. Previously, she's led teams and/or reported for BuzzFeed News, The Wall Street Journal, Al Jazeera America and NPR's Planet Money and told economic and political stories across the U.S. and throughout Asia. She's currently a data journalist in residence at the Craig Newmark CUNY Graduate School of Journalism and will be investigating inequality and gentrification.