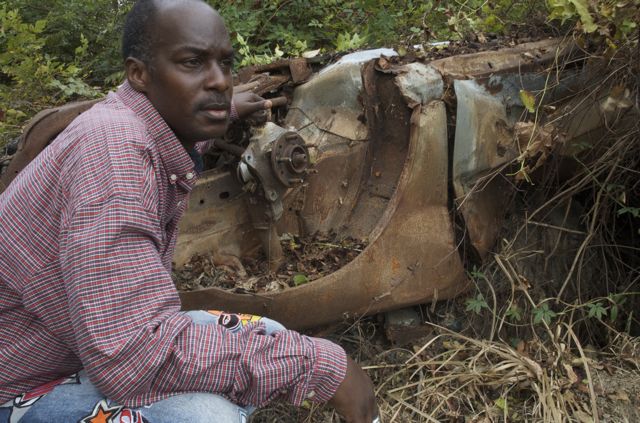 William Tanner beside the rusted hulk of his Chevy Malibu, which was incinerated along with Henry Glover's body. | Credit: CHANDRA McCORMICK AND KEITH CALHOUN

US attorney Jim Letten announced this afternoon that three New Orleans police officers and two former officers have been indicted in the shooting death of Henry Glover, an African-American resident of New Orleans who bled to death while in police custody in the days after Hurricane Katrina struck. (Read the indictment here [PDF].) A former officer, David Warren, was charged with Glover’s murder, according to the indictment. If convicted, he could face the death penalty, the New Orleans Times-Picayune reports.

Lt. Dwayne Scheuermann and officer Gregory McRae were charged for kicking and hitting two of the three Good Samaritans who tried to come to Glover’s aid, after they brought him to a temporary police base that had been set up at a local grade school. Glover’s body was later found inside a torched car that had belonged to William Tanner, one of his would-be rescuers. Scheuerman and McRae were charged with civil rights violations and destruction of evidence for beating the two men and for burning Tanner’s car with Glover’s remains inside.

Lt. Travis McCabe and a former lieutenant, Robert Italiano, were charged with obstructing a federal investigation for altering and concealing documents and covering up evidence related to Glover’s death. Italiano and McCabe also face perjury charges related to the federal grand jury investigation.

The story of Glover’s suspicious death was first reported in The Nation as part of a lengthy investigation by A.C. Thompson, in collaboration with The Investigative Fund, into vigilante attacks that took place in the wake of Hurricane Katrina. (ProPublica provided additional support.) When Thompson was reporting the story in 2007 and 2008, Tanner’s torched vehicle was still sitting, abandoned, on an earthen levee overlooking the Mississippi River. A forensic pathologist who examined Glover’s remains told Thompson, “my first reaction was that it was a homicide.” Amid the charred bones and ash were metal fragments, which might have been the remnants of a bullet, and the burned corpse struck him as potential evidence of a coverup. But after what appears to have been a cursory inquiry, Orleans Parish coroner Frank Minyard ruled the death “unclassified.” The Nation Institute had to sue Minyard to obtain Glover’s autopsy report. The NOPD had never even opened an investigation.

“If the NOPD ever bothers to learn who set fire to Glover,” Thompson wrote in that story, “the department’s first step should be questioning its own personnel: a trail of clues leads right back to the police force.”

Henry Glover was a father of four. “We want justice done,” his sister Patrice told Thompson in late 2008, tears in her eyes. “We wanna know who did it.”