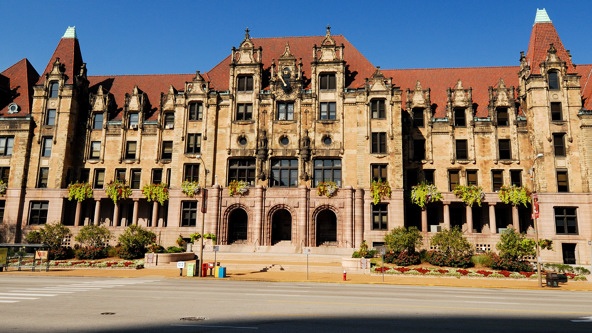 This story originally appeared in The St. Louis American. 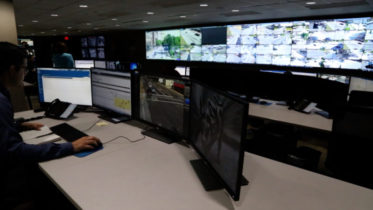 There’s a surveillance camera at corner of Arsenal Street and S. Grand Boulevard, and it appears to be pointed at MoKaBe’s Coffeehouse, where Black Lives Matter activists and other human rights protestors are known to meet, said Kendra Tatum, an organizer with Organization for Black Struggle.

“We are concerned that police are using surveillance cameras as an intimidation tactic on First Amendment rights,” testified Tatum at the Jan. 24 aldermanic Public Safety Committee meeting, speaking in support of Board Bill 219.

On January 24, the aldermanic committee debated the Surveillance Technology Bill that was introduced by Alderman Terry Kennedy (D-Ward 18) earlier this month. The bill would establish procedures to ensure more transparency and accountability among “any governmental units operating within the City of St. Louis” that use surveillance technology. Under the bill, these entities must submit a plan that outlines what surveillance equipment they will be using, the reasons why the equipment will be used in the neighborhoods it will be located, and what measures are being taken to avoid bias, among other things.

Currently, there are no public documents that provide this information.

The bill also requires annual reports that document equipment purchases, Sunshine Law requests, and breakdown of arrests and crime reduction, which are submitted to the aldermen and Public Safety director. The annual report is a public record that must be given within five days of a request.

“This bill fosters an environment of checks and balances and upholds the right of our residents to privacy,” said Jeffrey Mittman, executive director of the American Civil Liberties Union of Missouri, in his testimony to the committee. “Right now, St. Louis cannot claim to guard the privacy of its residents in a transparent, democratic way.”

The Real Time Crime Center (RTCC) – located in the headquarters of the St. Louis Metropolitan Police Department at 1915 Olive St. – allows police officers to monitor about 600 surveillance cameras citywide, as well as license plate reader cameras, sensors that can detect and locate gunfire, and three surveillance trailers that move throughout the city. Mittman said that when it opened in 2015, adequate policies to protect civil liberties were not put in place.

Mittman pointed to six-month joint investigationby the St. Louis American and Type Investigations released on January 23, which revealed that the city continues to operate under a privacy policy that the city itself acknowledged was a rough draft. A more comprehensive policy was drafted almost three years ago but never implemented, the investigation states.

“These safeguards are particularly important given our city’s persistent racial tensions,” Mittman said. “It cannot be ignored that surveillance technologies are often deployed in discriminatory ways.”

In St. Louis, African Americans are 18 times more likely to arrested for marijuana possession than white people, despite using marijuana at almost the same rate, Mittman said. Similarly, black drivers are 85 percent more likely to be pulled over in Missouri than white drivers.

Kennedy told the committee that the bill was a collaborative effort and came from various advocacy groups, including Privacy Watch STL, ACLU-MO, OBS and several others.

“And as you know when you come from a very grassroots basis, it takes a lot of discussion to find places of agreement,” said Kennedy, who is the chairman of the public safety committee. “Those groups have worked together to find those places, and now we’re interfacing with the city government to find what can actually work, as it relates to the creation of surveillance policies.”

Alderman Jack Coatar (D-Ward 7) said he was concerned that the bill would “create a cumbersome system.” Coatar, an attorney, said that according to the way the bill is written, it would pertain to building inspectors who use cameras to document dilapidated buildings.

“Any city department would have to go through this for just basic routine maintenance,” Coatar said.

He also wanted to see comparisons to other cities that have passed similar legislation, and the forms and reports that they are requiring. According to the ACLU, ten other cities –  along with a county and a large transportation district –  have passed similar bills. Coatar also wanted to see estimations for how much it would cost the public safety director’s office to take on the extra workload required by the bill.

Alderwoman Cara Spencer (D-Ward 20) asked to be a co-sponsor on the bill, but said she would also like to see the comparisons with other cities.

“We’ve installed cameras in the city that can capture people’s private, residential homes,” Spencer said, “and there are concerns about what we are capturing and who could have access to very personal and private data.”

Kennedy said that he is going to spend the weekend trying to get answers for the aldermen and revising the bill to address concerns. In order for the bill to pass this session, the public safety committee would have to vote on it next week. The aldermen go on break on February 1 and then will have only one more meeting on April 15 before the session ends.

Rebecca Rivas is a 2018-19 Ida B. Wells Fellow and a staff writer at the St. Louis American.