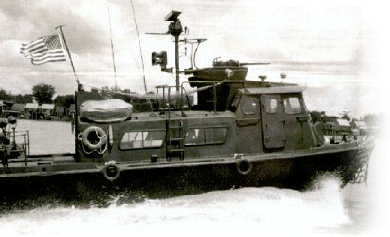 More than three years after John Kerry’s bitter defeat, at the dawn of what looks like a far more promising campaign cycle for the Democrats, the party is still haunted by the specter of the Swift Boat Veterans for Truth. Once upon a time, “Swift boat” denoted an obscure military vessel, but thanks to the activities of this group it has come to represent movement conservatism’s penchant for ruthlessly (and effectively) smearing any and all political opponents, from a sitting senator and war hero to an 11-year-old boy with a cranial fracture.

Research by The Nation into Federal Election Commission records of the group’s top twenty donors reveals that they’ve been remarkably active in this cycle, contributing and bundling nearly $200,000 to presidential candidates. This does not bode well. During the last presidential campaign, the wealthy backers of Swift Boat Veterans for Truth—now rebranded as Swift Vets and POWs for Truth—didn’t do their real dirty work until the general election, where as a tax-exempt 527 group they operated outside the restraints of direct campaign contributions. We may wish we were done with the Swift Boaters, but they aren’t done with us.

In 2004 the top twenty donors all gave (with one exception) at least $50,000 to the group. The top three—Houston home builder Bob Perry, Texas oilman T. Boone Pickens and billionaire drugstore impresario and investor Harold Simmons—gave a combined $9.5 million ($4.45 million, $3 million and $2 million, respectively). Calculating the influence of these and the slightly less wealthy Swift Boat donors during this cycle is a touch more complicated than simply adding up their contributions. Each one exerts far more influence as a bundler, given the federal restrictions on individual giving, which limit donors to a maximum of $4,600 per cycle. So The Nation looked not only at the contributions of the donors themselves but also at those of their family members and employees. It’s an imperfect method, since some employees are clearly contributing of their own volition (such as one employee of a Simmons company who gave money to Hillary Clinton), but it gives a rough estimate of who’s backing whom and to what extent.

The most notable recipient of Swift Boat largesse is John McCain, erstwhile front-runner and Stand Up Guy. When the Swift Boat ads were first unleashed, McCain was alone among his Republican colleagues to condemn them. A fellow Vietnam veteran, a good friend of Kerry’s and a former target of smears about his own service, McCain called the ads “dishonest and dishonorable,” a “cheap stunt,” and he urged Bush to condemn them. But in pursuit of the GOP nomination, McCain ditched the mantle of maverick for that of hack, and his once-floundering, possibly rejuvenated campaign has been aided along the way by $61,650 from Swift Boat donors and their associates. “There is such a thing as dirty money,” said Senator Kerry in a statement, after The Nation informed him of McCain’s FEC records. “I’m surprised that the John McCain I knew who was smeared in 2000 and thought so-called Swift Boating was wrong in 2004 would feel comfortable taking their money after seeing the way it was used to hurt the veterans I know he loves.” (McCain’s office did not return calls for comment.)

McCain’s Swift Boat bounty is exceeded only by that of Mitt Romney, who has raked in $70,550. Romney’s success with Swift Boat donors is significant because he has surpassed even McCain in his demonstrated willingness to do or say anything in pursuit of the presidency and because he has emerged as the GOP establishment’s favored candidate. Last year, when McCain held that position, the Arizona senator received significant backing from Swift Boat donors. But many have subsequently switched their allegiance. Pickens, who donated to McCain in June 2006, is now an enthusiastic Giuliani donor and fundraiser (Giuliani ranks third in Swift Boat funding, with $47,950). Perry, who also recorded several donations to McCain’s PAC in 2005 and 2006, is now a major donor and fundraiser for Romney. If the list of top Swift Boat donors is expanded to fifty, Romney’s fundraising edge is even more pronounced. (Neither Romney nor Giuliani’s campaign returned calls for comment.)

Also noticeable among the recipients of Swift Boat largesse is one who received only a single donation: Mike Huckabee. Despite meager fundraising and little national name recognition, the former Arkansas governor has experienced a bubble-like expansion of support and media attention, taking the lead in Iowa and approaching a steady lead in national polls. But the lack of Swift Boat contributions lends credence to the claim that Huckabee is viewed warily by the money men who call the shots in the modern GOP. Despite proposing a radically regressive tax change and taking Grover Norquist’s antitax pledge, he’s been attacked savagely by the Club for Growth and eviscerated by columnist George Will for “comprehensive apostasy against core Republican beliefs,” among them “free trade, low taxes, the essential legitimacy of America’s corporate entities and the market system allocating wealth and opportunity.”

This all supports the notion that the people behind the Swift Boat operation are chiefly concerned with the continued upward redistribution of wealth that is, more or less, the contemporary GOP’s raison d’être. In 2006 Perry ponied up $5 million to start the Economic Freedom Fund, a 527 group devoted to attacking Democratic incumbents, and landed a large donation from prominent Swift Boat donor Carl Lindner. All of which is to say that the Swift Boaters aren’t some kind of side show, a coterie of vicious mudslingers operating at the edges of respectability. They are the show. They are modern conservatism’s core funders and beneficiaries. With conservatives staring straight into the abyss, their activities in this election cycle could very well make the Swift Boat smears look tame by comparison.

This report was produced with support of The Nation Institute Investigative Fund, now known as Type Investigations. Additional research was provided by Nicholas Jahr.

Chris Hayes hosts “All In with Chris Hayes” on MSNBC and is an editor-at-large of The Nation.