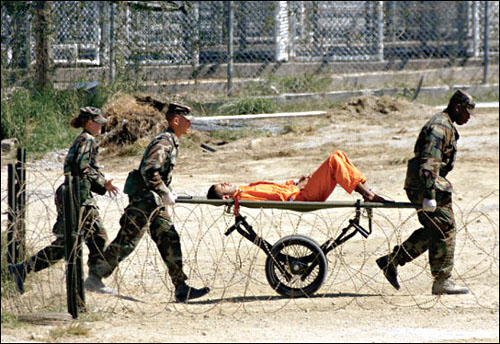 Secret evidence. Denial of habeas corpus. Evidence obtained by waterboarding. Indefinite detention. The litany of complaints about the treatment of prisoners at Guantánamo Bay is long, disturbing and by now familiar. Nonetheless, a new wave of shock and criticism greeted the Pentagon's announcement on February 11 that it was charging six Guantánamo detainees, including alleged 9/11 mastermind Khalid Shaikh Mohammed, with war crimes — and seeking the death penalty for all of them.

Now, as the murky, quasi-legal staging of the Bush Administration's military commissions unfolds, a key official has told The Nation that the trials have been rigged from the start. According to Col. Morris Davis, former chief prosecutor for Guantánamo's military commissions, the process has been manipulated by Administration appointees to foreclose the possibility of acquittal.

Colonel Davis's criticism of the commissions has been escalating since he resigned in October, telling the Washington Post that he had been pressured by politically appointed senior Defense officials to pursue cases deemed “sexy” and of “high interest” (such as the 9/11 cases now being pursued) in the run-up to the 2008 elections. Davis, once a staunch defender of the commissions process, elaborated on his reasons in a December 10, 2007, Los Angeles Times op-ed. “I concluded that full, fair and open trials were not possible under the current system,” he wrote. “I felt that the system had become deeply politicized and that I could no longer do my job effectively.”

Then, in an interview with The Nation in February after the six Guantánamo detainees were charged, Davis offered the most damning evidence of the military commissions' bias — a revelation that speaks to fundamental flaws in the Bush Administration's conduct of statecraft: its contempt for the rule of law and its pursuit of political objectives above all else.

When asked if he thought the men at Guantánamo could receive a fair trial, Davis provided the following account of an August 2005 meeting he had with Pentagon general counsel William Haynes — the man who now oversees the tribunal process for the Defense Department.

“[Haynes] said these trials will be the Nuremberg of our time,” recalled Davis, referring to the Nazi tribunals in 1945, considered the model of procedural rights in the prosecution of war crimes. In response, Davis said he noted that at Nuremberg there had been some acquittals, which had lent great credibility to the proceedings.

“I said to him that if we come up short and there are some acquittals in our cases, it will at least validate the process,” Davis continued. “At which point, [Haynes's] eyes got wide and he said, 'Wait a minute, we can't have acquittals. If we've been holding these guys for so long, how can we explain letting them get off? We can't have acquittals. We've got to have convictions.'”

Davis submitted his resignation on October 4, 2007, just hours after he was informed that Haynes had been put above him in the commissions' chain of command. “Everyone has opinions,” Davis says. “But when he was put above me, his opinions became orders.”

Reached for comment, Defense Department spokesperson Cynthia Smith said, “The Department of Defense disputes the assertions made by Colonel Davis in this statement regarding acquittals.”

“The fact that [Haynes] said there can be no acquittals will stain the entire [tribunal] process,” says Scott Horton, who teaches law at Columbia University Law School and has written extensively about Haynes's conflicts with the Judge Advocate General's (JAG) corps, the judicial arm of the armed forces, which is charged with implementing the military commissions. According to Horton, Haynes tried to cut the JAG corps out of internal debates over the detention and prosecution of detainees, knowing it was critical of the Administration's views. In private memos and in public Senate testimony, high-ranking officers of the corps have repeatedly expressed concerns about the Administration's justification of “extreme interrogation techniques.”

“The JAG corps consists of a group of rigorous professionals, but Haynes never trusted them to do their job,” says Horton. “His clashes have always had the same subtext — they want to be independent; he wants them to do political dirty work.”

Haynes, a political appointee and chief legal adviser to Defense secretaries Donald Rumsfeld and Robert Gates, was nominated in 2006 by the Bush Administration for a lifetime seat as a judge in the Court of Appeals for the Fourth Circuit. But his nomination never got out of committee, primarily because of the opposition of Republican Senator (and former military lawyer) Lindsey Graham and other members alarmed over Haynes's role in writing, or supervising the writing of, Pentagon memos advocating the use of harsh interrogation techniques the Geneva Conventions classify as torture.

Currently, in his capacity as Pentagon general counsel, Haynes oversees both the prosecution and the defense for the Guantánamo commissions.

“You would think a person in that position wouldn't be favoring one side,” says Colonel Davis.

Told of Davis's story about Haynes, Clive Stafford Smith, a defense attorney who has represented more than seventy Guantánamo clients, said, “Hearing it makes me think I'm back in Mississippi representing a black man in front of an all-white jury.”

He adds, “It confirms what people close to the system have always said,” noting that when three prosecutors — Maj. Robert Preston, Capt. John Carr and Capt. Carrie Wolf — requested to be transferred out of the Office of Military Commissions in 2004, they said they'd been told the process was rigged. In an e-mail to his supervisors, Preston had said that there was thin evidence against the accused. “But they were told by the chief prosecutor at the time that they didn't need evidence to get convictions,” says Stafford Smith.

At the time, the military wrote it off as “miscommunication” and “personality conflicts.” And then there were changes in personnel. “They told us that the system had been cleaned up...but I guess the more things change, the more they stay the same,” says Stafford Smith.

The terrible truth is that even if acquittals were possible, the government has declared that it can continue to detain anyone deemed an “enemy combatant” for the duration of hostilities — no matter the outcome of a trial. Most of the 275 men held at Guantánamo are classified as “enemy combatants,” and the hostilities in the “war on terror” could be never-ending.

Says ACLU staff attorney Ben Wizner, “The trial doesn't make a difference. They can hold you there forever until they decide to let you out.” The one person to be released from Guantánamo through the judicial process, Australian David Hicks, pleaded guilty. As Wizner wrote in the Los Angeles Times in April 2007, “In an ordinary justice system, the accused must be acquitted to be released. In Guantánamo, the accused must plead guilty to be released.”

Still, the trials serve a purpose for the government by providing the semblance of a legitimate judicial process. According to defense attorneys involved — and many of the former prosecutors, like Davis — the process is political, not legal.

“If someone was acquitted, then it would suggest we did the wrong thing in the first place. That can't happen,” says Horton sardonically. “When the government decides to clear someone, it calls the person 'no longer an enemy combatant' instead of just saying they made a mistake.”

He adds, “For people like Haynes, justice is meant to serve the party.”

Research support provided by the Investigative Fund of The Nation Institute.

Ross Tuttle is a documentary producer/director and journalist originally from Marblehead, MA.