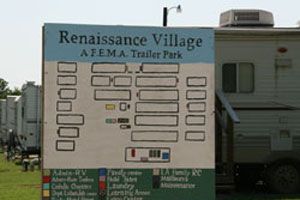 If you drive around Louisiana these days and scan the AM/FM offerings, you’ll hear one recurring radio spot: In the wake of the latest tests showing high levels of formaldehyde emissions in federally issued trailers, FEMA wants to talk to all remaining post-Katrina evacuee trailer residents about how to get their living quarters tested for formaldehyde. What you won’t find as easily on the dial, at least not yet, is Texas attorney Anthony Buzbee’s allegation that FEMA knew about the formaldehyde problem even before the mass distribution of emergency homes began.

Buzbee is one of several lawyers representing over 10,000 trailer residents in a class action lawsuit against FEMA and more than 60 trailer manufacturers. He told Mother Jones that newly obtained Freedom of Information Act request (FOIA) documents show the Occupational and Safety and Health Administration (OSHA) had been testing formaldehyde exposure around the trailers as early as October 2005—almost a year before tests were made public. Indeed, when OSHA placed monitors on employees at various trailer distribution sites across Mississippi that fall, it discovered alarmingly high levels of formaldehyde emanating from the very same trailers the FEMA workers were distributing to evacuees. OSHA is required to inform employers, in this case FEMA, of excessive levels of formaldehyde; the 2005 test results revealed levels up to 6.7 times higher than what is deemed safe in a workplace. Says Buzbee, “The documents clearly show that FEMA was aware of the formaldehyde problem before it even distributed the trailers to the Katrina victims.”

Disturbed by the brazenness of FEMA in beginning mass distribution of trailers it knew were toxic, Buzbee is pushing for a congressional investigation against the agency. While FEMA has not returned calls for comment on whether they had been informed of the OSHA results, Buzbee says it’s standard policy for OSHA to notify employers immediately if they detect levels of formaldehyde that are higher than the permissible limits, and their procedure gives these employers 60 days to remedy the situation.” Why, then, “would OSHA have broken this protocol and not told FEMA? After all, it was FEMA employees who were being directly affected by the formaldehyde exposure.”

Formaldehyde is a somewhat complex gas, and different government agencies consider different levels safe. OSHA says that for workers, whose exposure would be periodic and total a maximum of eight hours per day, the allowable limit of formaldehyde is 0.75 parts per million. However, the Department of Health and Safety, through its Agency for Toxic Substances and Disease Registry, has a much lower limit of 0.008 parts per million, because its measurement is based on chronic exposure. Accordingly, while formaldehyde levels exceeded the OSHA limit in 12 cases out of the approximately 200 tests the agency conducted in Mississippi between 2005 and 2006, the ATSDR limit, according to Buzbee and borne out by FOIA documents, “was exceeded by many many times in every single case.”

While the levels of unsafe formaldehyde exposure appear to differ widely, Buzbee asserts that the trailer residents have been exposed to far beyond what is safe by anyone’s standards. His assertion holds water with the EPA, which considers any exposure over 0.1ppm—only slightly higher than ATSDR’s—likely to cause adverse health effects. Says Michael Walsh, a professor at the NYU School of Medicine’s Department of Environmental Medicine, “The bottom line is that if [formaldehyde] exposure exceeds the safety level, those who were exposed should be concerned.”

And what are the symptoms of such exposure? Per the ATSDR: “Low-dose acute exposure can result in headache, rhinitis, and dyspnea; higher doses may cause severe mucous membrane irritation, burning, and lacrimation, and lower respiratory effects such as bronchitis, pulmonary edema, or pneumonia. Sensitive individuals may experience asthma and dermatitis, even at very low doses. Formaldehyde vapors are slightly heavier than air and can result in asphyxiation in poorly ventilated, enclosed, or low-lying areas.”

Poor ventilation is perhaps the one characteristic that defines all the travel trailers that Katrina evacuees are occupying. During the hot months, it is impossible to leave the trailer door open for even a second, as precious cool air from the air conditioner escapes. Not only would living in a trailer constitute a constant or chronic exposure because of the number of hours per day that people are exposed, but it would likely also constitute a concentrated exposure due to the poor ventilation of these homes.

Buzbee and the residents who spoke to Mother Jones all believe those late 2005 tests should have raised an immediate alarm—yet no one alerted residents to the potential danger until an entire year later. This spring, residents had a chance to talk to FEMA officials about their concerns, at one of several government-sponsored “Public Availability Sessions” across the state.

I went to one such talk earlier this year, held in Louisiana’s largest FEMA trailer park, built in the aftermath of Katrina. The park, called Renaissance Village, sits in Baker, Louisiana, just northeast of Baton Rouge. The talk promised residents free food, bottled water, and a chance to be among the first evacuees to have their questions answered by experts from both FEMA and the CDC soon after CDC test results were announced. Yet if residents were upset or distressed when they arrived at this first meeting in Baker, most left the meeting downright angry, like one Renaissance Village trailer resident, Lena, who did not want to give her last name. “It’s all a string-along,” she said that day. “It’s a bunch of nothingness. Just words to keep you going, and thinking that help is coming, making you think that the government cares.”

At the Renaissance Village meeting, residents and people like attorney Buzbee had a barrage of burning questions for the government officials. How many trailers in Renaissance Village had been tested? Michael McGeehin, representing the CDC, was unable to provide an exact count. Residents protested that they did not know a single person who had had the tests done. McGeehin responded that the trailers were chosen in a scientific manner across the state. When residents then berated him chorus-style, “that is not good enough; it is not good enough,” McGeehin bluntly responded, “YES it is. YES it is.”

While McGeehin was the one before the gathered crowd facing repeated questions about the test results, he was quick to deflect them to FEMA every time residents asked why their trailer wasn’t tested in his study. He repeatedly pointed to a row of seated officials at computers who worked for FEMA, saying FEMA has said “that anyone who wants their trailer tested can have their trailer tested.”

Lena, who has lived with her two sons in Renaissance Village since October 2005, did as instructed and took a seat before a FEMA official, asking if her family’s trailer could be tested. The response from Jennifer, who later identified herself as a FEMA “supervisor” but refused to give her last name, was mechanical: “That’s a CDC question, Ma’am.” When I intervened over Lena’s shoulder, my press pass flashing and my microphone pointed at the FEMA official, and told her that CDC is directing residents to her FEMA staff because it is FEMA who will now be doing follow up testing, she glanced quickly at me, then at Lena, and then reversed her position, saying, “We can do that.” However, when Lena asked how long the process would take, Jennifer responded, “I don’t have any information on that.”

Over the next 20 minutes, I watched while Lena was bounced between officials who treated her with alternating condescension—as when Lena expressed a deep fear of not being able to “make it” given the exorbitant prices of rentals in New Orleans, and one responded, “If you think you’re going to fail, what’s going to happen? Think positive, you know, I’ve always told my kids…”—and contempt, as when Lena asked the supervisor to help her because she felt she was getting nowhere and was abruptly told, “That’s what we have case workers for.”

Among the various supervisors, FEMA caseworkers, and FEMA press officials at the Renaissance Village meeting, no one could definitively answer whether or not FEMA was going to test more trailers for formaldehyde. That day, it seemed the best FEMA was offering residents concerned about their health was a motel room. And while a new space may seem like a good first step, many residents fear it’s a quick and simple path to homelessness. Fear of losing the only stable homes people have, even if they are potentially toxic, means that many residents won’t even start a case with FEMA. Stories abound among residents of neighbors and friends at Renaissance Village who have been moved first out of their trailer, and then, one month later, out of a FEMA-funded motel room, cast starkly on their own.

To Lena, the situation is simple. “I believe that people who have case workers are scared. They are being made to believe that they have a place, but they really are not stable and they are not going to have stability unless something that is concrete, that’s well grounded or well rooted happens. For me, I’m afraid. How do I step out when there are so many lies? The government [is] not giving the employees the answers for us, because I believe there is no answer for us. They just hope that we probably all drop dead like flies.”

Deepa Fernandes is a journalist who has covered guerrilla insurgencies, natural disasters and political coups in countries from Haiti to East Timor.