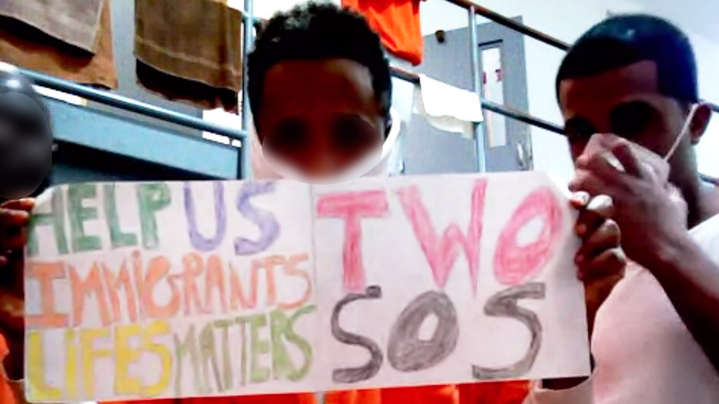 UPDATE 4/22/20: At least two detainees at the Irwin County Detention Center, an immigration detention facility in Georgia at the center of this story, are entering their 9th day of a hunger strike. They are protesting their continued detention and what they say is the ongoing failure of the facility to take effective measures to protect detainees from COVID-19. The two men say they’re demanding to speak with the head of the Atlanta ICE field office. Three other detainees in the same facility are also on a hunger strike, according to ICE spokesperson Lindsay Williams.

Detainees at the privately run facility staged a protest, which formally launched on the 13th, refusing to accept food from the kitchen or attend work shifts. Within several days, that protest had largely subsided. Several detainees say they ended their protests after the facility began to sever their access to a video call system that provides a line out, to their families and to reporters. But a small group of detained men continued to strike, refusing all food and water. According to ICE policy, the agency considers detainees to be on a formal hunger strike if they’ve refused to eat for three days. In addition to the five detainees in Irwin County, a detained person in an ICE facility in Folkston, Georgia is also on hunger strike, according to Williams.

In the face of the coronavirus pandemic, undocumented immigrants at a Georgia detention center are staging a strike, refusing to go to work in the kitchen, laundry room or commissary or accept meals from the facility. The detainees are demanding that Immigration and Customs Enforcement officials release vulnerable people and that the private company that runs the facility take more measures to protect people in their custody from infection.

The immigrants begged for help over the weekend and on Monday, posing with signs and handwritten letters, and reading petitions through a video communication service.

“HELP US IMMIGRANTS LIFES MATTER,” read one of the signs that a group of men, who wore masks fashioned out of disposable plastic meal containers and strips of fabric, held in an image shared with HuffPost and Type Investigations. “WE ARE NOT SAFE HERE AFRAID OF” COVID-19, another read.

In a video provided by one of the relatives of detainees, women held signs reading “our children need us,” and “please help us.”

Detainees are increasingly alarmed about conditions inside the Irwin County Detention Center, after news last Thursday that at least one detained person and one staff member had tested positive for COVID-19, the disease caused by the coronavirus. The protest at the center is the latest in a series of similar actions by ICE detainees around the country, who are demanding the release of vulnerable people and additional protections from COVID-19 in facilities where social distancing is impossible and the virus is spreading. 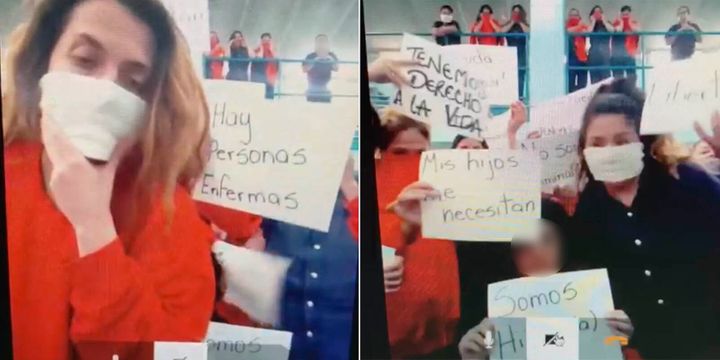 It’s not clear how many detainees are participating in the work stoppage and refusing to accept meals. The ICE spokesperson for the region, Lindsay Williams, denied any knowledge of a protest, even after detainees said they’d presented an ICE officer with a demand letter.

In interviews, detainees confirmed that the protest has spread to multiple dormitories, and now includes a significant proportion of the detained population.  In at least two dorms, detainees now report that their video visitation access has been cut off.

“I am scared, and I am tired,” said a detainee in his late 30s who is diabetic and said he fears he would be at significant risk if infected with the coronavirus. “We are not safe here and that is why we are striking.”

Detained men in at least one of the units say they talked to an ICE officer and presented him with a typed demand letter addressed to the Department of Homeland Security and the facility’s warden. A detainee read the letter to HuffPost and Type Investigations over the phone.

In it, the immigrants demand the immediate release of those who are at high risk of severe complications should they contract the coronavirus, along with women with children outside the facility and people who are not set for removal within the next 10 days.

They also ask that the facility take multiple protective measures: giving out hand sanitizer, providing protective masks for each detainee every 24 hours, and testing all detainees and staff. They also demand that ICE reduce the number of people held in each dorm to no more than 10 people.

“Now it is 20-30 detainees per dorm, which is unlawful and makes social distance impossible in accordance with the guidelines from the White House and the World Health Organizations,” the petition reads. (Read the full petition below.) 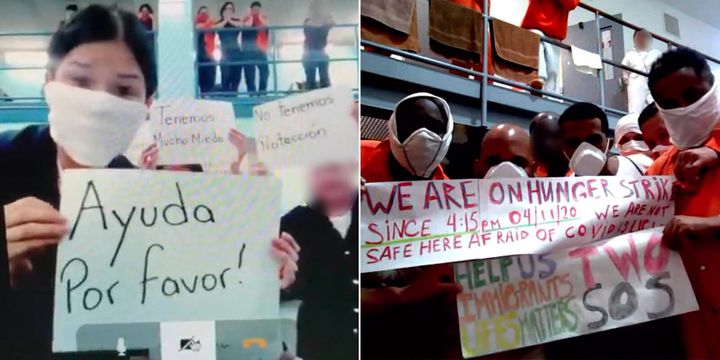 Detainees have said for weeks that the facility is not equipped to prevent the spread of COVID-19, as HuffPost and Type Investigations reported last week. Two medical doctors, both women from Cuba who ICE is detaining at the center after they claimed asylum at the U.S.-Mexico border, said that in their professional opinions, the facility is ill-equipped to combat the spread of the virus.

“Some officers enter without protection — without masks and without gloves,” said one of Cubans, who asked not to be named for fear of retribution. “The management comes in coughing. The conditions where we sleep are terrible …and when we bathe we are exposed to getting sick.”

ICE has said on its website that at its detention facilities across the U.S., 77 detainees and 19 ICE employees have tested positive for the coronavirus. But that list appears incomplete.

The transport officer, who the facility said had not been in direct contact with detainees, was not yet included on ICE’s list at the time of its publication, and the detainee was included only after the warden’s declaration. The declaration was filed in court on Thursday afternoon, in response to a habeas petition by the Southern Poverty Law Center requesting the release of several detained people at the Irwin County facility and in the Stewart Detention Center. A judge denied the petition.

“The fact that this information came to light only because of our lawsuit, it raises questions about how much we can trust public information from ICE about what is happening,” said Lorilei Williams, a Southern Poverty Law Center attorney. “Our clients are in significant risk.”

Williams, the ICE spokesman, said the delay in making public the cases may have been a result of system lags between learning of cases and updating the website. It remains unclear how much time passed between the positive tests and the public disclosure.

Williams also said that in privately run detention centers like the Irwin County one, ICE relies on the companies to learn about positive cases.

Lasalle Corrections, the private company that operates the Georgia facility, has not replied to repeated requests for comment, and the warden said that he was not permitted to speak to the press.

Detainees are stuck waiting for more help and more information. A man in his 60s ― who said that in recent weeks he has felt weak and unwell, which he attributes to the general lack of access to healthy food and exercise in the facility ― said on a call that ICE should consider releasing detainees and allowing them to continue with their immigration cases while they remain outside with their families.

“I do not want to die,” said the man, who asked not to be named.

Read the full petition, as read by phone by a detained immigrant:

From: Detainees at Irwin County prison

To: DHS and Warden of Irwin County prison, Mr. Paulk

Immediate release of all:

– High risk group of detainees in regards to coronavirus (who have health conditions like asthma, hypertension, elderly, disabled, etc.) because of unsafe health conditions at Irwin County prison and extremely high health risk for non-compliance with inspection disease control procedures.

– Detainees who cannot be deported in the next 10 days, including those who are not under deportation orders

– Females who have kids outside Irwin County prison.

(This release can be done with a supervision order, bail bond, parole or GPS tracking device.)

2) In the meantime we request:

– Protective masks for every detainees every 24 hours

– Hand sanitizer in every dorm

– Proper lab tests for coronavirus for everyone detained

– Reduction detainee density for dorms to not exceed more than 10 detainees per dorm. (Now it is 20-30 detainees per dorm, which is unlawful and makes social distance impossible in accordance with the guidelines from the White House and the World Health Organizations.)

– No new detainees in the forms coming from other facilities and/or the streets without proper lab testing for Coronavirus.