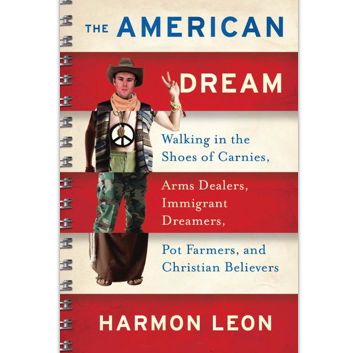 Journalist and social chameleon Harmon Leon is known for infiltrating and exposing the weird and wonderful subcultures of America. In The American Dream: Walking in the Shoes of Carnies, Arms Dealers, Immigrant Dreamers, Pot Farmers, and Christian Believers, Leon once again hits the road to uncover the humorous and contradictory ways in which people from all walks of life define themselves in relation to their country.

Leon’s pursuit of the American dream takes him from the pot fields of Northern California to reality T.V. shows in Culver City; from swinging parties in the suburbs to Christian protests against fornicators in Kansas; from a carnival in rural Indiana to a military trade show in Florida; and into Mexico and a tourist attraction that allows people to simulate illegally crossing the border.

Whether he’s trying to topple the Hollywood star-making machine or buying a black market Green Card, Leon offers a funny, satirical and ultimately poignant take on what it means to live in twenty-first century America.

Research support for the arms dealer chapter of this book was provided by the Investigative Fund at The Nation Institute.

Harmon Leon is an award-winning journalist and filmmaker.