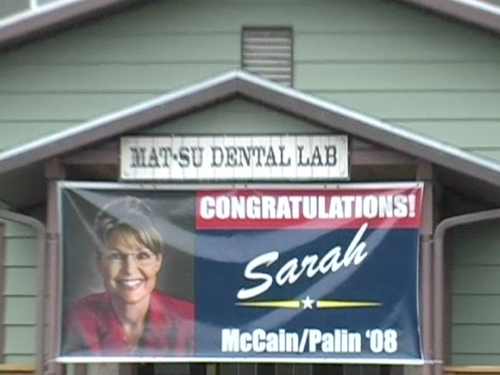 An image from a video report from the church where Palin was baptized. | Credit: MAX BLUMENTHAL

This is the first original, on-the-ground video report from inside the church where Gov. Sarah Palin was baptized and spent over two decades as a member, the Wasilla Assembly of God. The video features the only known footage of the man who publicly anointed Palin for higher office, the Kenyan witch hunter Bishop Thomas Muthee, during his return to Wasilla this September. Though filming was not allowed, I managed to capture through hidden cameras Muthee's violent invocations against “The Enemy” and the “python spirits.” I also spoke with Rev. Howard Bess, whose book, ”Pastor, I Am Gay,“ was removed from Wasilla's public library after Palin personally pressured the librarian. Those who embrace spiritual warfare see Palin as nothing less than the Anointed One, a modern day Queen Esther, as one anti-abortion protester told me on a rainy night in Anchorage. See for yourself.