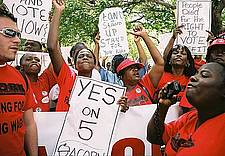 Despite Obama's ultimate victory, incidents of voter suppression mounted daily through Election Day — from deceptive fliers and robo-calls to registrars thwarting eligible voters from casting their ballots — so the GOP's overheated attacks about the specter of voter fraud and the menace of the community group ACORN bore fruit. As a top organizer for Arizona ACORN, Monica Sandschafer contended, “Senator McCain has been running a dirty campaign filled with false accusations about my organization, ACORN, and using these threats to try to suppress the votes of minority voters.”

Now, voting rights attorneys, including the Advancement Project's Judith Browne-Dianiss, worry about the impact at the state level on voting rights and non-profit registration drives because of the spate of fear-mongering targeting ACORN. “We're going to see a slew of retrogressive legislation coming out in the wake of all the ACORN stuff,” she predicts.

Ugly attacks against ACORN were a central element in the vote-limiting strategy that was a key to McCain's last-resort hopes for a Republican victory. Indeed, a little over two weeks ago, Wade Henderson, the president of the Leadership Council of Civil Rights, worked with other civil and voting rights groups to ask John McCain to tone down the rhetoric that could incite violence and increase vote suppression. On Monday, he joined with other Election Protection leaders to warn: “When you have hotly contested elections with a significant increase in voter registration, it creates a perfect storm of voter manipulation and vote suppression in swing states.”

He declared, “Some of these tactics would make an anti-democrat like Robert Mugabe of Zimbabwe proud.”

The smears and attacks against ACORN helped make it all possible, with ACORN workers becoming collateral damage in the PR and legal blitz against mythical voter fraud.

Take what happened to Barbara Clark, chief organizer in Columbus, Ohio for the community organizing group ACORN, who at first simply deleted the bigoted emails that referred to “niggers” who “cheated” for Obama.

When she checked her voice mail on October 9 and heard a caller masquerading as an IRS agent claiming he was going to visit ACORN's downtown office to “investigate your black ass,” she began to worry.

“The scary part was: how'd this person get my cell phone number?” Clark recalled in a recent interview.

When the attacks on ACORN from conservative blogs and Fox News culminated in John McCain's accusation in the October 15 presidential debate that the community organizing group was “destroying the fabric of democracy” Clark became more frightened.

So when a motorcyclist followed her car on her drive home the next day, she waited until he rounded a corner until she dared to sprint to the door. She says she could still hear the motorcycle idling nearby, while she prayed inside. Ultimately, she called a friend to pick her up and take her to the friend's house.

That was followed on Oct. 21 by an email with a death threat aimed at all ACORN staffers: “Your days are numberedfuck off and die.” The next day Clark filed a police report.

“It kind of disturbs me, and what flashes back are the churches burning, students being killed, civil rights,” Clark said. “A lot of people are influenced by what they see on TV, and when they hear these negative ads, it makes some people feel: I can't stand ACORN and I'm going to get them.”

The right-wing rage against ACORN tends to obscure the consensus of most voting rights experts that impersonation of voters in the polling place is exceedingly rare. The allegations against the group not only aim to suppress voting but are part of what The Washington Independent's Daphne Eviatar has described as “an effort to lay the groundwork for challenging the outcome of Election Day and the legitimacy of the next president.”

ACORN leaders say the danger is more immediate and personal for them. At least 100 organizers in nearly 90 offices have received up to 30 hate messages each, according to spokesman Brian Brian Kettenring. In the past month, the group's offices in Boston and Seattle have been vandalized, according to news reports.

ACORN has asked the FBI, Justice Department and local law enforcement agencies to investigate. ACORN legal advisor Estelle Rogers said, “We have received very serious treatment at the Department of Justice, but we've gotten no response from the FBI.”

ACORN has also filed a lawsuit alleging Republican intimidation and harassment of Hispanic voters in New Mexico. Brian Kettering, a spokesman, says ACORN is responding to “an escalating campaign to suppress voters.”

The Republican National Counsel's chief counsel, Sean Cairncross, shot back: “For ACORN - a quasi-criminal organization - to infiltrate this system with false accusations and illegal activity is an abomination that attempts to subvert the very foundation on which America stands.”

ACORN and its allies reply that the GOP attacks deliberately overlook ACORN's role in flagging the small fraction (under 2 percent, they say) of fraudulent voter registration forms and in firing workers in the most high-visibility cases this year.

“We're very frustrated,” said Brian Mellor, the attorney for Project Vote, a nonprofit organization promoting low-income and minority voter participation and which helps manage ACORN's registration drives. “We pointed out the problem cards.” Citing local election officials in Indiana, Nevada and other states, he notes, “They're blaming us for stuff that they could have caught if they just worked with us.”

Consider what happened in Lake County, Indiana, a majority white county near Chicago anchored by a heavily African-American city, Gary. In recent interviews supported by documents on the ACORN web site, staffers say they met with the county election board, when they launched a registration drive in July, to describe their quality control system which includes seeking to call every voter on all registration cards and firing scammers on their payroll. They also attach cover sheets to registration cards where they have found problems.

“They didn't accept the cover sheets, and we saw them mix in the good cards with the bad ones,” said Jeff Ordower, ACORN's Midwest head organizer,.

Ordower conceded that ACORN's office in Gary was the group's “worst” such operation in the county with its nearly 2,000 problem cards out of 8,000 gathered. He says the office was shut down for nearly a month in late August while vetting continued elsewhere.

The result ultimately was a firestorm of accusations against ACORN in October for turning in bogus cards that Ordower says were flagged by the group itself two months earlier. These included the most notorious cards denounced by the GOP: registration forms with the “Jimmy Johns” sandwich shop listed as a registrant, and a dead woman's name.

“They weren't very diligent; it was the people they hired,” she said. “And you just don't dump 2,100 cards at the end of registration,” because it slows down verification.

Ordower counters that the local board simply delayed processing any ACORN registration cards for weeks, thwarting the predominantly African-American applicants' opportunities to vote early. That could potentially lead to longer lines on Election Day for those voters. In a virtually dead-even race in a swing state, a few thousand black voters discouraged from voting could make a difference.

To top it all off, a little more than week after his department declared that ACORN was required to turn in all forms, the Republican Secretary of State asked prosecutors to charge ACORN for knowingly submitting false forms.

“It's a crazy Catch-22,” said Ordower, noting that the local election board had asked ACORN to turn in all forms, too. The Obama campaign also accused Rokita of promoting a “fear campaign” designed to aid McCain, a charge the Indiana official denies.

Rokita, incidentally, is the state's leading champion of the state's photo ID law which was upheld by the Supreme Court earlier this year. He champions the law despite his own admission that the state has never prosecuted anyone for in-person voter fraud.

“For six months we have been handing the Board of Elections smoking gun after smoking gun, saying, 'We want you to prosecute these people.' They sat on them, then staged this raid where they acted as if they didn't know us,” said Matt Henderson, ACORN's Southwest organizer. The group provided as an example a cover sheet, dated July 22, which described five attached voter cards as “problematic.”

A spokesman for Ross Miller, Bob Walsh, insisted the decision to seize records and computers was based on law-enforcement principles, not politics.

“We were investigating criminal activity, and we had information that they were not turning stuff in,” he says. And he doesn't worry that the incident was exploited by Republicans to potentially deter voters.

“I'll defend it as law enforcement, pure and simple,” he said.

The organization says it pursues quality control efforts regardless of the attacks. All told, ACORN fired 829 workers in its nationwide effort, according to ACORN officials. That's about 9 percent of the 10,000 temporary canvassers, hired at $8 a hour, to help register or re-register voters.

The organization spotted about 15,000 phony cards, another spokesman estimates, and roughly a third of the 1.3 million cards they gathered couldn't be used, mostly because they were duplicates. That may seem high, but it's a track record equivalent to other paid voter registration drives, according to John Hickey, the former director of Missouri's Progressive Vote Coalition and other experts.

At least one Republican is satisfied with ACORN's vetting process. Scott Leindecker, a election co-director in St. Louis, was harshly critical of ACORN's handling of bogus registration cards in 2006. This year, Leindecker said, “Things went well, and I didn't see anything to raise a red flag.”

Real voters who tried to cast real ballots on Election Day haven't been so lucky, thanks in part to the smears against ACORN.