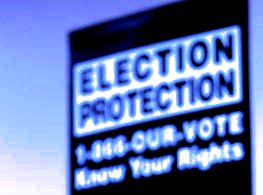 Barack Obama won, there were only isolated election glitches and all’s right with the world.

That, at least, is one emerging mainstream media view about Election Day. As The Associated Press declared, “After all that fuss, the system worked. There was no meltdown, no flurry of lawsuits, no statewide demands for a presidential recount.”

But just because there was no repeat of a nightmare scenario like the 2000 Florida recount doesn’t mean there weren’t systemic problems in the country’s diverse electoral systems.

In Minnesota, problem-plagued ballot scanners threaten an accurate recount in the contest between Sen. Norm Coleman and Democratic challenger Al Franken, according to Minnesota Independent.

In Virginia, where Obama won easily, the Election Protection coalition’s war room received reports from across the state about long lines, broken machines and thwarted access for elderly and disabled voters, despite the governor’s claim that Virginia was prepared.

In Richmond, Judith Browne-Dias, co-director of the nonprofit voting rights group Advancement Project, charged that the city’s election registrar, J. Kirk Showalter, allegedly violated federal lawby telling some polling place officials to turn away voters who weren’t on the precinct’s rolls without even offering them provisional ballots. Browne-Dias cited interviews she conducted with two top election “judges.” When she asked one of them under what circumstances they offered provisional ballots to voters, the official replied, “When they’re very persistent.”

Showalter denied telling any poll officials to deny ballots to voters who claim to have registered to vote, except for those who are listed as being registered in another district. “The proof is we had a lot of provisional ballots issued,” although the office hadn’t finished counting them by mid-week.

In addition, there were thousands of complaints about voters dropped from voting rolls in Ohio and elsewhere. Civilrights.org picked up on reports of six-hour waits for voters in Missouri and Pennsylvania and Virginia. All told, the national Election Protection hot line received more than 200,000 calls of all kinds, including more than 80,000 on Election Day alone.

Obama’s victory, said Michael Waldman, executive director of New York University’s Brennan Center, “shows that there’s a thirst for public participation. But we have a long way to go before we have a modern, user-friendly, inclusive voting system.” Barbara Arnwine, executive director of the Lawyers Committee for Civil Rights Under Law, had a harsher assessment: “The American election system is broken,” she said.

As Christopher Edley Jr., dean of the Berkeley Law School, wrote in The Washington Post, the long lines on Election Day should be seen as not merely a sign of voter enthusiasm, but as a“time tax“ akin to the now-illegal “poll tax” levied on blacks in the segregated South — and should also be barred by law.

Waldman and some other advocates believe President-elect Obama will support reforms because of his past work as a voting rights lawyer and his co-sponsorship of a bill barring deceptive election practices. “He has been a proponent of democracy reform,” said Waldman. The Center is pushing a new proposal that would overcome wildly diverse voting restrictions with European-style, permanent universal registration for U.S. citizens.

“Registration problems are the No. 1 source of disenfranchisement,” said Wendy Weiser, a senior attorney at the Brennan Center. “This takes the politics out of registration.”

Supporters say automatically adding voters from a variety of government data lists could mollify conservatives worried about registration fraud by groups like ACORN, as well as progressives who want voting opportunities expanded without having to devote resources to voting registration. That assumes that GOP officials are genuinely concerned about registration and voter fraud in their effort to purge voter rolls as opposed to simply seeking to hold down turnout. Yet Weiser contends, “It’s embarrassing to people from both the right and the left that there’s constant litigation over who can vote.”

But Brad Friedman, the prolific author of Brad Blog, is skeptical about Obama’s commitment to sweeping election reform. He notes that the Obama campaign and the Democratic National Committee generally avoided challenging voter suppression and machine failures, as in Nevada, in order to avoid raising alarms among potential Democratic voters.

The president-elect “understands the front-end vote-suppression stuff, but not the back end with the machines,” Friedman said. “Even if you help every legal voter to vote, what does it mean if a single person can flip the results [by hacking a machine] or the machine breaks down?”

If nothing else, the polemics around voter suppression and “voter fraud” during the presidential campaign showed a new growing awareness of election reform issues. Mainstream nonprofit labor and advocacy organizations, for example, are forming new State Voices coalitions to push for greater civic engagement via voter participation.

But as long as there are 13,000 different election boards with their own rules, the potential for manipulation of the voting system will endure and the hope for any meaningful election reform will go aglimmering — no matter who lives in the White House.

Research support for this article was provided by the Nation Institute Investigative Fund, now known as Type Investigations.