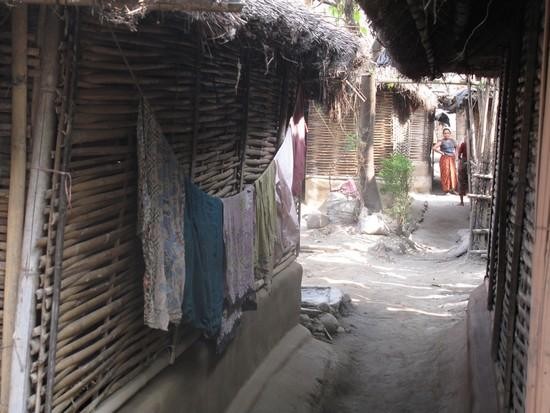 When Matimya Moktan, 41, saw her husband Manbahadur standing unannounced in their doorway after a nine-year absence in prison, her heart sank.

“I was sad to see him back here again,” said Matimya, one of more than 100,000 Bhutanese refugees living in United Nations-administered camps in eastern Nepal. “I had hoped I would see him again in Bhutan, but his standing back in our doorway meant we may never get back there,” she adds, seated in the corner of the family’s dark wattle-and-daub hut in the Beldangi I refugee camp, five kilometers outside the Nepalese town of Damak.

Manbahadur returned following nine years spent in a Bhutanese prison for having illegally re-entered the country and staging a protest demanding the return to Bhutan of his people, Bhutan’s ethnic Nepalese minority that was expelled in 1991.

Sandwiched between Communist China and largely Hindu India, tiny Buddhist Bhutan, with its population of a mere 600,000, has been given to fits of ethnic and cultural protectionism throughout its history. An impressive necklace of cliff-perched fortresses — or Dzongs — that dot the country’s mountainous perimeter testify to past efforts.

By the 1980s, when the ethnic Nepalese bloc mushroomed to represent one third of the kingdom’s population, Bhutan responded with a “one nation, one people” policy that at once bolstered the majority Drukpa culture by mandating its traditional dress and language for all, and restricted the rights of the ethnic Nepalese population. After a series of civil rights protests by the ethnic Nepalese, many of whom were Bhutanese citizens, the state clamped down—hard.

“We left because we were scared that they would imprison us, that they would beat us, that I would be raped,” Matimya told World Politics Review. In the weeks leading up to her family’s departure from Bhutan in 1991, she says, the army had begun to take women away from their houses.

This was just one tactic in what human rights groups say was a widespread campaign of ethnic cleansing of a minority population that claims to have arrived in Bhutan as early as the mid-1800s. Other tactics, say the refugees, included torture, beatings and the destruction of property.

But in today’s Bhutan, which in March made the transition from a century of absolute monarchy to become the world’s newest democracy, another narrative prevails.

“Deep inside, they know they never belonged to this country,” says Bhutanese Prime Minister Jigme Y Thinley in his office in Bhutan’s capital Thimphu. What is labeled elsewhere as an ethnic cleansing of Bhutanese citizens is seen in Bhutan as the “regularization” of an illegal immigration problem that had been left unbridled for decades. “They are refugees not of Bhutan, but of the ecological degradation, political upheavals, economic deprivation and insecurity in Nepal,” Thinley says, referring to Nepal’s 10-year civil war that ended in 2006.

For almost two decades, the fate of these refugees has been suspended between these two versions of events. Slow-moving diplomatic efforts at reaching a solution climaxed in 2001, when Bhutan and Nepal agreed to a Joint Verification Team to screen the refugees and establish who among them were in fact citizens. The project was halted after the screening of just one camp, when angry refugees attacked the Bhutanese emissaries.

The official documents resulting from that screening lie in a room in Damak, behind a door locked shut by two heavy padlocks—one belonging to Nepal and one to Bhutan. Diplomatic talks between the two countries are plagued by a similar inertia.

In the meantime, an insurgency has begun to emerge from the refugee camps. Inspired by the successes of the larger Maoist insurgency they witnessed in Nepal, numerous militant groups —still only an embryonic threat to Bhutan’s security— are stepping up operations, in order to incite a revolution and reclaim their so-called homeland. With names like the Communist Party of Bhutan, the Tiger Forces, the United Revolutionary Front of Bhutan, and United Refugee Liberation Army, these groups recruit and raise funds in the camps and, according to observers, are growing in force.

A recent offer by the U.S. and other Western countries to resettle 70,000 of the refugees has threatened to pull the demographic carpet out from underneath the militant groups, adding a sense of urgency to their cause.

The camps that Manbahadur Moktan left in 1999 when he went to protest in Bhutan were apolitical, still reeling from the trauma of dispossession eight years before. But on his return nine years later, he finds the camps charged with politics, divided into those eager to leave and those who form an angry, militant core that is adamant on staying. “There were no such insurgent groups in the camps before. None at all,” he said. “It’s only when I came back that I learned of their activities.”

Refugees are forbidden to organize politically in Nepal, so the groups are forced to keep a low profile. According to the insurgent leaders, the camps serve mainly as organizational and ideological crucibles for military actions that are carried out elsewhere — bomb-making and gun-running in India, and training and attacks on state targets in Bhutan.

“We are preparing a ‘protracted people’s war,'” says Comrade Umesh, the 27-year-old leader of one of the stronger insurgent groups, the Communist Party of Bhutan (Barat faction). “Like every Maoist struggle in the world, we have started a low-tech war. We use homemade weapons, explosives for ambushes and, after a certain point, we will progress to a high-tech war.”

For Bhutan, the concern is when exactly this transition will occur. Young militants frequently cross the narrow strip of India that separates Nepal from Bhutan and meet up with cadres there for training and guerrilla actions.

But they are not alone. While the militants cut new paths cross country, avoiding Indian police and intelligence agents, ordinary refugees follow well-trodden paths to the Indian town of Jaigon at the border with Bhutan, where relatives and friends — ethnic Nepalese still living in Bhutan — can come to meet them without fear of retribution.

Twice a year, 47-year-old N.B. Giri makes such a pilgrimage, leaving his home in the refugee camp and traveling 200 km of dusty roads to where the Indian plains end and the sudden, dramatic ascent into the dizzying reaches of Himalayan Bhutan begins.

“I would love to go inside and travel up into the mountains to [the capital] Thimphu, and see how much has changed and see all my friends and families,” says Giri as he slings his travel bag over his shoulder and salutes farewell to his family in the camp. “But all I can do is go there and peek across the border. For now, that will have to do.”

In Part 2 of this series Don Duncan follows Giri to the Bhutan border and explores the security threat Comrade Umesh and his cadres represent inside Bhutan.