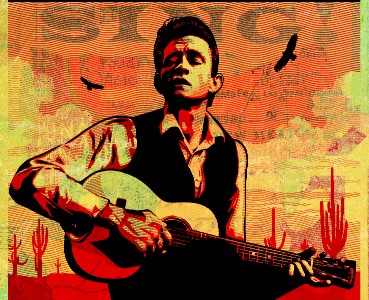 Johnny Cash recorded Bitter Tears in 1964, four years before his live performance at Folsom Prison and six years before he recorded Man in Black. More importantly, Cash placed himself in the middle of the fervent social upheavals gripping the nation at the time — the civil rights movement was rising, the Vietnam War was escalating, the anti-nuclear weapons campaign was galvanizing and the free speech and women’s movement starting to bloom. One year removed from his monumental hit Ring of Fire, Cash was facing censorship and an angry backlash from radio stations, DJs, and fans, for speaking out on behalf of Native people. Cash decided to fight back.

A Heartbeat and a Guitar tells of the collaboration of two distinct yet connected musicians —iconoclast Johnny Cash and little known folk artist Peter LaFarge — and the album they created, Bitter Tears: Ballads of the American Indian. It also tells of the unique personal, political and cultural struggles that informed this album — especially the fight for Native people’s rights — one that has influenced scores of musicians and activists, from Bruce Springsteen and Bob Dylan to American Indian Movement co-founder Dennis Banks and Native activist-artist John Trudell.

Weaving multiple narrative threads and bringing in the stories of the long forgotten Native war hero Ira Hayes (immortalized in the Iwo Jima flag-raising photo), legendary musicians and producers, courageous Native activists, polarizing political leaders and outspoken citizen-artists, D’Ambrosio’s A Heartbeat and a Guitar tells a sweeping story of an untold moment in Cash’s career. In this inimitable account — which includes 34 never before seen photos by photographs by Jim Marshall and Diana Davies — A Heartbeat and a Guitar strays out of the recording studio and into the presidential campaigns, government halls, Indian reservations, picket lines, bohemian cafes, university campuses, factory lines, civil rights marches, fish-ins and anti-war protests.

“Antonino D’Ambrosio has really done his homework like no one ever before. I performed with Cash for 40 years and have read every book written about him yet D’Ambrosio astonishingly reveals another side of Cash framed around perhaps his most important work,Bitter Tears. A Heartbeat and a Guitar is a rare and extraordinary work, thanks to D’Ambrosio’s exceptional and masterful storytelling. This book must be read, not just by Cash fans, but everyone who loves music and believes in its power and spirit. D’Ambrosio’s work, like Cash himself, is highly original and a force to be reckoned with.”
— Johnny Western, musician and longtime emcee of The Johnny Cash Show

“[The book] is a rich history, not only of Johnny Cash’s life, but of the Indian struggle for justice… full of fascinating character sketches of the great folk singers of the Sixties, and their part in the social movements of that exciting era. I believe D’Ambrosio has made an important contribution to the cultural history of our time.”
— Howard Zinn

“This book is a truly fascinating journey, charting the historical and social context of a courageous musical statement by one of our greatest rebel voices.”
— Jim Jarmusch, filmmaker

“Antonino D’Ambrosio is the voice of a new generation–passionate, intelligent and fierce–whose work educates and inspires. He now brings his unique voice to tell a unique story of Johnny Cash’s recording of the protest record Bitter Tears. It’s the album no one knows about but is perhaps Cash’s greatest record–and Antonino proves it.”
— Chuck D of Public Enemy

Antonino D’Ambrosio is an author, filmmaker and visual artist.