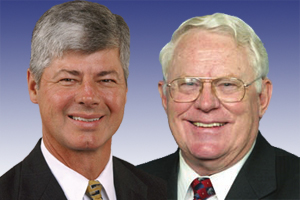 American women will pay the price for the Democratic dithering that allowed Saturday’s passage of the Stupak-Pitts amendment, a worm virus inserted into the House healthcare reform bill with surgical precision. But the Democratic Party will suffer collateral damage.

Stupak-Pitts isn’t just “the biggest restriction on women’s right to choose in our generation,” as Rep. Diana DeGette of Colorado puts it; it’s also evidence that on abortion the Democratic Party is now captive, just like the GOP, to Christian conservatism. Of course, Republicans traded away their party’s moderate wing for real electoral gains, a base that propelled them to power for decades. The Democrats, already in power, sucker-punched themselves, and all they have to show for it is a big fat shiner in the shape of Bart Stupak’s knuckles.

But if Stupak, a former state trooper from Michigan, provided the muscle, his partner, Joe Pitts — a Pennsylvania Republican with decades in the trenches of the antiabortion battle — may have brought the brains, and more, a new Christian right coalition custom tailored for the Democratic Party’s growing religious conservatism. Stupak is Roman Catholic; Pitts is evangelical. Both are members of the predominantly evangelical organization called the Family; Stupak lives in its C Street house. Together, they’re poster boys for the evangelical/conservative Catholic alliance known as “co-belligerency,” a culture war strategy designed to take territory within the Democratic Party as well the GOP.

Stupak, the Democratic co-chair of the House Pro-Life Caucus, insists that his amendment does nothing more than ensure that the 1976 Hyde Amendment, which forbids the use of federal funds for abortions, is carried over into healthcare reform. Even some of Stupak’s angriest critics within the party concede that Stupak might actually believe that — nobody has ever accused him of being a subtle legislator. (Though Stupak himself, long known for his amiability, now boasts that he was hiding his “wolfiness” all along.) But the facts are plain: Stupak-Pitts will use the Hyde Amendment as a lever with which to radically roll back abortion rights, effectively strong-arming private insurers — most of which will be enmeshed with the federal government now — into abandoning coverage for abortions.

Much is being made in the media about the role played by the U.S. Council of Catholic Bishops, which lobbied hard for the amendment. “We just have to accept this as a Catholic thing,” goes the new conventional wisdom. Leaving aside the fact that a strong majority of American Catholics are pro-choice, that story line obscures the increasingly significant role played by evangelical conservatives within the Democratic Party.

Start with Stupak and Pitts themselves. Although Stupak is a Catholic, he’s lived since at least 2002 in the C Street house run by the Family, which cultivates political leaders on behalf of a long-term vision of what Joe Pitts, speaking at last year’s National Prayer Breakfast (the group’s only public event), called “God-led government.” After the summer sex scandals of Sen. John Ensign, Gov. Mark Sanford and former Rep. Chip Pickering, C Streeters all, made the Capitol Hill address infamous, Stupak denied any knowledge about the house he lives in. “I don’t know what you’re talking about,” Stupak told Michigan reporters when asked about his residence in the house, where he’s been enjoying below-market rent for the last seven years, courtesy of C Street’s tax-exempt status as a church. But when the Los Angeles Times asked Stupak about his role there in 2002, he pleaded secrecy instead of ignorance: “We sort of don’t talk to the press about the house.”

That’s putting it mildly. In its internal documents, the Family refers to itself as an “invisible organization” and the “prayer cells” into which it organizes politicians as “invisible ‘believing groups.'” That doesn’t make it a conspiracy. Rather, the Family represents the soft-sell side of conservative evangelicalism, a social movement that goes beyond — or maybe beneath — pulpit pounding and political purity in pursuit of ideological influence on both sides of the aisle. Longtime Family leader Doug Coe, dubbed the “stealth persuader” on Time magazine’s list of the 25 most influential evangelicals, declares in a sermon delivered to evangelical leaders that “the more invisible you can make your organization, the more influence it will have.”

Joe Pitts can testify to that. It’s a safe bet that until Stupak-Pitts, few Americans beyond Pennsylvania Amish country had even heard of the avuncular Republican, a former gym teacher who rarely attaches his name to legislation. And yet he’s been a driving force in the antiabortion fight for more than three decades. It was Pitts, a “core” member of the Family, who helped bring antiabortion politics into the organization back in the early 1980s. The Family’s focus has always tended toward foreign affairs and economics; Pitts merged the two with the red-hot politics of the abortion wars, quietly exporting free-market fundamentalism and draconian social policy overseas. Pitts and Stupak have joined forces on that front before, teaming up to try to turn President Bush’s underfunded but laudable President’s Emergency Relief for AIDS initiative into an antiabortion crusade. What they couldn’t achieve abroad, they’ve now brought back home, and then some.

They had plenty of help, starting at the Family’s C Street House. It’s home not just to Stupak but also to antiabortion Democrats Mike Doyle of Pennsylvania and Heath Shuler of North Carolina, and two of the Senate’s fiercest abortion foes, Oklahoma’s Tom Coburn — an obstetrician who once mused on applying the death penalty to abortion providers — and South Carolina’s Jim DeMint, famous for pledging to make healthcare reform Obama’s Waterloo. Other Family associates lining up behind Stupak-Pitts include evangelicals Mike McIntyre, D-N.C., John Tanner, D-Tenn., and Lincoln Davis, a Democrat from Tennessee who once proclaimed that no Republican could “outgun, out-pray, or out-family me.”

These Family ties don’t mean that Stupak-Pitts is a plot hatched at C Street. The Family offers politicians a “worldview,” not a vote machine. In the documents stored at the archive of the Fellowship Foundation — one of the Family’s multiple nonprofit entities — at evangelical Wheaton College, congressional briefings typically lead off with reminders that the Family’s prayer groups don’t take direct action but rather facilitate the behind-the-scenes relationships that lead to action. “One person grows desirous of pursuing an action,” Sen. Sam Brownback, a Family man and former C Street resident, explained the process to me, “and others pull in behind.”

Which raises the question: Who’s pulling whom? Did backbencher Bart Stupak really come up with the bluff that led pro-choice Democrats to abandon not one but two compromises, one of which Stupak himself seemed to be signing off on earlier this summer? Or was it Pitts, an abortion-wars warrior since the 1970s, and a longtime leader of the House Values Action Team — an off-the-record caucus of religious right organizations and members of Congress — who drew up the blueprint?

Neither Stupak nor Pitts is talking. Of course, if they just keep quiet, the press will pin it on the bishops — who, to be fair, are more than happy to take credit. That version of events neglects the role of relationships forged within the evangelical context of the Family — a group founded in the spirit of virulent anti-Catholicism, and which maintains to this day that being Catholic brings you no closer to Christ than being Jewish or a Muslim — and the growing evangelical movement within the Democratic Party. A source close to the Faith Table, a gathering of ostensibly progressive Christians helmed by evangelical leader Jim Wallis, notes that the group has been agitating for Stupak-Pitts for months, with Wallis declaring Stupak-Pitts the most important vote of the year.

He may have been right about that. Right now, even the diluted healthcare reform bill that’s limping toward more mauling in the Senate looks like the result of a historic vote. But as a weather vane, Stupak-Pitts tells us which way the wind is blowing. Last time the Democrats possessed this much power in Washington, the Dixiecrats tried to hold the party hostage. Now, it’s the faith-based Democrats. Dixiecrats were racists, plain and simple; the faith-based Democrats are a more complicated bunch, a mix of genuinely moral conservatives, many of them to the left on economic issues, political cowards, and default Blue Dogs. They’re anti-choice and anti-gay but, by God, they’re about love, not hate, a gentler fundamentalism, a faith based in the conflation of Christianity and the Constitution, not the substitution of one for the other. So that’s progress, right?

“Sure,” says the Faith Table dissident who reports that the council of “progressive Christians” was not willing to even consider any deal that didn’t leap past the Hyde Amendment into a new country — or maybe it’s old — of abortion restrictions. “If you’re playing horseshoes with James Dobson.”