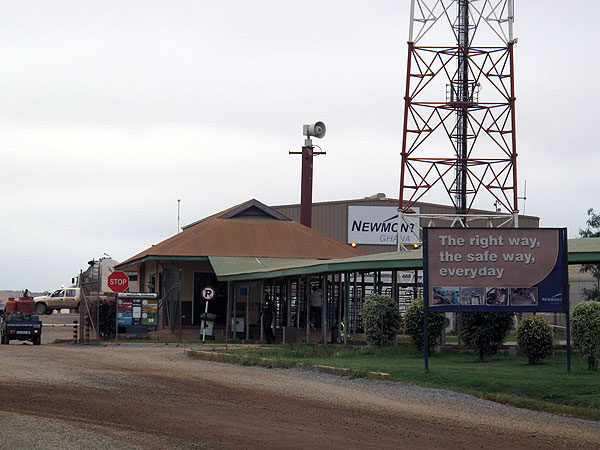 Ghana is one of the world’s top producers of gold. And with gold’s price at record highs, more companies are heading to the African country for a piece of the action. Anna Boiko-Weyrauch reports.

ANNA BOIKO-WEYRAUCH: At the government’s Minerals Commission in the capital city of Accra, director Joseph Aboagye, unfurls a huge map onto his desk.

JOSEPH ABOAGYE: We have a map showing all the concessions that have been granted in the country.

Red and blue boxes on the map show where companies are looking for gold. Green is where there’s active mining. The gold-rich areas of Ghana are saturated with colors; they’re covered in mining activity.

BOIKO-WEYRAUCH: There are very few parts that are not covered it looks like.

ABOAGYE: Yeah, that’s true. But you can still see some open spaces.

The map didn’t always look this colorful. But Aboagye says in 2006, his government changed its mining laws to attract international investors.

ABOAGYE: The old law was operated for about 20 years and then somewhere along the line we saw that we were not competitive so we reviewed it.

The map now shows that over 220 companies are mining or looking for gold in Ghana. One of them is Newmont. The Colorado-based miner is the world’s second largest gold company. Right now, Newmont has one surface mine in Ghana. Before it’s done, almost half a billion tons of rocks in all will be blasted out of the ground. It’s a huge amount of work. For every three rocks that come out, only one of them has gold. All those rocks have to go somewhere, usually on land where locals live and farm.

Newmont had to relocate about 10,000 people to make way for its mine. In one resettlement community, Ama Nokpeta feeds her toddler in front of the small yellow house Newmont moved her to four years ago. She says life is worse after the move.

AMA NOKPETA: They deceived us, they really lied to us a lot. All the promises they made, they haven’t kept one of them. They said we wouldn’t have to buy water, water would be piped to all our houses for free. They’d give us electricity. They’d employ our husbands. A whole lot of promises.

Newmont declined to comment for this story. But activists and community leaders on both sides have been vocal about the company’s operations. Recently, Newmont has gotten a lot of attention for its plans to open another, equally large mine, northeast of Accra.

Martha Asamoah is cutting back weeds on her orange and palm tree farm. Once the new mine is built, this place will be a reservoir for ore after the gold is extracted — mine waste. Martha and the other farmers on this land will get compensation from Newmont. The company pays about $1,400 for an acre of palm trees. Martha says she can earn a little under that for an acre of trees each year, but she can keep earning it as long as the trees last, 25 years.

MARTHA ASAMOAH: If I continue to grow my crops, I’d earn more and more each year as the trees get bigger. Every year it adds up, and so that’s why we don’t want Newmont to come here.

But many locals are hopeful about the potential mine; they see new jobs and new development. The community leaders in the area have all spoken up in support of the new project. At the government’s Minerals Commission, Joseph Aboagye says the mining companies have been good for Ghana.

ABOAGYE: They are contributing a lot to the local community. Some have been providing them with hospitals, roads, schools.

Belinda Sasu is frying fish and sweet potatoes by the side of the road near Newmont’s proposed mine site. She says her business will improve when the mine opens, but she’s also worried about the town’s future; some waste products from mining contain cyanide.

SASU: I think we will have disease; the chemicals they’ll be using here will affect us sometimes.

Last month, Newmont’s current mine had a cyanide spill, killing fish in a nearby river. The company says it was a small incident and has been cleaned up. For now, Newmont is waiting for the Ghanaian government to sign off on the new mine. The company says its new mine will produce just as much gold as the current one. That mine earned almost $175 million last year.

Anna Boiko-Weyrauch’s report was supported by the Investigative Fund at The Nation Institute.