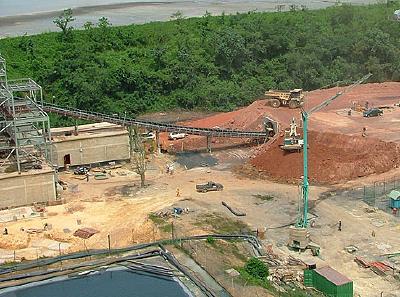 With gold prices at record highs, many companies are trying to get in on the action and mine in Africa’s second-largest gold producer, Ghana. But one Canadian company already operating in Ghana is running into problems with the local community and the government.

People in the town of Prestea took to the streets earlier this year to protest mining by the Canadian firm Golden Star Resources. Community activist Eric Sherwood says locals sent petitions to the capital and blocked the company’s cars on the road.

Many people in Prestea are angry because they say Golden Star is a bad neighbor. One of its mines is right next door to the town, a few-hundred meters from shops and buildings. Company spokesperson Elaine Kwami.

Right now, machines move around dirt on the edge of the Prestea surface mine, 300 kilometers from the capital, Accra. Golden Star finished mining here two years ago and has to fill the pit back up.

High school student Jina Abban says the noise from the explosives at the mine, the blasting, used to make studying impossible.

“Any time we hear the bell ringing it is time for blasting, so we run away from the class,” said Abban. “We will not learn until they have finished doing their blasting.”

So when the people of Prestea heard the company wanted to build another pit mine, they spoke out. Especially since the area proposed for mining is next door to the area’s best school.

They are also worried about the new project’s effect on the town’s underground mine. It used to be the mainstay of the community, but went bankrupt in 2002. A few years later, Canadian miner, Golden Star took it over. Elaine Kwami says it will reopen eventually.

“You have water being pumped everyday, and then work is also going on. But as to exactly say when we will start mining, that is a bit difficult to say at this stage,” said Kwami.

When the mine went bankrupt, thousands were out of work. People like Aisha Issis’ husband. He use to mine gold underground, but Issis says he was laid off, and the family fell on hard times.

Issis says they did not have any money, and her kids were kicked out of school because they could not pay the fees. She blames Golden Star for ruining the jobs and the beauty of the town.

“There is extremely high expectations. When you are the single largest employer, everybody looks to you not just for employment, but for more social, should I say, support,” said Golden Star’s Elaine Kwami.

Kwami says no one appreciates what the company has done for the community, like training people in agriculture. Today, Golden Star employs about 800 people in Prestea. At one point, the old underground mine employed around 3,000 people.

According to a Golden Star report, the company has the government’s permission to build a new mine pit. The report says it just needs the go-ahead from environmental regulators, which it expected to get this year. But spokesperson Elaine Kwami could not confirm that.

“As for expansion, when the time comes it will be made public,” added Kwami. “If there is a need to start mining in any other area, it involves regulators and so on.”

One of those regulators is Ransford Sekyi, who heads mining at Ghana’s Environmental Protection Agency.

“We had some objections from the communities,” said Ransford Sekyi, who heads mining at Ghana’s Environmental Protection Agency, and one of the regulators

Because his team found issues at Golden Star’s mines, they did not give the company a permit. Issues like taking too long to fill in that big pit at the edge of town.

Sekyi says Golden Star has work to do before it can get a new environmental permit.

“Holistically, we are looking at all the factors: the projects’ designs, community issues, legal compliance,” said Sekyi. “So when all those things are done, and it is complete, then we think of permitting.”

The environmental regulator cannot say when that might be. But Golden Star is turning a profit in Ghana. In November, the company broke its own sales records for the quarter, making more than $100 million.