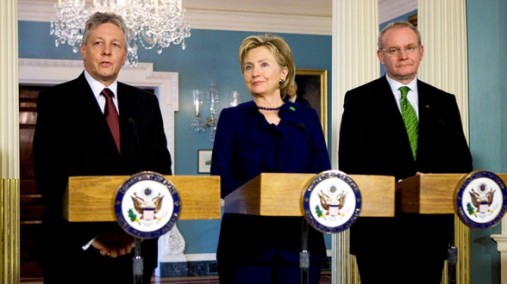 More than two years after his brutal death, the people in this rural village think they know who killed Paul Quinn.

They just can’t prove it.

The killing in October 2007 of Mr. Quinn, a 21-year-old truck driver who grew up in the militant rural county known as South Armagh, offers a stark reminder that Northern Ireland’s legacy of paramilitary violence has yet to fade more than a decade after the U.S.-brokered agreement ended the war between local Roman Catholics and Protestants loyal to British rule.

Instead, some branches of the Irish Republican Army (IRA) have morphed into criminal gangs that prey largely on fellow Catholics. Mr. Quinn is cited as the latest example.

Ireland’s police force says Mr. Quinn was lured to a remote farmhouse near Castleblaney, just over the border in Ireland, and beaten to death by a masked gang wielding metal bars. The beating was so vicious that nearly every bone in his body was broken.

A friend who was with him also was beaten but not as severely. Speaking on the condition that his name not be used because he still fears for his safety, the friend said one of Mr. Quinn’s attackers shouted, “Now you know who the bosses are here now.”

The police have followed 1,200 leads and taken 400 statements from witnesses but have not filed any charges.

The Quinn family contends Mr. Quinn was slain on the orders of local IRA commanders for fighting on one occasion with an IRA member and on another with the son of a member.

“He stood up for himself,” said the victim’s father, Stephen Quinn. “That was his downfall. He took a lot but didn’t like someone without authority telling him what to do.”

The South Armagh brigade of the IRA is officially at peace. Along with the rest of the IRA, its members surrendered their weapons as part of the peace process. Today, leaders of pro-British unionists and the IRA’s political arm, Sinn Fein, jointly govern Northern Ireland.

But Mr. Quinn’s death highlights ongoing tensions between a generation of young Catholics – born after the conflict with little loyalty to the IRA – and aging IRA foot soldiers who say they are entitled to rule Catholic neighborhoods.

“He was a child of the peace movement,” said Pat McNamee, a former IRA member and Sinn Fein counselor. “He had no reason to respect people in the IRA. They were not carrying out campaigns against the Brits. The war was over.”

The latest incident is reminiscent of the January 2005 killing of Robert McCartney, a Catholic man outside a Belfast bar, which was blamed on the IRA. When Sinn Fein leader Gerry Adams visited Washington for St. Patrick’s Day weeks later, he was snubbed by President Bush and Sen. Edward M. Kennedy, Massachusetts Democrat.

The White House invited the president of Ireland and relatives of Mr. McCartney for the traditional presentation of a bowl of shamrocks to show that the snub was not aimed at the Irish people.

After denying any involvement, Sinn Fein and the IRA later owned up and suspended or expelled 10 members linked to the killing.

The Catholic-Protestant war, often called “the Troubles,” was a period of ethno-political conflict that spilled over at various times into England, Ireland and continental Europe. The Troubles are conventionally dated from the late 1960s and considered by many to have ended with the Belfast Agreement, also called the Good Friday Agreement, of 1998. That accord established a mechanism for Catholics and Protestants to share authority.

In 2007, Sinn Fein, the political arm of the IRA, and the pro-British Democratic Unionist Party, entered into a power-sharing agreement to govern Northern Ireland.

Mr. Adams, still the leader of Sinn Fein, has denounced the Quinn killing and urged full cooperation with the police. But some say the Sinn Fein leadership has done little to rein in the lawlessness and violence that have turned some IRA fighters into career criminals.

“It’s a mafia now,” said Jim McAllister, chairman of the Quinn Support Group. Both the IRA and Sinn Fein, he said, “are a disgrace.”

Punishment beatings and shootings were brutal facts of life throughout the Troubles. Paramilitaries on both sides of the sectarian divide carried out the violence.

Although bombings have stopped, nearly 1,000 people have been forced into exile since 1998 to avoid residual violence.

Most head to British mainland cities such as London and Manchester. But separation from family and friends can drive them into depression and further trouble. Returning home, even for a short visit, can be dangerous, even fatal.

Those singled out for attacks are often accused by the paramilitaries of being involved in crimes such as supplying drugs, or joyriding.

Sinn Fein leaders insist that Mr. Quinn was killed by criminal gangs. But his family and friends say that is a cover for what remains of the IRA, with many of its members involved in smuggling and other illegal activities.

The fact that people are speaking out against the IRA at all signals a significant change in an area that for decades viewed its members as heroes and built memorials to its dead.

“Whatever, they planned, they beat the man to death savagely,” said Mr. McNamee, the Sinn Fein counselor. “Nothing makes me question [that the IRA] carried it out.”

He cited the black military-style clothing that the killers wore, the planning required to lure Mr. Quinn to the shed and the manner in which the shed was cleaned after the beating, leaving little forensic evidence.

“That takes planning and organization and a significant number of people outside the shed to make sure they are taken to the shed and everything recovered,” Mr. McNamee said. “It’s the modus operandi of the IRA.”

Shortly after the killing, the Ulster Unionist peer Lord John Lairdused parliamentary privilege in the House of Lords to name Vincent Treanor as a senior member of the IRA who, Lord Laird claimed, had ordered the killing of Paul Quinn. Mr. Treanor, who was questioned by police and released, denied being a member of the IRA or having any role in the slaying.

Lord Laird also said Sean Hughes, a reputed IRA member who has been linked with a 1996 London bombing that killed two people, authorized the Quinn killing. Mr. Hughes denied the accusation. Last month, police seized property belonging to him as part of an investigation into money laundering. Sinn Fein condemned the seizure.

A spokesman for the Independent Monitoring Commission, which follows paramilitary violence, said last year that there was no evidence that the IRA had ordered or sanctioned Mr. Quinn’s killing.

The commission said the killing was the result of local disputes but that some IRA members or former members may have been involved.

“There’s no doubt the … IRA was involved,” said William Frazier, founder of Families Acting for Innocent Relatives, a nonprofit organization that advocates for victims of paramilitary violence. “A few other young fellas saw Quinn getting away with standing up to the IRA. It gave credibility to other young people they could do it too. The IRA had to put it to an end. A beating like that can’t go on without IRA approval.”

As police continue to look for Mr. Quinn’s killers, his family honors his memory with billboards that denounce his killing and urge people to come forward and confess what they know.

“We died, too, that day,” said Mr. Quinn’s mother, Breege. “We get up in the morning and we are just dead inside.”

Reporting for this article was made possible through a grant from the Nation Institute Investigative Fund.