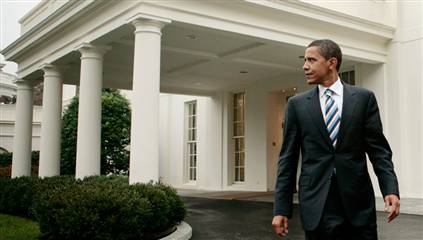 President Obama outside the White House

In the year since President Obama took office, he has made significant progress on transparency and access issues. Still, there have been plenty of missed opportunities and much work still to be done.

Background: Since it was formally recognized in a controversial 1953 Supreme Court case, the state secrets privilege allows the executive branch to exclude, usually without judicial review, pieces of evidence that, they assert, might jeopardize national security from litigation. Not only did the Bush administration make greater use of the privilege than its predecessors, his administration also asserted that it could use the privilege to exempt entire categories of government action out of the bounds of litigation.

What Obama’s done: During his presidential campaign, Obama expressed reservations with the Bush administration’s application of the privilege. When asked about the issue at a spring press conference, Obama said that “the state secret doctrine should be modified.” In the fall, his Justice Department issued a new internal policy that would require greater internal review before making a state secrets claim. The guidelines, which are not judicially enforceable nor binding on any future administration, fell far short of what civil libertarians and transparency advocates had hoped for. Meanwhile, the Obama administration has held the Bush line on state secrets in a series of cases dealing with the previous administration’s interrogation and intelligence practices. The administration has declined to endorse one popular fix, the State Secrets Protection Act. Vice President Joe Biden and Secretary of State Hillary Clinton were co-sponsors of the bill while they were senators.

The Freedom of Information Act (FOIA)

Background: Enacted with President Johnson’s signature in 1966, the Act remains a keystone of the open government movement. Shortly after coming to office, Bush’s first Attorney General, John Ashcroft, issued an order suggesting that federal employees, faced with a records request, should broadly apply portions of the law allowing the government to withhold certain categories of records, overturning a more access-friendly Clinton standard. In the latter part of the Bush administration, data suggested that many agencies took longer to respond to FOIA requests than they did at the beginning of the decade.

Obama’s actions: On the first full day of his administration, Obama signed a presidential directive ordering the attorney general to develop new guidance to replace the Bush-era standards. Eric Holder issued new guidance essentially restoring the Clinton standard in March. The administration’s Open Government Directive calls for greater monitoring of agency FOIA backlogs, and requires the worst offenders to craft plans to reduce them by 10 percent annually. The record has been more mixed in FOIA litigation: the Obama administration reversed its initial decision to release photos depicting detainee abuse in Afghanistan and Iraq, pursuant to an ACLU FOIA lawsuit, and began laying the groundwork for a long shot appeal that would, at a minimum, delay release. Meanwhile, Congress passed a law, with administration support, exempting the photos from disclosure; the administration promptly made use of it, effectively stemming their release.

Background: While local and state governments have had more success, the federal government moves slowly, and has so far done little to use the Internet to change the way our elected officials and civil servants interact and communicate with the public.

What Obama’s done: On his first full day in office, President Obama signed a memorandum charging the nation’s Chief Technology Officer — a newly created position — with returning, within four months, a set of recommendations for what the administration termed the Open Government Directive, a document outlining ways for the government to operate with greater “transparency, public participation, and collaboration.” Obama’s nominee for the CTO position went unconfirmed until May 21, and at the four-month mark, the administration launched a public comment process, soliciting public input on what should be in the Directive. On December 8, the administration finally hosted a Webcast to mark the release of the Directive, which was met with mostly positive reviews. It remains to be seen if sufficient bureaucratic willpower exists to bring the directive to fruition.

Background: A prime goal of the modern-day transparency movement is to get government to release the many kinds of scientific, analytic, enforcement, and regulatory data it routinely collects and develops. Making serious steps to do so is a tall order, and even if everyone inside government agreed that doing so was a good idea, many basic hurdles exist. Disseminating data online isn’t a priority for the agencies, or their budget makers. What little online data and information that is available from any individual component of the government won’t necessarily be in an open standard.

Obama’s actions: On May 21, the administration launched data.gov, a Web site to increase access to government data in open, machine-readable formats. The Open Government Directive calls for agencies to identify and release three high-value data sets by January 22, 2010. Even if those goals are reached, there will be a long way left to go.

Background: The Secret Service maintains a database that records the comings and goings of nearly every visitor to the White House. When those records were requested under the Freedom of Information Act in the Bush administration, the White House responded by claiming the data were actually presidential records, which are treated differently — and are impossible for citizens to obtain during a president’s term.

Background: While forty-nine states have some version of the privilege, there is no federal statute or national case law that allows journalists to decline to testify about information they may have obtained in the course of their reporting. Even though past attempts have drawn support from both sides of the aisle, the Bush administration was a steadfast opponent of creating a reporters’ privilege.

What Obama has done:
Obama spoke highly of creating a federal shield law while a senator and a presidential candidate. He even was a cosponsor of a media coalition favored bill to do so in the 110th Congress. But as president, he gave journalists and lobbyists working on behalf of establishing a federal shield law a scare by demanding changes to the bill that weakened its protections. Eventually, a compromise was brokered that the bill’s advocates agreed would still result in a worthy privilege. His administration stands fully behind the modified legislation, which now awaits debate and approval before the full Senate.

Other Resources:
Special Report: Shields and Subpoenas, The Reporters Committee for Freedom of the Press.

Background: Routine off-the-record briefings are a creature of Washington, and while it may be naïve to think that they’ll ever fully disappear, there’s little to recommend the practice. What reason is there — other than to avoid accountability for what is being said — that the administration can’t let reporters tell the public which “senior administration official” is describing the administration’s position on, say, detainee policy, or stimulus progress, or how the president arrived at his decision on Afghanistan? (Scott McClellan, Bush’s press secretary from 2003 to 2006 said the practice didn’t make much sense to him, and decided not to conduct them.) Anonymity has a place in Washington reporting: when someone could suffer repercussions for divulging information that their boss would rather not have the public know, for example. But when your anonymous briefing has been arranged by the White House press shop, it’s hard to see how it’s justifiable. Meanwhile, journalists desperate for whatever information they can get are in little position to decline a conduit of information that other colleagues will agree to use.

Obama’s actions: While there was some movement among journalists in Washington in the twilight of the Bush administration to raise protests about routine off-the-record briefings, journalists made a serious stand at the dawn of the Obama administration, which had promised a new era of transparency and openness. After receiving letters and complaints from the White House Correspondents Association and a group of D.C. bureau chiefs, top White House communications officials met with journalists to discuss the issue. Print journalists were irked that the anonymous “senior administration officials” were, after conducting their background briefings, turning around and mouthing the same talking points on television. While many journalists acknowledge that the briefings have been trimmed and the most egregious abuses eliminated, the tool is still being used. When the administration announced its acquisition of Illinois prison facility to house former Guantanamo detainees, the anonymous briefers even declined to identify themselves to the reporters on the call.

The Columbia Journalism Review wishes to thank The Investigative Fund of The Nation Institute for supporting this project.

Clint Hendler is the managing editor of Mother Jones.