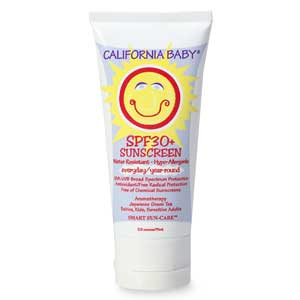 California Baby is one of many sunscreen brands that uses micronized titanium dioxide | Credit: CALIFORNIA BABY

Seated in a crowded conference center in Research Triangle Park, N.C., last fall, some 50 chemical industry scientists, university researchers, consumer advocates, government regulators and this reporter pored through the known safety data on nanoscale titanium dioxide, (abbreviated as nano-TiO2). It is a chemical commonly used in sunscreens, cosmetics and food packaging. While these tiny compounds are assisting “mold prevention” and “interfering with UV reflection,” this advisory group considered what unanticipated impact the man-made microscopic compounds might also be having on the health of human beings or the environment.

The group, convened and paid by the Environmental Protection Agency, was charged with developing a strategy to study the effects of nano-TiO2, a virtually invisible form of titanium dioxide. The experts weren't trying to determine whether nano-TiO2 is safe for humans when it is inhaled or absorbed through the skin, or whether it is dangerous to fish and wildlife when the microscopic element enters the water system and soil. The purpose of the gathering was merely to calculate how EPA might begin to answer such questions.

The American Chemistry Council, the main lobby group for companies engineering nanoparticles for commercial use, had its own agenda: staving off regulations. Some of the international chemical companies seemed worried that there was little uniformity in what different countries consider to be nanoparticles or nanotechnology. Several of the veteran academic toxicologists were haunted by the unpleasant surprises of the past, and feared that nanoparticles may become the new Persistent Organic Pollutants, or chlorofluorocarbons, which leached out of refrigerators and aerosol sprays in the last century, damaging the ozone layer. Researchers from non-governmental organizations, among them the Environmental Working Group, Consumers Union and the Project on Emerging Nanotechnologies, were eager to give their opinions. But underlying the whole workshop was an inescapable sense that the meeting was 10 years too late.

“The horse has already left the barn,” said workshop participant Gary Ginsberg, a Connecticut toxicologist, who is on the faculty of the Yale School of Public Health and the University of Connecticut School of Community Medicine. Nanomaterials are “already out there. In this case the environment is the guinea pig. All that we can do at this point is really try to do a good job of seeing what is getting into the human ecology.”

Ginsberg's concerns and those of the EPA lie not just with nano-TiO2, but with the entire, fast-growing class of engineered nanoparticles — some of which were in use as far back as the 1950s, but which became common in household products starting about 20 years ago.

In 2009, according to Lux Research, revenues from nanotechnology-enhanced products were $224 billion. (The market for the nanoparticles alone was $1.1 billion.) Nanoparticles are described as having at least one dimension that measures between 1 and 100 nanometers, and unique properties arising from their microscopic stature. By comparison, an average human hair is 100,000 nanometers wide. But these small-scale elements are a large-scale business. Laboratory-engineered nano products range from nano Silver, which is used as an antimicrobial agent in baby carriages, anti-odor socks and other household products, to carbon nanotubes, which, among other things, are used to strengthen bicycles, bats and tennis rackets, at a fraction of the weight of steel.

Nanoparticles can be far more valuable for certain uses than their conventionally sized counterparts. Nano-TiO2, for example, is viewed by many consumers as a better sun block than conventional titanium dioxide because it is so small that it doesn't show on the skin. Nanomaterials can be valuable in cleaning up toxic waste, making energy more efficient, and may ferret out cancerous tumors and kill them. Researchers are also developing nanoparticles for other medical, electronic and military use.

The bad news is that nobody knows what these nanomaterials can do if they are inhaled into the lungs, enter the bloodstream or are absorbed through the skin. Nobody knows what their effect might be if they end up in your water supply or the local dump. As a substance is scaled down, its properties can change. In its conventional state, for example, a substance may not tend to react with other substances that it comes in contact with, or change with heat or cold. But, in its nanoscale form, it may become very reactive and also serve as a catalyst, increasing the toxicity of chemicals that it is mixed with to create a product or compounds in the environment. The limited research with nano-TiO2 suggests this is possible. FDA, which has jurisdiction over cosmetics, says it is planning studies to determine the effect of certain nanoparticles on skin penetration.

“We just don't know what could happen if it's released into the environment,” says one EPA staffer who asked not to be named. He noted that certain studies have shown that when fish are in water containing nano-TiO2 as well as arsenic or cadmium, the fish absorb greater amounts of arsenic and cadmium than those that swim where no nano-TiO2 was present. Those chemically tainted fish can end up on your dinner table.

“Right now we are just pointing to questions, we don't have the answers,” the staffer said. “We are trying to figure out where our research should be directed.”

To help EPA develop its research strategy, participants were given packets that consolidated what little information is known about the unexpected effects of the infinitesimally small compound's toxicity, the tendency to react with other chemicals, and the potential to accumulate in the environment and the human body.

Then, they were asked to choose the 10 most important questions covering the potential environmental and health implications of nano-TiO2, during it's “life cycle” from production to disposal — i.e. does the chemical persist in the environment, and if so, where? Results were to be reported to EPA's Scientific Board of Counselors, which will use the rankings to recommend a research strategy later this year.

Last fall's advisory panel exercise provided a sobering sense of how little is known. The debate over priorities was contentious.

Of the 100 unknowns defined by EPA, participants argued over such questions as is it more critical to figure out whether vermin could breach storage containers and release nano-TiO2 or study whether climate affects the compound's behavior? The unknowns covered a vast range of “reality checks.” How much nano-TiO2 is being used in the United States? How are people most likely to be exposed? Are children more vulnerable from exposure than adults? How important is it to test the chemical on the skins of people of different races, or on people with skin irritations? If inhaled, does it cause cancer? How long will it persist in the ground, air or water? How can the compound be safely transported? Can the tests they come up with for nano-TiO2 be applied to other nanoparticles?

Todd Kuiken, a research scientist with the Project on Emerging Nanotechnologies, part of the Washington-based Woodrow Wilson Center for International Scholars, who participated in the workshop, says the government should have made more progress evaluating nanomaterials by now. “It seems to be that the agency is just saying let's rank [our concerns] again and let's rank it again and never actually do anything on the rankings,” he said. “Let's actually get some action done on these questions we keep asking.”

In the meantime, neither EPA nor state regulators know much about what nanoparticles are being developed, and which are already in use. In 2008, when EPA launched its Nanoscale Materials Stewardship Program, which called on companies to submit nanoparticle test data, the agency had high hopes. Its “in-depth program” asked businesses to voluntarily develop and submit test data for nanoscale materials. Only five firms agreed to do it, according to EPA's interim report in January 2009.

Some of the businesses claimed that the nanoscale formulation of a compound is the same as its conventional form, so no further scrutiny is needed. Others claimed such records were confidential. The National Science Foundation, in partnership with EPA, recently financed academic consortiums to test this theory, and do other research, but conclusive results aren't expected for years.

At the Research Triangle workshop, state regulators complained that they couldn't protect consumers if they didn't know what was being sold in their states. To this end, California recently began requiring manufacturers to submit a list of carbon nanotubes, some of which have been found to have the same physiological properties as certain asbestos fibers linked to mesothelioma.

“The one thing we are missing that other countries are not missing is critical information as to the structure and characteristics of a chemical,” says Maria Victoria Peeler, a senior policy analyst with the Washington State Department of Ecology. EPA has been battling to get additional information from businesses in cases where it's restricted. What bothers Peeler is that EPA and state environmental agencies have to fight companies to get information on what's in their products and what safety tests have been done on them.

“Yes, we are incredibly way behind. But you have to remember that we have to work under the context on very old laws. . . . We have to use the precautionary principle, but we don't have a law that requires it.” Peeler's point, echoed by many public health advocates at the meeting, is that their obligation is to keep chemicals out of the marketplace until they are proven safe, but U.S. law allows them to be sold until they are “proven guilty” — something that is especially tough when labels are incomplete and safety tests are not submitted.

Neither do the laws require companies to label nanoparticles as such. EPA is now developing regulations to increase reporting of products with nano Silver, nano Silicon and other nanoparticles, and is seeking what it dubs a data call-in of safety and health test data, under the antiquated 1976 Toxic Substances Control Act. EPA has received at least 90 new chemical notifications for all types of nanomaterials, and has proposed significant new use regulations for more than 50 chemicals.

Lynn Bergeson, a Washington attorney who represents businesses, financial institutions and others on toxics and nanotechnology matters, says she expects EPA to propose that businesses provide the agency with this information only for new products, and that those on the market would be grandfathered in. “My own view is EPA has demonstrated significant sensitivity to nanotechnology and has worked very hard to be mindful of [the technology's] promise,” says Bergeson, acknowledging that EPA's program to collect manufacturers' data on nanoparticles voluntarily was a flop. “Three times EPA said, 'If we don't get the information we need, we're going to go with a mandatory program' . . . You would truly need to be coming from the planet Jupiter if you didn't expect [mandatory regulation] to come out.”

At the end of the two-day workshop, EPA ended up with two questions that participants agreed were the most important: “Are current EPA standard testing protocols adequate to determine nano-TiO2 ecotoxicity?” and, “Are the current EPA harmonized health tests guidelines for assessing toxicity adequate to determine the health effects/toxicity of nano-TiO2?” Simply stated, the EPA needs to know if the agency is using satisfactory methods to detect or measure whether Nano-Tio2 is toxic to the environment or human health.

While the experts agree on the questions, they still have no answers.