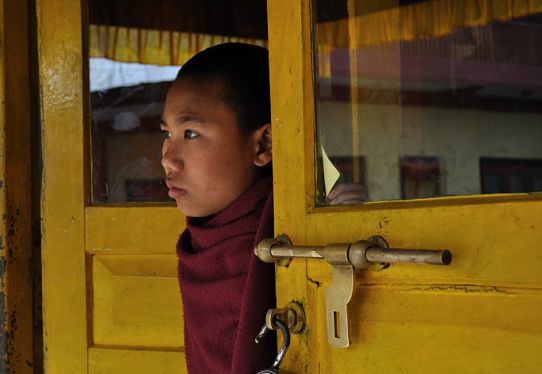 A young monk peers into the courtyard of the Tashiling Tibetan Refugee camp, near Pokhara, Nepal. | Credit: GREG BRUNO

In one corner of the Tashi Palkhel Tibetan nursery school here, giant alphabet cards gather dust near the chalkboard against the wall. On top of the refrigerator, a yellow toy truck sits idle. Puzzles, counting games, and action figures — worn from years of use — are ignored by the few students remaining in this tiny three-room school house.

It’s not that the nursery school in this moderate-sized refugee camp, 120 miles west of Kathmandu, is bursting at the seams with toys, or that the children remaining are reluctant to play. Instead, the inactivity is emblematic of larger trends sweeping Tibetan settlements across Nepal’s Himalayan mountain chain: lower birth rates, fewer marriages, and above all, a rush for the exits.

“Next two years, maybe we have to close the kindergarten because there just are not enough students,” says Pema Chodon, 39, who runs this camp’s all-Tibetan nursery school. “Due to fewer married people there are fewer children,” she says. “No future, no children.

Five decades ago, tens of thousands of Tibetan refugees fled Chinese-ruled Tibet, following their spiritual leader, the 14th Dalai Lama, into exile. Many went to India, where they were given refuge and land by New Delhi; some stayed here, in the then-Himalayan kingdom of Nepal, under a similar arrangement.

But as years turn into decades, exiles, advocates, and international observers say government instability in Nepal, along with increased economic uncertainty and heavy political pressure from China, is bearing down on one of the world’s most vulnerable populations.

Official numbers are hard to come by, but in more than two dozen interviews across Nepal in recent weeks, the story was the same: Tibetans are leaving the refuge they’ve called home since 1959.

The steep drop in student enrollment at camps like Tashi Palkhel — home to roughly 800 Tibetans refugees — tells the story. Since 1997, the number of children under 5 at the camp’s nursery has dropped 65 percent, according to camp records. Today there are just 30. At the nearby Tashi Ling Tibetan Settlement, which houses about 500 refugees, the number of school aged children has declined by nearly a tenth in the last two years.

But the biggest population slide, according to Yeshi Choedon, Tashi Ling’s secretary, is among men and women of marrying age. In the last three years, 14 percent of Tibetans at the smaller camp between 18 and 32 left the settlement, she said. Some headed south to India, though most went west, to the United States and Canada.

That Tibetans are leaving Nepal is not a uniquely Tibetan phenomenon. But the attention paid to the Tibetan exile community by China, a chief Nepalese benefactor and constant presence in Kathmandu’s political calculations, means Tibetans are increasingly vulnerable, experts say. As Nepal’s Tibetan population prepared to celebrate the 51st anniversary of their failed uprising against the People’s Republic of China last month, dozens of undocumented Tibetans were swept up in random raids, including one sweep that netted 13 as they ate noodles in a touristy section of town.

Western observers, none of whom would speak on the record about Tibetans in Nepal out of deference to China, say as long as Tibetans exiles here keep their heads down, they are genuinely left alone. But sensitive anniversaries like March 10 bring an increased police presence, advocates say.

Sudip Pathak, president of the Human Rights Organization of Nepal, and a former human rights commissioner in the Nepali government, says on the Tibetan refugee issue Kathmandu is caught between two giants. “The government always thinks that if I go anti-China, than I cannot rule in Nepal. If I go anti-India, I cannot rule in Nepal. This is a problem in the Nepali psychology.”

As recently as Feb. 28, a Chinese delegation toured Nepal’s eastern Dolakha district to wage a protest against an increase in Tibetan refugees crossing the border (17 had just slipped through). In February alone, more than 90 Tibetans were arrested and detained by police, according to tallies kept by Pathak’s group. Some had made the crossing from Tibet, some had entered from India (apparently after traveling there on pilgrimage), and others were long-time residents without proper papers.

The vast majority of Tibetans in Nepal — as many as three-quarters of the 30,000 Tibetans living here, according to some estimates — are undocumented and essentially illegal. Many are highly educated, but most born in the last two decades have no right to work or travel.

Advocates do acknowledge Nepal is only partially ceding to Chinese demands. While Tibetans may be vulnerable to arrest, they are often quickly released. Bans on political rallies notwithstanding, Tibetans are generally well respected among the Nepalese, who share similar cultural and religious backgrounds.

Even still, many Tibetans residing in Nepal see two choices for their future: grin and bear it, or try and leave.

At Tashi Palkhel, two kindergarten teachers left last year. An elderly shop keeper said her entire family — son, daughter-in-law and grandchildren — packed and left recently, leaving her alone. At nearby school Tashi Ling, the camp’s only health worker is slated to leave in the coming months, joining her husband in Toronto.

Among those who remain, greener pastures are the principal topic of discussion. During a recent visit to the two main settlements near Pokhara — the trekkers’ paradise in the heart of the Himalayas — interviews with a half-dozen Tibetans in the 20s revealed a variety of strategies for securing their exit.

Some, like Palmo, 28, plan to marry their way west. She met an American last year during his visit to Nepal, she says; they now talk and text daily. “I want to go to America, where my husband lives,” she said through an interpreter before quickly correcting herself. “Soon to be husband.”

Dawa, 26, said six of his 10 closest friends have already left Nepal. His aim is to join them as soon as possible. “We can’t live a life like this,” Dawa said sitting on his stoop beneath a hot afternoon sun. “We need to do something, because we have our families. We need to bring bread home to help our parents when they get old.”