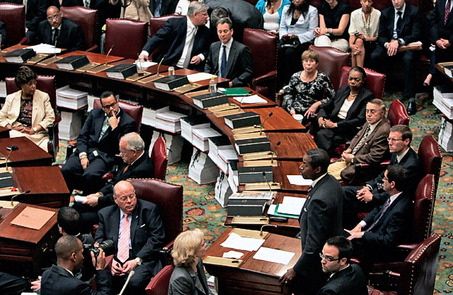 The New York State Senate, one half of the most dysfunctional legislature in the United States, was late to begin its deliberations on September 10 last year. “They’re still in conference,” said a sergeant at arms named Joe, a grim, red-nosed Korean War veteran whose job was to guard the gallery above the chamber, where the public is invited to enjoy the proceedings.

Joe appraised me, and I got the impression he thought I was none too bright. “Can’t get in,” he snapped. “Conferences are closed.”

“Well, can you guys get in?” I asked, nodding at Joe’s colleague, Frank (their names have been changed), who was as craggy and harrumphing as Joe. Both men had spent more than twenty years watching the legislators from their balcony. Frank shook his head no.

“But you’re sergeants at arms!” I protested.

I looked at my watch. “Is the senate always this late?” The senators were scheduled to meet in the chamber at 2:00 p.m. It was fast approaching three.

“Only when they get together,” said Joe.

“So what do they do in conference?”

The men shrugged. “Democracy. Debate. The meat. That’s supposed to be our right to know,” said Joe. “So we don’t know.”

Downstairs, outside the closed doors of the conference room, a group of thirty or so citizens, all red-shirted members of the Real Rent Reform Campaign, were yelling slogans in a screechy way that suggested they planned to storm the room and hurt somebody. Fight fight fight, housing is a right!, they shouted, and then, in Spanish, Tenants united will never be divided!

One of the protesters, a round-faced Guatemalan immigrant named Aura Mejia, who lives in Brooklyn, handed me a flyer when I started asking her questions. The flyer listed the bills the group was hoping the senate would pass that day in support of affordable housing in New York City. Mejia said she had had the luck earlier in the day to buttonhole Pedro Espada, the Democratic senator from the Bronx who had recently taken charge as majority leader. “I asked him, in Spanish, if he was going to support us, and he said yes,” she told me. “But you never know with him. He changes.”

I took this as a hilarious understatement, as Espada who won his seat after his predecessor was indicted on charges of mail fraud — had that summer jumped ship to the Republicans in what even for that chamber was one of the most embarrassing and embittering episodes in its history.

See the May 2010 issue of Harper’s Magazine for the full article.

Christopher Ketcham, a freelance writer, has written for Vanity Fair, Harper’s, The Nation, and Mother Jones, among others.