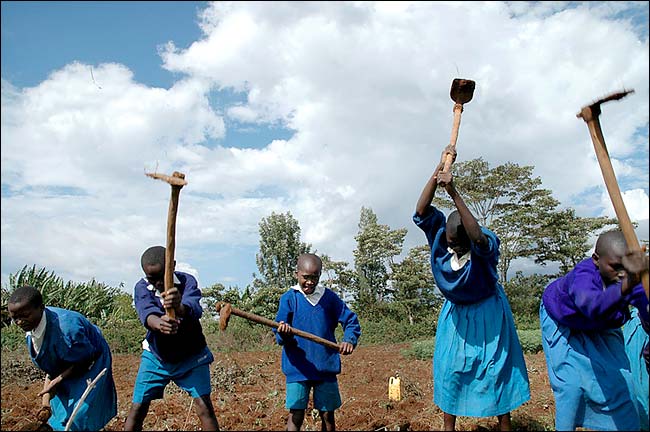 Students in Sauri, Kenya, till fields as part of the Millennium Village Project. | Credit: Guillaume Bonn

On an oppressively hot morning in January 2006, I set out in a rented car from Kisumu, an aging port city on the shores of Lake Victoria, to visit Sauri, a remote outcropping of farming villages in the northwestern corner of Kenya's Nyanza province. I was traveling to Sauri with a simple goal: to witness the beginning of the end of global poverty. The narrow two-lane highway to Sauri cuts a winding path through the region's abundant maize and sugarcane fields, from which I could just barely discern the outline of mud-and-thatch homesteads, connected by a jagged patchwork of red-dirt roads and footpaths. Old women balancing oversize buckets of water on their heads and men in dirty sports jackets riding bicycles saddled with 200-pound bags of maize gave way as my car sped by. Shirtless youths burdened by unwiedly loads of brush piled high atop their heads stared wordlessly as I passed, and when young children caught sight of me they yelled, sometimes in fear, sometimes in glee, “Mazunga! Mazunga!” (“White lady!”)

Sauri is actually a tight-knit constellation of eleven small hamlets with a total population of about 5,000 people. Most Saurians observe a mixture of Christianity and traditional Luo religion, which means they both revere the Bible and practice polygamy. Famous for their lyrical music and dance, the Luo are among the poorest ethnic groups in Kenya and have historically been discriminated against by the Kikuyus, the country's largest and most politically powerful tribe. The Luo are the largest tribal group in Nyanza province, an area where some 65 percent of the population lives in severe poverty, nearly a quarter of the children under hte age of five suffer from malnourishment, and 20 percent are orphans. This leaves Nyanza's Luo among the poorest in an already poor country: at least 50 percent of Kenya's 35 million people live below the poverty line; one out of ten children dies before age five, most of them from disease; more than 2 million people are infected with HIV; 2 million have died from complications related to HIV/AIDS.

Grim statistics such as these led economist Jeffrey Sachs — special adviser to from UN Secretary General Kofi Annan and director of Columbia University's Earth Institute — to choose Sauri as the location for the first research village of the Millennium Villages Project (MVP), an endeavor whose stated goal is to halve the number of people living on less than a dollar a day in sub-Saharan Africa by 2015. Sachs, named one of the hundred “Most Influential” peopel in the world by Time magazine in 2005 and best known professionally for his “shock therapy” approach to fixing the post-Communist economies of Russia and Poland, is also the author of the much lauded 2005 bestseller The End of Poverty (foreword by Bono). In the book, Sachs claims that hte world's intractable systemic poverty could be resolved, efficiently and quickly, via a package of inexpensive, scientifically based solutions, all for as little as $110 per person annually. Sachs founded the first Millennium Village in Sauri in 2004, and it has since expanded into eleven other research villages in ten African countries, plus an additional sixty-six villages that receive similar aid but are only monitored. Along with his colleagues at the Earth Institute, Sachs envisions the villages spreading across the entire African continent, creating “a scalable model for fighting poverty that can be expanded from the village to district level and eventually to additional countries.”

Read the rest of the article in the May 2007 issue of Harper's.

Victoria Schlesinger is an environmental, science and investigative reporter.