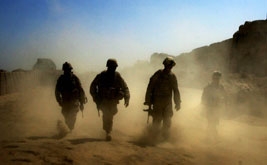 Security for key US military supply routes in Afghanistan is in the hands of a small group of powerful Afghan warlords who run a massive protection racket and may be paying off the Taliban, according to a congressional report being released Tuesday. The report, an advance copy of which was obtained by The Nation, discloses that the Army has opened a criminal investigation into the payoffs, as an Army Criminal Investigation Command spokesmanconfirmed this evening to the Associated Press.

The jarring report, called “Warlord, Inc.,” is the result of a six-month investigation prompted by a Nation cover story last November, “How the US Funds the Taliban,” about the largest US logistics contract in Afghanistan. Under that $2.16 billion contract, called Host Nation Trucking (HNT), the US Army has hired eight civilian trucking firms to transport supplies to a web of combat outposts and bases set up throughout Afghanistan. The Nation story, which was reported in conjunction with The Investigative Fund of The Nation Institute, described how US taxpayer dollars are being funneled into an elaborate system of extortion in Afghanistan as well-connected security firms made payoffs to warlords allied with insurgents for safe passage of US military goods.

In the HNT contract, firms pay for their own private security, with little oversight from the US government. The report by the Subcommittee on National Security and Foreign Affairs says the resulting system promotes corruption and strengthens warlords — while the US military looks on. The contract “fuels warlordism, extortion, and corruption,” the report asserts, “and it may be a significant source of funding for insurgents. “When HNT contractors self-reported to the military that they were being extorted by warlords for protection payments for safe passage and that these payments were ‘funding the insurgency,’ they were largely met with indifference and inaction,” the report adds. Among the most significant findings in the report: “security for the US supply chain is principally provided by warlords”; “the highway warlords run a protection racket”; and “protection payments for safe passage are a significant source of funding for the Taliban.”

“It’s outrageous that this is going on,” said Congressman John Tierney, chairman of the subcommittee, in an interview with The Nation. “The evidence indicates a protection racket that would make Tony Soprano proud.”

Committee investigators obtained emails and documents in which US contractors repeatedly warned the US military that they were paying bribes and being extorted, and that US taxpayer funds might be going to the Taliban.

In 2009, a contractor wrote frankly to military officers, “It is believed [that certain funds] are being paid as bribes to local Commanders, and therefore inevitably to the enemy.” In another case, a contractor wrote in an internal company memo of a meeting with the military where there was discussion of “funding the insurgency” with “what is estimated at 1.6 – 2 million Dollars per week.”

In one email the subcommittee obtained, a US contractor shares explicit details with the military logistics headquarters at Bagram, writing that “the current price to the Taliban is $500 per truck from Kandahar to Herat, $50 from Kabul to Ghazni.” The contractor complains that “if we make payment that money will be funneled back into their fight against the Coalition.”

Driving home how much influence the warlords now have, the report includes a contractor’s printed list of forty-four military supply routes, each apparently controlled by one of ten warlords. The subcommittee report compares it to a “prix fixe menu” for security.

Committee staff interviewed one key warlord, Commander Ruhullah, who was first identified in the Nation article, calling him “the single largest security provider for the U.S. supply chain in Afghanistan.” The report says Ruhullah, nicknamed “The Butcher” by villagers along his route, has a private army of 600 armed guards. “Despite this critical and sensitive role,” the report says, underlining the chaotic nature of Afghan security, “nobody from the Department of Defense or the U.S. intelligence community has ever met with him (except for a brief detention by U.S. Special Forces on what he says are false drug charges).”

As The Nation had previously reported, Ruhullah operated with a private security company called Watan Risk, which is owned by Ahmad Rateb Popal and Rashid Popal. Both men are cousins of Afghanistan’s President Hamid Karzai, and both have old convictions for federal heroin charges in the United States.

According to the report, Ruhullah denied bribing the Taliban, but admitted he paid bribes to “governors, police chiefs, and army generals.” He said he guarded 3,500 trucks per month, charging up to $1,500 a truck, a fee that ultimately comes from US taxpayers.

The committee report found that Department of Defense oversight of the multi-billion dollar contract was “virtually non-existent.” The officer in charge of the technical contract oversight told committee staff that his unit had “zero visibility” over the subcontractors who actually did the work bringing supplies to various US bases and outposts.

One lieutenant colonel to whom contractors had complained told the committee that he couldn’t have investigated. “That was way, way, way, way above my level,” he said, “my job was to get barrels of insulating foam for tents out to Dwyer so Marines didn’t suffocate from heat exhaustion.”

While the military unit that oversaw the contract treated the allegations with “indifference,” according to the subcommittee, there was a criminal investigation launched. The subcommittee released a PowerPoint from the Criminal Investigation Command-Afghanistan entitled “Host Nation Trucking. Payments to Insurgents.” Most of the slides have been redacted. In one email cited by the committee, dated December 2009, a military commander says “We had the FBI, CIA, CID and 3 or 4 other acronym agencies in the office to work this topic.”