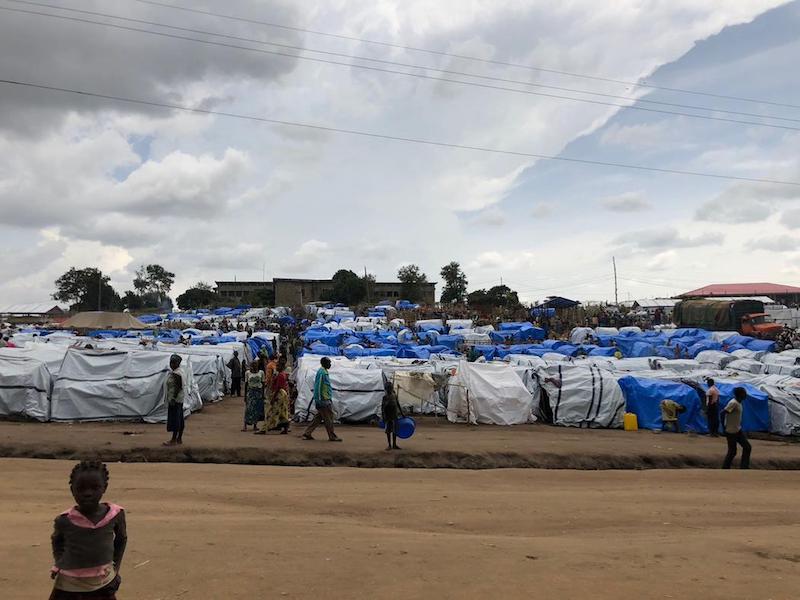 The camp for internally displaced persons in the town of Bunia, Congo. The settlement has grown exponentially in recent weeks as tens of thousands have been driven from their homes by violence in the nearby countryside. Image: Nick Turse/VICE News

BUNIA, Democratic Republic of Congo — “Why are you cutting me? Forgive me! Have mercy!”

Alphonsine Njededa, a woman in her 70s, was lying on a bed in a darkened one room hospital ward when she recounted the attack on her village less than two weeks earlier.

Njededa screamed as the militiaman slashed at her with a machete. The strikes from the blade were so powerful, one not only cut through her flesh but broke her right arm. Another severed a finger from her left hand, others cut gashes into the top of her head. Her face bears a ruler-straight scar from where she was shot with an arrow as the attack commenced.

Across the room sat another victim, glassy-eyed and traumatized. She spoke in a whisper and could only manage a few words. These women survived an attack on the village of Rule, which may have killed close to 50 civilians, a local activist told VICE News.

In recent weeks, a wave of armed assaults has spread across Djugu territory in Ituri Province, in the east of this nation, emptying whole villages. While the overall death toll is uncertain, there is reason to believe it may reach into the hundreds; witnesses and activists said that 34 villages had been attacked. Since December, an estimated 150,000 people have fled their homes, according to humanitarian workers in the region.

The killings resemble the early stages of an ethnic cleansing campaign directed at members of the Hema ethnic community here. The details of this of violence have not been previously reported.

VICE News spoke with more than 80 people in the Democratic Republic of Congo’s Ituri Province, including government officials, activists, community leaders and, overwhelmingly, displaced people. Those conversations reveal evidence of a targeted campaign against the Hema community, which has driven tens of thousands from their homes.

The victims, overwhelmingly ethnic Hemas and more than 20 of them severely wounded, told VICE News of raids by ethnic Lendu men armed with machetes, bows and arrows, axes, and in fewer cases firearms. They reported killings of the elderly, children, and even infants. Some local Hema activists suggest that up to 85 percent of Hema people from the Djugu region have been made homeless by the attacks or fear of them.

The president of the Hema community’s cultural association, Hadji Ruhingwa Bamaraki raised the specter of something even worse. “This may be genocide,” he told Vice News. “The government should tell us why Hema are being killed.”

A recent attack on the village of Maze (“Moz-A”), about 50 miles north of Bunia, Ituri’s provincial capitol, left around 50 people dead — including women and children — many of them killed by machete, some of them decapitated or sexually mutilated according to witnesses interviewed by VICE News.

While the death toll from these attacks remains unknown, the resulting displacement has been immense. Between March 3-5, alone, 2,043 Congolese fled to neighboring Uganda, bringing the total for the year to 48,105, according to figures provided by UNHCR, the UN Refugee Agency. Some 27,706 of them fled Ituri Province and entered Uganda across Lake Albert using fishing boats, canoes, and other watercraft.

An even larger number of Congolese from Djugu territory have been displaced inside their own country. Thousands of houses have been burned since December 2017, according to the Congo Research Group, a U.S.-based organization.

Low-level violence began late last year before erupting last month, catching civilians off guard and leaving most to only speculate at the motives of the nascent campaign. But with every development, the dimensions of this conflict become clearer and suggest a concerted attempt to use violence and intimidation to drive Hema from Djugu, leaving the Lendu ethnic community in place.

Violence, Past and Present
For many living in the region, the fresh outbreak of violence sparks painful memories of a 1998-2003 “ethnic” war between Lendu and Hema, part of a series of conflicts all across eastern Congo that left millions dead from violence, hunger, and disease. Three warlords from Ituri Province were eventually tried by the International Criminal Court — two were convicted — for their roles in those previous conflicts. Another is currently on trial for both war crimes and crimes against humanity.

That earlier conflict, which also began in the Djugu region, saw battles between Hema cattle herders and Lendu farmers over land and regional authority. Prior violence between the two ethnic groups in 1972, 1985, and 1996 was also linked to property disputes and land rights and led to burned villages and displacement. Since the early 2000s, however, the groups have coexisted peacefully, with localized disputes kept under control. Hema victims of the current unrest are left wondering why the attacks have started now.

Some analysts, local politicians, and members of the Congolese military have claimed that the recent violence is similar in nature to the earlier ethnic conflict. But leaders of the Hema and Lendu communities dispute this and classify the unrest as political in nature, pointing to unseen politico-military forces who are either stoking or at least failing to prevent the attacks.

The Dispossessed
Alphonsine Njededa had already fled from her home village of Angolou when armed men stormed the community and began burning houses. She sought safety in Rule, another Hema village, only to face similar violence by attackers whom she that identified through their dialect as Lendu.

Njedada’s plight was similar to what other survivors told VICE News. Dozens said they were displaced multiple times, running from one village due to an attack, only to be forced to flee again when violence crept closer. 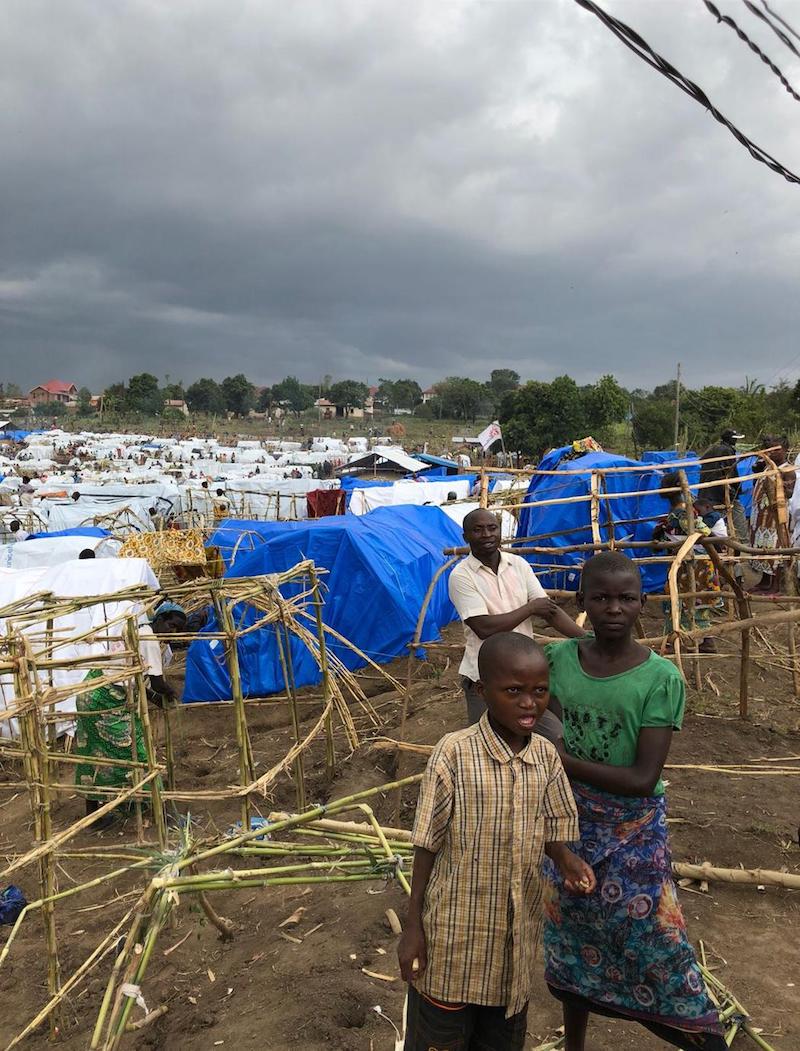 Congolese build rudimentary homes at a rapidly expanding camp for displaced people in Bunia, Democratic Republic of Congo. Many arrive with only the clothes on their backs having been driven from their homes by sudden militia attacks.Image: Nick Turse/VICE News

Many of the homeless also report having few options when it comes to finding safety. According to the Catholic relief agency Caritas, 25,000 people with no belongings and in need of food, water, shelter and protection are estimated to be displaced in Mahagi Territory, the site of Lake Albert.

Lisinga Gerare, a 57-year-old charcoal maker, says his village on Lake Albert known as Songamaya or to locals “Uu” was attacked and burned in February. “There were many dead people. There were bodies scattered throughout the village and some floating in the water,” he said. “They used pangas and shot arrows.”

Many residents, he said, fled to Uganda, but a lack of boats forced some like him to run a dangerous gauntlet, skirting Lendu villages on their way to safety elsewhere in Congo.

Badly injured by machete-wielding militiamen he identified as Lendus, Gerare told VICE News that he swam and walked for days, traveling at night to avoid detection, in an effort to reach the safety of his family’s home in the village of Dhendro. On arrival he found the community had largely been burned to the ground, including his brother’s house. He eventually found survivors of the attack, including his brother, hiding in the bush for fear of follow-up raids. Gerare eventually reached Bunia, where more than 61,000 internally displaced persons (IDPs) are now registered, according to local authorities.

Thousands carry similar stories of attacks on their own villages or nearby communities with them to the camp, now growing at an exponential rate. Still, roughly 30,000 more are living in the nearby town Iga Barrière (“Eeega Bariere”) where small houses host up to 40 people, according to one local official who spoke to VICE News on condition of anonymity.

The Invisible Hand
These spikes in violence and displacement come as President Joseph Kabila struggles to maintain power at a time when protests have repeatedly shaken the capital, Kinshasa, roughly 2,000 miles by road from the violence in Ituri.

And across the country, upheaval looms. An estimated 13.1 million people in the country are now in need of humanitarian assistance.

Like Ituri, other Eastern provinces including Tanganyika, South Kivu, and North Kivu have been convulsed with various types of violence, including separate ethnic conflicts and battles between the Congolese military, local militias, and other armed groups.

Several activists and analysts told VICE News that it’s likely not a coincidence. Some believe the national government is promoting, or at least ignoring, violence in Ituri as a way to keep President Joseph Kabila in power beyond the legal limit of his presidential term, which ended two years ago. Many point to a recent statement by Corneille Nangaa, the head of the electoral commission, that violence in Ituri’s Djugu territory could prevent the government from holding polls currently scheduled for December. The government disputes this notion and contends that the violence is linked to lingering tensions from the previous Hema-Lendu conflict.

There have been reprisals against Lendu civilians, including reports of retaliatory raids on Lendu villages by Hema militias, but the extent of that violence is unclear. Unconfirmed reports indicate, for example, a Hema raid on the village of Tete.

Ndjaza Linde, the vice-president of the Lendu community’s cultural association, told Vice News that at least 13 Lendus were killed in the village of Nizi and another two in Jiba. He said that the campaign of attacks on Hema villages could have been carried out by Lendu extremists, but strongly denied his community’s involvement in the cleansing of the Hema population from Djugu.

“This war is not our war. This has been imposed on us by an invisible hand,” he said.