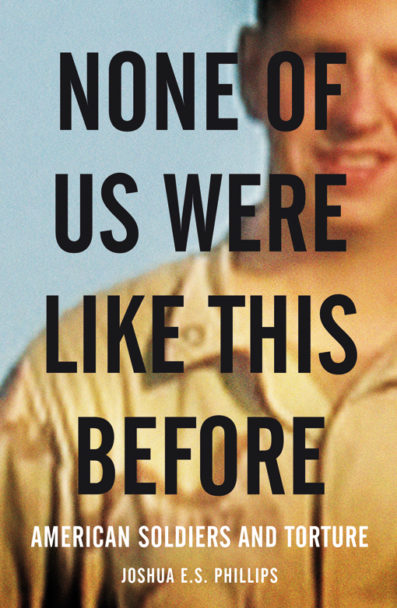 None of Us Were Like This Before: American Soldiers and Torture (2010) by Joshua E. S. Phillips

Sergeant Adam Gray made it home from Iraq only to die in his barracks. For more than three years, reporter Joshua E. S. Phillips — with the support of Adam’s mother and several of his Army buddies — investigated Adam’s death. What Phillips uncovered was a story of American veterans psychologically scarred by the abuse they had meted out to Iraqi prisoners.

How did US forces turn to torture? Phillips’s narrative recounts the journey of a tank battalion — trained for conventional combat — as its focus switches to guerrilla war and prisoner detention. It tells of how a group of ordinary soldiers, ill trained for the responsibilities foisted upon them, descended into the degradation of abuse. The location is far from CIA prisons and Guantanamo, but the story captures the use and nature of detainee abuse in the US armed forces that was once widespread.

Based on firsthand reporting from the Middle East, as well as interviews with soldiers, their families and friends, military officials, and the victims of torture, None of Us Were Like This Before reveals how soldiers, senior officials, and the US public came to believe that torture was both effective and necessary. The book illustrates that the damaging legacy of torture is not only borne by the detainees, but also by American soldiers and the country to which they’ve returned.

Praise for None of Us Were Like This Before:

“This shattering book is a journey into the heart of American darkness. What Joshua Phillips makes shockingly clear is that the misbehavior of some of our best soldiers in Iraq and Afghanistan came about because of a failure of military leadership and because political leaders lacked the courage to admit the word ‘torture’.”
— Richard Rodriguez, author of Brown: The Last Discovery of America

“Phillips’ None of Us Were Like This Before is a model of conscientious reporting on a volatile subject — the torture of Iraqi prisoners by American soldiers. His ethical and compassionate approach is an act of citizenship.”
— Barry Lopez, author of Arctic Dreams and Crossing Open Ground

Joshua Phillips was interviewed by Scott Horton on Harper’s online when his book came out in 2010.

Scott Horton: You tracked down other soldiers of Battalion 1-68 who were deployed at FOB Lion and corroborated the accounts of torture, and one of them described using a technique of simulated drowning similar to waterboarding — which the U.S. Government has insisted was practiced only by the CIA and only in three cases. Describe this account and how you came by it.

Josh Phillips: It’s true. Prisoner abuse and torture was far more widespread than most people understand. It happened well beyond the walls of Guantánamo, Abu Ghraib, and CIA “black sites.” Prisoners were seriously abused in other U.S. military bases and facilities in Iraq and Afghanistan.

Some soldiers with Battalion 1-68 told me about an episode that involved choking a detainee with water. No one referred to it as “waterboarding” at the time, nor did anyone reference official memos that sanctioned such techniques. One soldier from Battalion 1-68 said the idea was borne out of casual discussions on the base about torture techniques that had been used elsewhere. In this case, a non-commissioned officer referenced a kind of water torture that had been used in Vietnam. (There are various water torture techniques — “waterboarding” represents only one method — and, in fact, there are accounts that some American MPs used water to choke Vietnamese prisoners.) This soldier from Battalion 1-68 told me that he and others tried to reproduce the technique — not to gain intelligence but because it was understood that torture and abuse were permissible. Naturally, the military and Bush Administration officials approved certain techniques for so-called “harsh interrogation.” But there were other ways in which ideas took root and spread. The experience of select troops from Battalion 1-68 using water torture illustrates how soldiers picked up techniques in the field. The origins of these techniques are often quite banal. Soldiers would draw on what they had done during their training (e.g., exercises from basic training), what was available (e.g., a boom box for sleep deprivation), and what they remembered or heard about from others (such as the water choking reference from Vietnam). Those who study torture say this is often how torture techniques are picked up and travel from conflict to conflict.

The soldiers from Battalion 1-68 who engaged in water torture maintain that even if this specific technique was not ordered, they could not have turned to abuse on their own. Like most American soldiers, they served with honor and bravery in dangerous, high-pressure conditions. These troops from Battalion 1-68 said abuse and torture was sometimes ordered or encouraged for detentions and interrogations. In other cases they said it was ignored or allowed to continue. The encouragement of abuse, and the impunity for it, set conditions that enabled troops to use water torture.

What role do you think popular culture played in the spread of specific torture techniques?

When I began doing research for the book, I thought that popular culture helped spread the use of particular torture techniques. Several of my military sources believed that might have been the case. I later understood that the larger effect of popular myths, folklore, and fiction was in promoting the idea that torture could (and should) be used to gain actionable intelligence. Military interrogators, officers, and West Point instructors told me how they feared that powerful torture scenes on TV and in movies (as well as in literature) encouraged beliefs in the utility of torture.

Hollywood interrogation scenes often show high-pressure situations where interrogators eventually get a suspect to “crack” when they finally resort to physical force. Such scenes show how prisoners quickly succumb to torture, and provide truthful, accurate, and actionable intelligence. Even though these are fictional depictions, they’re powerful and dramatic and have shaped public perceptions about how interrogations ought to work, and how torture is a necessary and effective tool.

Some interrogators said they felt that such folklore and fiction had an especially strong impact on military personnel who hadn’t received much instruction and coaching for interrogation. As interrogators explained it, when they and their peers faced frustrating systemic problems with interrogation that impeded them from producing intelligence, the vivid success stories on TV looked like an attractive alternative for questioning prisoners. As it turned out, ticking time-bomb scenes not only affected troops in the field but also influenced some of Guantanamo’s staff, officer cadets, and senior government officials.