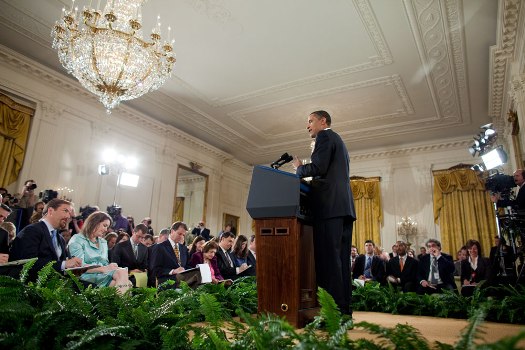 President Barack Obama speaks at a press conference on the H1N1 flu virus in the East Room of the White House, April 2009 | Credit: PETE SOUZA

On March 4, President Obama sat behind his stout oak desk, flanked by beaming lawmakers, and, wielding a pen for the cameras, signed the Travel Promotion Act into law. Just a routine White House moment, right?

Maybe not. The images from which I — and others in the press — recreated that scene were captured by government employees. The White House released a photo to the world and produced a slick video that would have looked right at home on the evening news. No journalist was present for the bill signing because none were invited.

The bill, which passed Congress with overwhelming bipartisan support, had the anodyne goal of luring foreign tourist dollars to these shores. Not so controversial. But the ceremony was just one recent example of an unsettling trend of limiting press access to major events at the White House, from the Dalai Lama’s visit to the odd do-over of Obama’s flubbed attempt to take the oath of office.

Despite the administration’s trumpeting of its record on transparency — not to mention its use of the issue as a campaign cudgel — on the whole reporters have found this White House to be no different than the Bush administration (or any other recent administration) when it comes to providing information or being accessible to the press. “By and large, they’re just like all of their predecessors,” says CBS Radio correspondent Mark Knoller, who has covered every president since Gerald Ford. “They give us information that serves their interests more than our interests.”

Message control is central to every administration, and it would have been naïve to expect much else. But the Obama White House has actually regressed in some troubling ways. For instance, Obama has been far less available for questioning by journalists than even President Bush, who was openly contemptuous of the press. And accommodations on off-the-record background briefings and White House photo releases — both forged in the wake of significant press failures in the run-up to the Iraq war — have eroded since Obama took office.

Photo releases, where shots taken by the official White House photographer are offered to news outlets, are nothing new. But photojournalists have long been irked when such photos are the only images of an event that could have easily been made public. In 2005, after an increase in presidential events from which they were excluded, the White House News Photographers Association allied with other press organizations and successfully pressed the Bush White House to routinely allow photographers back in. “We won the access under the Bush administration, and it has been taken away under the Obama administration,” says Ron Sachs, who chairs the association’s advocacy committee. He pointed to a series of recent incidents, including the decision to bar photographers from Obama’s February 18 meeting with the Dalai Lama in favor of releasing a single, no-smiles still taken by Pete Souza, the official White House photographer.

It wouldn’t take much to let the photographic pool into the room for half a minute, thereby producing dozens of shots for editors to choose from. Instead, the only record of official White House business is often a single frame, curated by the president’s staff in accordance with the administration’s message of the day.

Message control is enhanced by eliminating instances when the president is forced to answer inconvenient questions — and possibly provide inconvenient answers. Remember the very real national distraction that ensued after Obama suggested at a July 2009 press conference that the Cambridge, Massachusetts, police had “stupidly” arrested Harvard professor Henry Louis Gates Jr. at his home? That was Obama’s last formal press conference after a remarkable opening string. In February, shortly after The Washington Post and The New York Times published pieces pointing out the drought, Obama made a surprise half-hour visit to the briefing room. Besides that, he went without a White House press conference until late May — 309 days.

For White House reporters the absence of informal opportunities to question the president is at least as galling as the dearth of formal sessions. Richard Stevenson, who covered the Bush administration for The New York Times, says it was routine for reporters to be allowed to ask the president questions — often several times a week — when they were ushered into the Oval Office for quick pool sprays or in other less regimented settings. “It wasn’t an extensive give-and-take, but he did take questions quite frequently,” says Stevenson, now the paper’s deputy Washington bureau chief. “Obama has almost completely stopped doing that.”

Some reporters credit the Obama administration with increasing access to certain subject-area experts. But often these background briefings — and others with White House staffers — come on the condition that the briefers can only be quoted as a “senior administration official” or some equally vague attribution. Here again, progress under the Bush administration has been rolled back under Obama. Controversy surrounding off-the-record sourcing before the Iraq war prompted news organizations to protest to the Bush administration about the frequent demands that background briefings be anonymous, and the innocuousness of some of the information conveyed this way. “They got the message, and for most of the briefings we would be able to quote people by name,” says Caren Bohan, an officer in the White House Correspondents Association who has covered both administrations.

But Obama’s handlers discarded the Bush-era détente. Print reporters have been particularly outraged by incidents in which background briefers went on cable news to deliver the same information, faces before the world, minutes after the background sessions.

To protest the White House’s briefing policy, Stevenson and Ron Fournier of The Associated Press organized a sign-on letter from many Washington editors and bureau chiefs in May 2009. The White House responded and agreed to put more of the sessions on the record. While the situation has improved from the journalists’ point of view, readers still regularly find the administration’s line coming from unnamed sources. “There’s at least movement in the right direction,” says Stevenson. “It still is a problem. But the blatant instances where the only person who doesn’t know the identity of the briefer is the reader have been reduced — but not anywhere close to eliminated.”

None of this is the stuff of Nixon’s Enemies List. But the changes have to be understood in the context of the administration’s increasing use of online media to effectively create the White House’s own internal news organization. It is a matter of evolution and degree. This is not the first White House to e-mail its press releases to the public. But it is the first to press back against news articles on its blog and via its press officials’ Twitter feeds, to use such venues to break news, and to regularly broadcast its own video Q&A sessions, moderated by government employees, on its own Web sites.

No one expects the White House to ignore these new tools for communicating with the country. And there’s nothing inherently wrong with the White House setting up online interactions between the president and the American people — it is this very digital intimacy that fueled Obama’s successful grassroots campaign, and it was predicted that, once in office, it would help the president explain his policies and rally the nation.

But from the perspective of ensuring that an independent press can do its job, it’s important to understand what these new communication strategies have allowed the White House to do. Take the matter of who gets to photograph official White House events. In 2005, when the issue came to a head, the AP could refuse to distribute the official White House photo of an event, giving the press considerable leverage with the Bush administration in making its case for access.

But that leverage is gone. The Obama White House has its own Flickr feed — a de facto wire service — from which anyone can pull Pete Souza’s official photos. (The economic crisis facing journalism isn’t helping the situation, as Newsweek, for instance, has left the White House photo pool, and relies more and more on the White House handout photos.)

Or consider how, when pressed by journalists on the diminished opportunities to question the president, the administration points to the array of Q&A sessions available online in which the president has interacted with citizens.

Though he meant it pejoratively, George W. Bush was right: the press does filter the administration’s message on its way to the American people. At its best — and let’s stipulate that both the White House and Washington press corps often fall short of our ideals — that press filter knocks down egregious spin and outright falsehoods, challenges the administration narrative, and provides important context.

That crucial job is made more difficult when the White House can bypass the press corps and at the same time limit its access to the president and other decision-makers. Finding new ways for our government to communicate with citizens is laudable, and even good for democracy. But it should not — and need not — come at the expense of a free and unfettered fourth estate.

Please also see Clint Hendler‘s earlier, related story: “Report Card: Omama‘s marks at Transparency U.“ Research support for that story and this one was provided by The Investigative Fund at The Nation Institute, now known as Type Investigations.

Clint Hendler is the managing editor of Mother Jones.