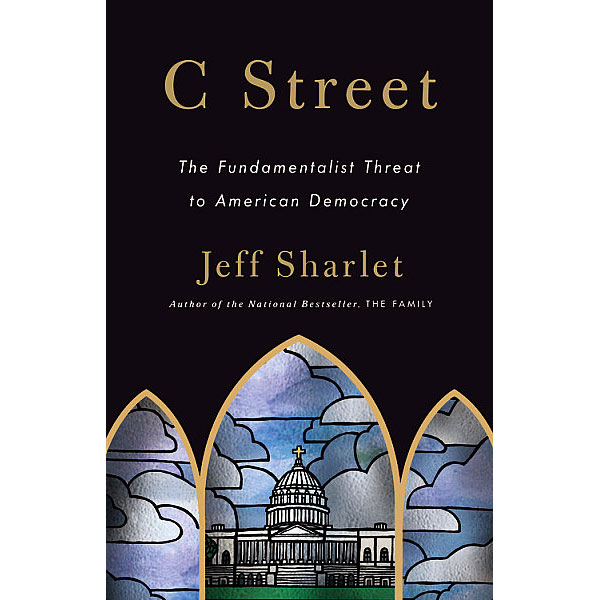 Jeff Sharlet is the only journalist to have reported from inside the C Street House, the Fellowship residence known simply by its Washington, DC address. The house has lately been the scene of notorious political scandal, but more crucially it is home to efforts to transform the very fabric of American democracy. And now, after laying bare its tenants’ past in The Family, Sharlet reports from deep within fundamentalism in today’s world, revealing that the previous efforts of religious fundamentalists in America pale in comparison with their long-term ambitions.

When Barack Obama entered the White House, headlines declared the age of culture wars over. In C Street, Sharlet shows why these conflicts endure and why they matter now — from the sensationalism of Washington sex scandals to fundamentalism’s long shadow in Africa, where Ugandan culture warriors determined to eradicate homosexuality have set genocide on simmer.

We’ve reached a point where piety and corruption are not at odds but one and the same. Reporting with exclusive sources and explosive documents from C Street, the war on gays in Uganda, and the battle for the soul of America’s armed forces — waged by a 15,000-strong movement of officers intent on reclaiming territory for Christ in the military — Sharlet reveals not the last gasp of old-time religion but the new front lines of fundamentalism.

Jeff Sharlet was on NPR’s Fresh Air with Terry Gross to discuss C Street on September 23, 2010. Click here to listen online or to download a podcast.

On Christianity and the military: “I should say the vast majority of the military personnel understand their oath to the Constitution and understand why they’re there and their duty. But there is a very significant movement within [the military] which sees the military as a Christian institution. They seem themselves as Christian warriors. They see themselves as responsible for protecting and defending America’s tradition as a Christian nation and representing that overseas. For a lot of them personally, it just meshed well with their personal beliefs because they didn’t have to engage in these kind of culture war issues and the military just decided for them. That decision comes down on terms that are very comfortable for religious conservatism.”

On the ability of the “Christian warriors” in the military to influence “don’t ask, don’t tell”: “There’s an organization called Officers for Christian Fellowship. [It has] 15,000 members and they’re officers includes many top ranking generals and former general and admirals. They define their mission as reclaiming territory for the Christ in the military [and] not allowing the opposition, all of which is spearheaded by Satan, to stand in the way. That’s from their mission statement of what they’re doing. They even refer to military personnel who may be Christian but not saved — not Evangelical — as unwittingly doing the work of the enemy, of spiritual terrorists. And we’re talking about folks like Gen. Bob Caslen, a senior commander [and] Gen. Robert Van Antwerp, another senior commander. So when you have that level of command committed to these ideas, committed to the idea that the military exists to embody their understanding of Christian values, it’s not surprising that they can exert a force or a political influence that even a lot of the officers find difficult to resist.”

On accrediting chaplains: “There was a great withdrawal of chaplains from the old mainline Protestant denominations — the Episcopalians and the Methodists and the traditional Presbyterians who were leaving in a large part. That was a legacy of the Vietnam War and there was a shortage of chaplains. So the military, through no attempt to create this fundamentalist movement, started really radically broadening the accrediting agencies it recognized chaplains from. So Bible colleges where instead of learning about all different faiths and how to minister to groups of all different faiths, you learn that there’s a right way of Christianity (‘my Christianity’) and a wrong way (everything else.) Suddenly those people started infusing the military. And they started lifting regulations that said ‘Well, you have 10 percent [of people in the military who are practicing] Presbyterians, you should have roughly 10 percent Presbyterian chaplains.’ That doesn’t mean you get a Presbyterian chaplain but you know they’re out there. That’s all gone. And now we’ve reached a point where according to one chaplain about 80 percent of the chaplains describe themselves as conservative or Evangelical.”