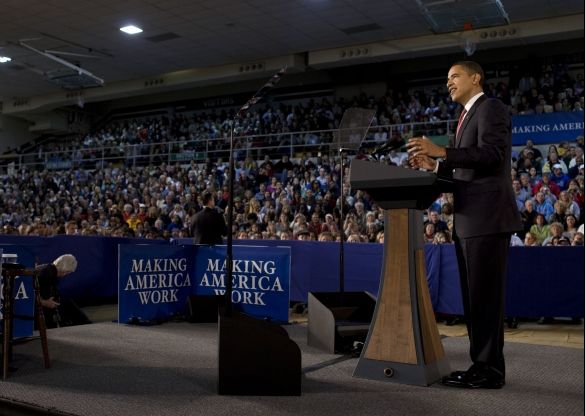 As President Obama heads to foreclosure-pocked Phoenix this week to announce his administration’s plans to help mortgage borrowers crushed by debt stay in their houses, a lot of suffering homeowners are asking what took him so long. The number of them doomed to foreclosure is growing so fast that Credit Suisse had to revise its projections twice in 2008. Its analysts now predict that some 8.1 million homes will meet that fate by 2012—an astounding one in six of all households with mortgages.

Yet so far only a teeny bunch of homeowners—a few thousand IndyMac borrowers, under the ministrations of the FDIC as their government caretaker—has received any financial assistance from the federal government, even as the Treasury and Federal Reserve unleash trillions of dollars to keep banks and the economy afloat.

You might think that straightening out a $400,000 mortgage would be massively simpler than righting sinking financial institutions nominally worth billions. Yet rescuing homeowners could turn out to be among the toughest bailout challenges of all. While the bank aid seeks to make sure institutions have enough capital to stay in business, a humble home mortgage involves (let’s keep this simple for a moment) a pact between two parties—the borrower and the lender. In good times, both borrowers and lenders gain by sticking with the agreement. In these very, very bad ones, borrowers and lenders are locked in a conflict over who gets to hold on to the benefits they signed up to get—for the homeowner, to keep the property deed, and for the lender, to collect every penny the borrower pledged to pay back.

The Obama administration’s task is to build borrowers and their creditors a fleet of seaworthy rowboats that will escort all to safety together using a very small amount of wood—just $50 billion or so, or about $6,000 for each of those doomed homes, many of which are saddled with more than one mortgage.

Over the past year or so, lenders and borrowers have been attempting to do exactly this on their own, without federal assistance, via what are known as loan modifications—new agreements determining how much borrowers have to pay and when. The results of these loan mods have, with few exceptions, been awful. Federal banking regulators recently reported that of the mortgages modified at the beginning of 2008, more than half were headed to foreclosure again within six months. Loan mods made later in the year were on track to do even worse.

What most loan mods have done so far is dig homeowners even deeper into debt. Alan White of Valparaiso Law School, who reviewed data reflecting several million recent loan mods on high-risk mortgages, estimates that they’ve been adding $1 billion more every month to the already high total of what the nation’s borrowers owe.

As described by administration officials, the Obama homeowner bailout will help borrowers evade foreclosure by making it financially attractive for lenders to lower mortgage bills more aggressively than they are now willing or able to do. Borrowers won’t need to prove financial hardship or even be behind in their payments—currently typical requirements for getting a loan mod. What they will need to do is subject their households and their homes to a rigorous evaluation of their economic value, exactly the kind of scrutiny so sorely missing during the bubble.

The Obama plan (subject to last-minute changes) will focus on bringing monthly payments down significantly, to as little as 31 percent of household income. If it can accomplish that without plunging borrowers more deeply into debt, it won’t just have succeeded in preventing needless foreclosures; it will have defied gravity. The basic math of mortgages is quite impervious to change. On a 30-year mortgage, a lender can either make loans cheaper to pay every month or cost less over their lifetimes. It’s not possible to do both without significantly reducing the principal owed, and $50 billion is far from enough to accomplish that feat.

Instead, the Obama homeowner bailout is expected to use government funds to supplement homeowners’ monthly payments—in the short term, a lifeline not only for homeowners, but for financial institutions, pension funds, and other stakeholders facing insolvency because their mortgage-related holdings have plummeted in value.

Then what? That’s where the picture gets gloomier. The tricks loan mods have been using to keep borrowers out of foreclosure are variations on the acrobatics lenders used during the bubble to shove customers into unpayable mortgages. A loan mod might forestall payments for a few months, then add the amount that didn’t get paid to the final years of the mortgage. Or it could reduce interest rates by a few points temporarily—but sooner or later, that interest rate must rise back up and the borrower must pay off the remaining balance as if he or she had been paying the full interest rate all along. If that sounds like an Option ARM to you, you’re catching on—many of these loans are in a state of “negative amortization,” in which the total amount owed grows instead of shrinking over time. Sooner or later—sooner, if one hopes to be able to sell the house—the total comes due. The bailout will undoubtedly lower that shocker of a final bill, but the government’s funds can only stretch so far.

Borrowers typically negotiate their loan mods via servicers, companies hired by the bankers in charge of mortgage-backed securities pools to keep the payments in every month. It’s no accident that loan mods have so far not been friendly to borrowers. Most of the mortgages now in trouble were split among a great many investors, each of whom was assigned a place in line to collect payments from borrowers as they rolled in. Those due to be paid in the near future may have reason to cheer for a loan mod, since temporarily lowering monthly payments means that a borrower stands a better chance of continuing to pay the bills over the coming couple of years.

The problem is the high-risk shareowners at the back of the line, whose income depends on borrowers’ payments flowing in for years to come. In many cases these “subordinate” parts of the securities pools ended up repackaged into those high-yielding derivatives known as collateralized debt obligations, purchased largely by investors—like local governments, pension funds, and financial institutions—for whom any further financial losses promise grievous larger repercussions. Any significant shrinkage in the total amount of principal and interest owed over the life of a mortgage cuts off their expected cash flow. Loan servicers have been trying to do the impossible: guarantee on paper, if not in reality, that every investor in the securities will get fully compensated in the end.

Even the best-case scenarios for loan modifications are looking lousy. Among the possibilities Credit Suisse looked at recently was one in which seven in 10 borrowers get a loan modification and only 20 percent of those end up heading into foreclosure again. The volume of anticipated foreclosures would be reduced only by half.

And realistically the number of borrowers likely to qualify for the new aid will be far lower. Millions of speculators lied on their mortgage paperwork in order to get the cheaper and looser mortgages available to homeowners, and it’s doubtful most will want to hang on to their property even if the feds are willing to help them. Among actual homeowners, spiking unemployment—some of the worst of it in the same bubble areas, like inland California, where homebuyers borrowed most excessively—will make it impossible for them to afford even the most creatively modified mortgage.

Obama’s bailout team appears very aware of loan mods’ limitations. It has been laying the political groundwork to empower bankruptcy judges to order “cramdowns” of unpaid mortgage debts—forcing investors to accept those elusive but all-important reductions of principal owed. Its proposal faces serious opposition from the securities and banking industries, even as discussions continue about ways to mitigate investors’ pain (for example, by giving them ways to take gains when a home gets resold in the future).

With the fate of cramdowns uncertain, borrowers are continuing to shoulder the high price of restructuring troubled home loans—and now taxpayers will be taking on a share of the tab. (Mortgage securities investors will contribute, too—in order to qualify for the aid, lenders must match the amount of the government support.) We should be mindful of what we’re buying. In real estate markets where prices are in free fall—Phoenix is among the worst—loan modifications compel homeowners to pay even more than they originally did for increasingly worthless real estate. Instead of liberating borrowers from the burdens of the real estate bubble, most loan mods assure them a future indentured to lenders.

And maybe that’s the homeowner bailout’s saving grace. Only those owners most fiercely attached to their real estate—those who are trying to hold onto a beloved house that’s been in the family for generations, or who are doubling down on their bets for future price appreciation, or who spent all their home equity on a home theater room and want to live in it forever—ought to find a loan modification attractive. Homeowners will still have the final say. No one can stop them from packing up and walking away.

Alyssa Katz is a member of the New York Daily News editorial board.