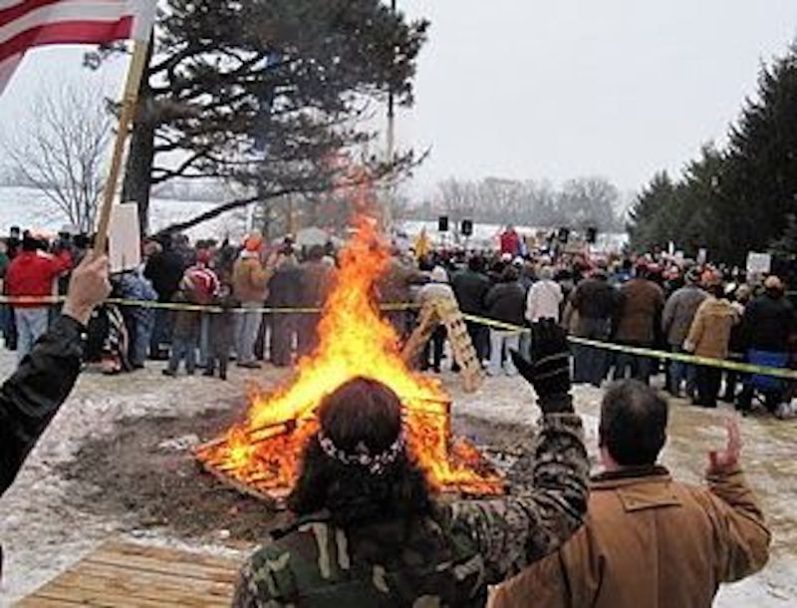 From familiar stories about “illegal” electioneering by ACORN and the Black Panthers to Sharron Angle’s recent claim that Harry Reid is trying to steal the election by offering prospective voters free food — the myth of widespread voter fraud is now commonplace among Republicans. In just one example, an unconfirmed assertion that Nevada voting machines already had Reid’s name checked off became a national story, with Rush Limbaugh claiming that the “New Black Panther Party,” with the “imprimatur of the Justice Department,” was “running fraudulent elections” across the country.

In this swirling storm of misinformation and propaganda, a half-dozen Republican activists met in the community room of the Tri City National Bank in Sturtevant, Wisconsin on October 27, to receive training on how to be an election observer. Lou D’Abbraccio, an official with the Racine County Republican Party, laid out a parade of voter fraud horribles to the assembled men, from fraudulent voter registrations to vans organized by “leftists” ferrying people “incentivized” with money or coupons to cast multiple votes at different polling locations.

“There are polling locations where the election workers are largely Republican, and we have less concern,” said D’Abbraccio, a member of the Racine Tea Party, the local chapter of Koch brothers-funded Americans for Prosperity. “Then there are polling places where, not so much. Historically we have observed things there that are issues.”

This year, the Wisconsin GOP, Americans for Prosperity and Wisconsin tea party groups are working together, through the GOP and the tea party-affiliated website We’re Watching Wisconsin Elections, to combat this alleged scourge on the democratic process.

D’Abbraccio went on to recount “war stories” from previous elections, particularly 2004, which he claimed was “the worst election I’ve experienced in Racine.”

Even though Wisconsin law prohibits photography by anyone but news media inside a polling place, D’Abbraccio counseled his trainees to bring their cell phone cameras just in case. “Theoretically you’re not supposed to take pictures,” he said, but told the group to do it “surreptitiously” if they needed to document anything — and to “be careful.”

The progressive group One Wisconsin Now has asked the US Attorney, the State Attorney General and the state Government Accountability Board to investigate a joint plan by the state Republican Party, Americans for Prosperity and local tea party groups “to engage in voter suppression” during the election, in violation of the Constitution and federal law. In particular, based on documents made available on the We’re Watching Wisconsin Elections and other tea party sites, as well as a recording obtained by One Wisconsin Now at a June meeting at which the coordination was discussed, AFP would pay for mailings to voters so that a list of supposedly ineligible voters could be used by tea party activists to challenge voters at the polls.

The GOP and tea party groups have denied the existence of any plan, in spite of the public documents outlining it. Tim Dake, one of the speakers on the tape One Wisconsin Now obtained and a leading state tea party figure associated with the Wisconsin Grandsons of Liberty, called the charges “ridiculous, reprehensible and could be construed as libel.” But the We’re Watching Wisconsin Elections site continues to publicize meetings organized by the Wisconsin Republican Party to train election observers and to make the training materials available on their site.

At the Racine County training, there was no discussion of using any lists to challenge the eligibility of voters. While D’Abbraccio urged his trainees to be polite, he nonetheless continually elaborated on and reinforced the impression that rampant fraud by “leftist” groups threatened the integrity of the election and that election observers were necessary to report such fraud to party officials and to challenge the eligibility of voters they suspected of fraud.

Even with appropriate training, said Wendy Weiser, deputy director of the Democracy Program at the Brennan Center for Justice at New York University School of Law, “that doesn’t diminish our concern about what might happen on Election Day” with election observers. The proliferation of unsubstantiated claims of widespread voter fraud, she said, “cements distrust and hostility and lack of confidence and anger, and it’s inaccurate. There’s no basis for this, and stoking anger and mistrust around election time is not a good thing.”

The unsubstantiated claim that ACORN had engaged in widespread fraud in the 2008 election is a well-worn trope in conservative media, along with the implication, and sometimes explicit claim, that the election of Barack Obama was illegitimate. After the conservative-instigated witch hunt led to ACORN closing its doors, additional bogeymen have been added to the mix.

As D’Abbraccio put it, “An organization running around comprised of all the alphabet soup of evil: AFSCME, SEIU, ACLU — every leftist group you can imagine put together some umbrella group called Election Protection. In the city of Racine, it actually took over polling locations [in 2004].” That year, Racine County was a hotbed of charges of voter fraud by conservatives, but an analysis by the Brennan Center found just seven instances of ineligible voters knowingly casting ballots that were counted — just 0.0002 percent of the total votes cast statewide.

In spite of this lack of evidence, D’Abbraccio claimed to be “concerned with wholesale fraud.” He painted a foreboding picture of “knocks and drags,” which he described as vans trolling the streets for random people to pick up. He claimed that “leftist” groups give people campaign literature that was really a “coupon” to redeem at a local establishment. He said these vans “drag people from polling place to polling place and have them vote multiple times.”

“That is a complete fantasy and fiction,” said Scot Ross, executive director of One Wisconsin Now. “There is nothing like that that happened.”

Reid Magney, a spokesman for the state Government Accountability Board, which oversees elections, said that there are “fairly rare instances” of people double-voting, citing one case last year in which a couple was convicted of voting in the polling places of both their primary residence and their vacation home. This was detected not due to a citizen complaint, he said, but because the “we [the GAB] proactively run checks after every election to make sure there is no double voting.”

As far as other types of double-voting or ballot-stuffing, Magney said, “we haven’t seen any kind of evidence of any widespread problem of that.”

Ross added that the groups concerned about voter fraud have a “complete and total delusion that minorities are voting more than once. There’s absolutely not one shred of evidence, no conviction, no charges, no nothing of that nature in the state of Wisconsin. I am aware of absolutely no activity like that.”

He speculated — without any basis — that Advancing Wisconsin, a group formed in 2008, may be the culprit this year. “We suspect that if it happens this time,” said D’Abbraccio, “it’s going to be through a group called Advancing Wisconsin, which was funded by George Soros [as] this kind of umbrella group that’s intended to create a permanent election infrastructure for all these groups so they’ve got the know-how and resources on election day, and some of that know-how is how to cheat.”

Meagan Mahaffey, Advancing Wisconsin’s executive director, said her group did no voter registration drives in 2010. Of D’Abbraccio’s statement, Mahaffey said, “I’m pretty shocked by it. It’s a pretty serious allegation he’s making. Nothing to back it up and nothing to show we are doing this. It’s not true, not rooted in anything. Just a guy in a meeting saying whatever he wants to say.”

D’Abbraccio also claimed that there is abuse of the corroboration process for voters who register on election day. Under Wisconsin law, if someone seeking to register on election day lacks the proper verification of their address — either their drivers’ license number, the last four digits of their Social Security number or other acceptable proof for establishing residence, such as a lease or utility bill, they can have someone “corroborate” their residency. Referring to the process as “vouching,” D’Abbraccio maintained that people are grabbed as they finish voting and asked to “vouch” for a stranger, producing an “endless loop” of people vouching for each other.

Magney, the GAB spokesperson, said that he was not aware of phony corroborations. “I’m not aware of us prosecuting” anyone for that, he said, adding, “I don’t think that that’s an issue.”

“I have never heard such an allegation,” said the Brennan Center’s Weiser. “That is something that is certainly easily observable and easy to get caught” because “it is so elaborate and visible.”

D’Abbraccio also accused the GAB of being derelict in its responsibility to purge 18,000 “invalid” registrations from the voter rolls, based on mail returned as undeliverable to the GAB.

But the reality is quite different. Magney said that as part of a routine check under the Help America Vote Act, the Board sent letters to voters whose details on their voter registrations didn’t match other government records, such as the Department of Motor Vehicles database. Frequently, he said, such lack of a match is caused, for example, by one record bearing the person’s middle initial only, while the other bears the person’s full middle name. What’s more, he said, the lack of a match doesn’t render the person ineligible to vote; the purpose of the database match, he said, is only “to improve data quality.” (The Republican State Attorney General J.B. Van Hollen sued the board in 2008 in an attempt to force it to require a match for a voter to be eligible to vote; the case was dismissed.)

About the 18,000 voters whose letters were returned as undeliverable, and who conservatives are charging should be removed from voter rolls, Magney said, “we didn’t feel comfortable removing [from the voter rolls] them based on one letter coming back, especially because there is no requirement in the law that your information has to match in the first place.” He said the GAB sent a second letter, and 12,431 have come back as undeliverable a second time, in most cases probably because the voter had moved. “Those are the people who we have marked as inactive. If they show up to vote, their names won’t be on the list at their polling place,” although they could do a same-day registration as allowed by Wisconsin law.

Election observers can be perfectly innocuous, but the climate of “misinformation or fear, stoking fear of voter fraud” creates risks, said Weiser. While that has been has been occurring for several election cycles, she said, “what’s different in this cycle is more mobilization of citizens, party activists and political operatives to police the polling places and to take matters in their own hands… if people are overly outraged so they are more likely to cross lines, and that’s a problem.”

The Investigative Fund at The Nation Institute provided support for this article.