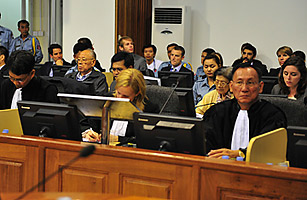 Former Khmer Rouge leaders on trial at the Extraordinary Chambers in the Courts of Cambodia on the outskirts of Phnom Penh June 27, 2011. | Credit: MARK PETERS / ECCC / REUTERS

Stooped from old age and disease, the four surviving leaders of Pol Pot's communist revolution of 1975, which left perhaps 2 million people dead, at last entered the dock to stand trial at a special tribunal here on Monday. Facing charges of crimes against humanity, war crimes and genocide, they are accused of leaving this tiny nation in ruins after nearly four years of mass murder and enslavement with the greatest number of victims in any trial since the Third Reich.

But the court, created by the United Nations and Cambodian government in 2003, is marking what should be its greatest success amid the standing accusation that, as it brings some Khmer Rouge leaders to justice, it is also whitewashing other related investigations with little to no objection from the international community. The Open Society Justice Initiative, an organization monitoring the court has called for an investigation of judicial misconduct, saying judges have deliberately failed to investigate prosecutors' allegations in other Khmer Rouge cases. UN officials continue to walk off the job in frustration, citing what one consultant called a “toxic atmosphere of mutual mistrust.”

Describing the current trial as among the most complex ever prosecuted, court officials had long expected the proceedings to be a challenging enterprise, not least because it will include four different defense teams and uncooperative suspects pursuing divergent arguments. As trial began Monday, Nuon Chea, 84, perhaps the most important criminal defendant anywhere in the world today, told judges he found the proceedings to be unfair and would return to his cell. “I am not happy with this hearing and I would like to allow my co-counsels to explain the reasons behind this,” he said, after instructing his lawyers to seek judges' permission to wear a knit ski cap, to protect him from the courtroom's air conditioning, along with his trademark black sunglasses, to shield him from the lighting.

His departure drew angry reactions from audience members. “It is just an excuse,” said Chum Mey, 80, who survived torture and internment by the secret police, which was briefly controlled by Nuon Chea. “Of course he was quite rude.” Other defendants soon left the courtroom as well: former Foreign Minister Ieng Sary, 85, complained of discomfort and watched via video linkup in a special ground-floor room. His wife, Social Action Minister Ieng Thirith, 79, also claimed to be unwell and returned to her cell. Only the former head of state, Khieu Samphan, 79, remained throughout the day.

After seizing Phnom Penh to end a civil war in 1975, Khmer Rouge forces emptied Cambodia's towns and cities at gunpoint, forcing millions of people into the countryside, instantly creating a class of slaves who were the most prone to execution, overwork, mistreatment and sickness. The new government banned private property, decreed that Cambodians comprised only a class of workers and peasants and that opposing the state was punishable by death. In a relentless search for supposed internal enemies accused of “boring from within,” the new government executed up to a million people, or one in eight Cambodians, at 200 prisons, torture houses and an unknown number of other execution sites across the country.

Nuon Chea, who told investigators his birth name was Lao Kim Lorn, was elected deputy chairman of the communist party in 1960 and has been known since the regime as Brother Number Two, second in authority only to Pol Pot. Judicial investigators say he played a central role in the formation of virtually all government policy, including the disastrous forced movements of millions of people around the country; the search for, torture and execution of the regime's “enemies;” the genocide of people of Vietnamese origin and of the predominantly Muslim Cham ethnic minority; and the government's deadly campaign of forced labor as well as a policy of forced marriage that prosecutors equate with rape. As part of an alleged common criminal plan, Ieng Sary, Ieng Thirith, and Khieu Samphan, 79, are likewise accused with Nuon Chea of contributing to these policies and making themselves jointly responsible for the resulting crimes.

But UN prosecutors say another five suspects, who currently roam freely around the country, are responsible for a separate wave of criminality that left hundreds of thousands of people dead and will not be addressed by the current trial. However the court has allowed these cases to lie fallow — concluding one case after questioning neither suspect — drawing accusations political interference. Hun Sen, Cambodia's strongman prime minister, has publicly dictated which suspects the court may pursue and which witnesses it may summon — and said that the trial which began here on Monday will be the court's last. UN Secretary-General Ban Ki-moon this month forcefully denied that the world body had told a German judge to cooperate with Hun Sen's demands.

Since the start of negotiations in 1999, Cambodian authorities have always maintained that the court should try as few people as possible, with Hun Sen reassuring former Khmer Rouge combatants and officials, of which he himself is one, that only “four or five” would be prosecuted. While agreeing that the number of prosecutions would likely be small, UN officials insisted that the court's prosecutors be free to choose whom to pursue. In a 1999 memo to UN headquarters, Ralph Zacklin, who was then UN assistant secretary-general for legal affairs and a negotiator in establishing the court, said a “trial of selected Khmer Rouge leaders, which would shield other leaders presently situated in Cambodian territory from legal process, would be an unacceptable form of selective justice.”

Twelve years later, both the United Nations and donor countries appear to have taken the diametrically opposite view. In an interview, a diplomat representing one of the court's financial backers said that if some of the court's work proved to be less than perfect, this would not detract from its other valuable achievements. “It's a package deal. We look at the court as an institution. At the end of the day, there will be things it did right,” said the diplomat, who spoke on condition of anonymity. Anne Heindel, a legal advisor to the Documentation Center of Cambodia and an expert in international humanitarian law, said the handling of one of the court's cases was already cause for concern. “If it's a blatant sham, if it's clear that there was no investigation, then that's going to harm the legitimacy of the whole court,” she said.

— With reporting from Kuch Naren

Douglas Gillison has covered the Khmer Rouge trials since 2006. Research support for his reporting was provided by The Investigative Fund at The Nation Institute, now known as Type Investigations.