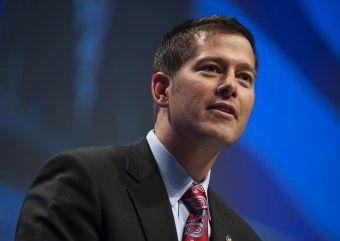 Freshman GOP Rep. Sean Duffy, a member of the House Financial Services Committee, raised more than $200,000 in his first three months in office. Duffy said then he was still “getting up to speed" on issues lik...

There are the bills a president signs sitting in the Oval Office and the bills that merit a Rose Garden ceremony. And then there are bills so momentous—or at least so critical to a president’s reelection prospects—that those around the commander in chief orchestrate a more elaborate ceremony. Such was the case with Dodd-Frank, the financial-reform package that President Obama signed into law last July against a backdrop of velvet curtains in a resplendent venue a few blocks from the White House.

“Passing this bill was no easy task,” Obama told the 400 dignitaries who witnessed the most ambitious overhaul of the financial system since the Great Depression. “We had to overcome the furious lobbying of an array of powerful interest groups and a partisan minority determined to block change.”

The pomp and ceremony may have been premature. Ever since the law’s passage, those same “powerful interest groups” who opposed Dodd-Frank have been trying to prevent it from taking effect. As written, the law delayed implementation of most of its new rules for at least 12 months so regulators would have time to hammer out the finer points of the 2,319-page bill. But that delay has also provided an opening to banks and other financial institutions seeking to defang the law. “Just because we lost that round,” says Cam Fine, president of the Independent Community Bankers of America, which spent $1 million in the first three months of this year to lobby against implementation, “doesn’t mean we just give up. Congress changes its mind all the time.”

Take what’s been happening with the Consumer Financial Protection Bureau, which is the law’s most significant and controversial provision. The agency is set to go live next week, except that Republicans in the Senate have made it clear they won’t confirm anyone to serve as its head unless the agency is radically scaled back. All told, Dodd-Frank has some 300 provisions, and the bulk of them are under attack by a number of foes, from bankers to check-cashing companies to free-market Republicans.

And so it is, says a discouraged Rep. Barney Frank, that his eponymous bill is “facing a death through a thousand cuts.”

The story of this evisceration is largely one of money—the tens of billions of dollars in profits that banks and other financial institutions stand to lose if Dodd-Frank is implemented, and the astonishing sums they’re spending to squash it. The industry paid lobbyists $1.3 billion in 2009 and through the first three months of 2010, according to the Center for Public Integrity, which added up the spending by the 850 businesses and trade groups fighting financial reform. Many of these same businesses are now spending as much money, if not more, to lobby for curbs on the new law.

The Financial Services Roundtable, for instance, is on pace to spend $10 million on lobbying in 2011, based on its spending the first few months of this year. That’s well above the $7.5 million that the trade association, which represents most of the country’s largest financial firms, spent in 2010. The American Bankers Association is expected to beat its $7.5 million spent last year, based on first-quarter-2011 numbers. JPMorgan Chase and Citigroup are on track to match last year’s lobbying spending: $7 million and $5 million, respectively. Wells Fargo, which spent $5 million last year, spent $1.9 million in just the first quarter of this year.

None of that includes the millions in campaign contributions the banks and trade associations are pouring into the coffers of those members of Congress who sit on the relevant committees responsible for financial reform — especially those willing to take on Dodd-Frank.

It’s simple to see why banks oppose Dodd-Frank. A new consumer-protection agency means another regulator poking into their business, telling them how they can market a mortgage or credit card. Under the new law, for example, lenders and investors can’t just package mortgages and sell them to clients, as they did in the years leading up to the financial meltdown; they would need to hold on to at least a 5 percent share of most mortgage-backed securities. The final bill also caps the fee a financial institution can charge retailers on debit-card transactions, eating into a huge profit center for the banks. And the law limits the portion of their holdings big banks can wager on riskier ventures such as derivatives and commodities futures. In recent years, such bets have been a windfall for banks.

Yet among a majority of Americans the law is exceedingly popular: according to a Gallup poll last fall, 61 percent of respondents said the bill’s passage was a good thing, and 42 percent of those identifying themselves as Republican felt the same. This support complicates the task facing the banks and their allies in Congress. Presidential hopeful Michele Bachmann introduced legislation earlier this year that would rescind Dodd-Frank, but the Republican leadership in the House hasn’t granted her bill so much as a hearing.

Instead, Republicans have gotten behind a series of measures that wouldn’t repeal Dodd-Frank as much as whittle it down to the point of ineffectiveness. “They are trying to undo the bill, but in ways that are more subtle than what Ms. Bachmann has in mind,” says Frank (who adds of his ideological adversary, “Of the 240 Republican members of the House, I don’t think she ranks among the top 230 most respected”). Rather than follow Bachmann’s lead, Frank says, the Republicans have “decided to cripple the bill in disguise.”

One example: Dodd-Frank calls for a sweeping overhaul of the $600 trillion derivatives market—a culprit in the economic meltdown. After the Republicans took the majority in the House, they tried slashing the funding of the agencies charged under the bill with derivatives oversight. When that didn’t work, the focus shifted to delaying the implementation of derivative-related reforms for as long as possible—until at least October 2012. Put off implementation a little longer, and there’s a chance the new Congress, or a new administration, might be less inclined to rein in the financial sector.

Or consider the assault on Elizabeth Warren. The Harvard Law School professor first proposed the idea of a consumer-protection agency in 2007 and has since become a lightning rod for conservative anger over financial reform. On Meet the Press, Mitch McConnell, the Senate minority leader, cast Warren as an ideologue hellbent on creating an agency that “could be a serious threat to our financial system.”

“Why would anyone want to gut the consumer agency before it has had a chance to help a single family?” Warren asked in an email exchange with NEWSWEEK. Warren, of course, knows that the answer to that question lies not just with the big banks that don’t see anything in it for them, but also with the fringe lenders who stand to lose the most in the face of a strong consumer-protection agency. These include check cashers, pawnbrokers, and payday lenders (who make high-interest loans against a person’s next paycheck).

Warren knows, too, that she has become a piñata in the political arena precisely because the consumer bureau she dreamed up is so popular. If the Republicans can dirty Warren and cast doubts on her creation—and, by proxy, the rest of financial reform—they can potentially strike an even bigger victory: undermining one of the sturdiest planks in the president’s reelection platform.

Maybe the miracle is that Dodd-Frank passed in the first place. The financial-services sector was hit hard by the economic meltdown, so banks spent less on lobbyists and in campaign contributions, according to the watchdog organizations that monitor outside spending on politics. But by all accounts that slowdown was brief. As soon as reform became a threat in 2009, banks ratcheted up spending again. Luckily, they had plenty of cash on hand—courtesy of the federal bailout.

JPMorgan Chase, for instance, which received $25 million in TARP money, spent $14 million on lobbying during the 2009–10 election cycle, according to OpenSecrets.org. Goldman Sachs, which received a $10 billion bailout, spent $7 million.

Roughly 3,000 lobbyists were engaged in the fight over Dodd-Frank, according to the Center for Public Integrity—more than five lobbyists for every member of Congress. But as popular anger at the banks raged, Dodd-Frank only grew stronger. The consumer-protection agency, for instance, was initially conceived as a five-person commission with limited rule-making authority. In the end, Congress created a strong, independent agency to be run by a director with broad powers.

Today, demand for lobbying firepower continues to grow, making Washington’s so-called Gucci Gulch one of the country’s few high-job-growth areas. Scott Talbott, the head of government affairs at the Financial Services Roundtable, says the reason is simple: the signing of Dodd-Frank last July represented “halftime” in the debate. Now opponents must fight a two-front war that has them trying to persuade elected officials to rethink decisions while influencing the regulators whose job it is to implement Dodd-Frank.

“Everyone is hiring,” says Talbott. One such firm is Clark Lytle & Geduldig, whose client list has included Talbott’s group and also Goldman Sachs, MasterCard, and the American Banking Association. Clark Lytle is relatively Lilliputian, but it brought in $1.9 million in lobbying fees last year. This year it’s set to book more than $3.3 million.

Not every lobbyist engaged in the fight over Dodd-Frank represents the business side of things, of course. There’s Travis Plunkett, the sole registered lobbyist for the Consumer Federation of America. There’s Ed Mierzwinski, a lobbyist for the U.S. Public Interest Research Group, a left-leaning organization fighting to protect Dodd-Frank. “I’d say the other side outspent us at least 100 to 1” in 2010, says Mierzwinski. A coalition of groups, including U.S. PIRG, spent about $2 million during the debate over Dodd-Frank, but it’s not likely it can continue spending that kind of money. “Arguably, we’re now getting outspent by closer to 200 to 1,” says Mierzwinski.

One day, Dodd-Frank may prove good for consumers. But so far it has been a boon mostly for D.C.’s lobbyists and the campaign coffers of many Republicans—especially those on the House Financial Services Committee.

Banks and other financial institutions have always given to lawmakers who oversee their industry. But at a time when banks are spending big to fight Dodd-Frank, a seat on the Financial Services Committee can be downright lucrative. A series of studies by the Sunlight Foundation, a nonprofit research group, found that about 70 percent of the campaign contributions to Spencer Bachus, the Alabama Republican who recently took over as chairman, came from financial services in the first quarter of 2011. Barney Frank, the previous chairman, raised less than a third of his money from that sector.

Freshmen are also benefiting. Through the first three months of the year, seven of the 10 Republican freshmen on the committee had received at least 40 percent of their PAC campaign contributions from financial services, according to the Sunlight Foundation.

One of these is Sean Duffy of Wisconsin, who raised more than $200,000 in his first three months in office. Duffy knew little about finance when he arrived in Washington. The hardest part, he told the Wausau Daily Herald in April, was “getting up to speed on some issues I wasn’t very familiar with—banking issues, housing issues, insurance issues … issues that I didn’t deal with in my entire life.” That month, Duffy sponsored one of a series of bills to water down or delay Dodd-Frank. The former prosecutor, who was once a cast member on MTV’s The Real World-Boston, has described the consumer bureau as a “rogue agency” with an “authoritarian structure.” A Duffy spokesman says the congressman’s concern in sponsoring the bill is the “burdensome regulations” hindering community banks and credit unions in his district.

“It’s done,” the president proclaimed after signing Dodd-Frank last year. But the battle was just beginning.