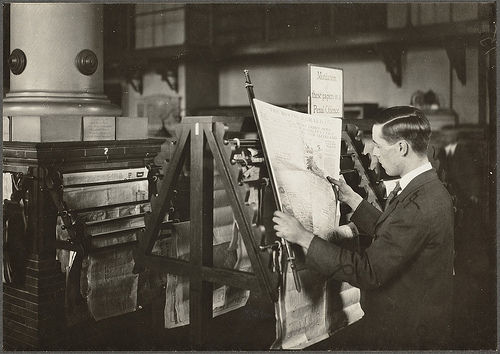 In the world of American journalism, doom and gloom are the visitors who have overstayed their welcome so long they look like they’re here to stay. In the past week, PBS eliminated 21 staff positions, the San Diego Union Tribune is considering going on the block, and just today the Chicago Tribune announced it will begin printing the Chicago Sun-Times, a move that will shed 400 jobs.

But a recently released “data visualization” from the Bill Lane Center for the American West at Stanford University, a representation of the growth and decline of 140,000 newspapers from the first U.S. newspaper, Boston’s Publick Occurrences in 1690, all the way to 2010, shows that community newspapers are surprisingly healthy, with local weeklies at last count numbering more than 7,500. Community papers are defined as those with less than 30,000 in circulation, and community and rural newspapers are used interchangeably in this study.

The interactive map shows the geographic spread of printing presses westward over the centuries; it’s accompanied by short summaries of each significant new phase in the newspaper industry and is peppered with fun facts. For instance:

The story of the spread of rural papers is also a story of the frontier, a boundary that shifted ever westward as new towns were built. Printers rushed to establish papers in these young towns, as was the case, the authors write, “in the sleepy town of Denver, Colorado — then called Cherry Creek — where not one but two printers raced to publish the pioneering paper. Accounts of the [1859] ‘Battle of the Newspapers’ have it that William N. Byers’ Rocky Mountain News beat out the journeyman printer Jack Merrick’s Cherry Creek Pioneer by a mere 20 minutes.” (The Rocky Mountain News sadly closed its doors in 2009, marking the end of Colorado’s oldest business.)

As the 1950s approached, growing suburbanization meant that as small-town weeklies closed, they were replaced by suburban papers like Long Island Newsday, founded in 1949. By 1960, there were more than 2,000 such papers across the country. According to the Stanford report on the health on rural papers, quoting a 2010 survey conducted by the University of Missouri for the National Newspaper Association, more than three-quarters of respondents said they read most or all of a local newspaper every week. A full 94 percent said that they paid for their papers.

There’s no question that the hyper-local news found in a community paper, which publishes accounts from the police blotter and the valedictorian speech made by a neighbor’s daughter, cannot be replaced by the large national or regional papers. As the authors write:

“The community newspaper business is healthier than metro newspapers, because it hasn’t been invaded by Internet competition,” says Al Cross, director of the Institute for Rural Journalism and Community Issues at the University of Kentucky. “Craigslist doesn’t serve these kinds of communities. They have no effective competition for local news. Rural papers own the franchise locally of the most credible information.”

The importance of the community of a local paper is something that John Wylie, publisher of the Oologah, Oklahoma Lake Leader argued for in a 2007 speech to a rural journalism conference:

“To our readers, we are not the newspaper, we are their newspaper. Down the block at Rogers Mini Stop, we sell more than a hundred papers every week. If our press run is late we get frantic calls from the Rogers family. They have a store full of irate customers who want their papers now…. We all know the traditional reasons — the little stories that never would be considered ‘news’ anyplace else. Our readers really care about those things.”

While the rural newspaper is facing some challenges of its own — a rapidly aging readership, the possible loss of long-time subsidies from the U.S. Postal Service, and the decline of local advertising — the current state of rural journalism is better than might be expected. And big-time journalism organizations are taking note. Just look at the prizes won in the past year by rural reporters: a Pulitzer for Public Service in 2010 to Daniel Gilbert of the Bristol Herald Courier for his reporting on the mismanagement of natural-gas royalties in Southwest Virginia (he donated his winnings to the Institute for Rural Journalism and Community Issues); a Gerald Loeb Award for distinguished financial journalism in 2011 to Chris Serres and Glenn Howatt’s series in the Minneapolis Star-Tribune, “Hounded — Debtors and the New Breed of Collectors;” a Tom and Pat Gish Award for courage in rural journalism in 2010 to Samantha Swindler and Adam Sulfridge for their series investigating a local corrupt sheriff for their Corbin, Kentucky daily, the Times-Tribune, which led to the official’s indictment on 21 counts of abuse of public trust and evidence tampering; and more.

The Institute for Rural Journalism and Community Issues, founded in 2001, is there to help rural reporters, aiding them in defining the public agenda for their communities and grasping the local impact of larger national issues. In its 2010 Rural Report, its director, Al Cross, wrote: “Perhaps ironically, the financial squeeze on metropolitan newspapers and other changes in the news media have made all the more important the Institute’s vision of helping rural America through journalism, because most major papers and broadcast outlets have abandoned coverage of rural areas. That has left a vacuum that rural news media must fill, covering issues and setting the public agenda in their communities.” Rural reporters rely on the professional development, research reports and guidance offered by organizations such as the IRJCI, and programs like the new training fellowship announced last September by Investigative Reporters and Editors for rural journalists to attend IRE’s computer-assisted boot training camps.

In her new book, Emus Loose in Egnar: Big Stories from Small Towns, Judy Muller explores community papers across the United States and writes about the close bond between the newspaper and the community it covers, a relationship that most big metro papers have lost. As the Stanford study notes:

She describes the elation in the depressed Skagit Valley town of Concrete, Washington, when a young outsider came to revive their newspaper, the Herald. “People were — I’m not kidding — crying and hugging him,’ says Muller, “and the paper’s not all that good, frankly, but what it represents to those folks who are so isolated up in that canyon is really powerful.”

In a post for Nieman Reports, published by Harvard University’s Nieman Foundation for Journalism, Swindler discussed the dangers and rewards of working for a small-town paper. She and her co-author even bought guns for their own protection during their investigation of the corrupt local sheriff. But his arrest vindicated their stories. “There is a great need for good investigative journalism in rural America,” she wrote. “Young reporters tend to think they need a byline from The New York Times to make a difference in the world. If they really want to have an impact, get a job with a community paper, and start asking the tough questions that no one ever asked before.”