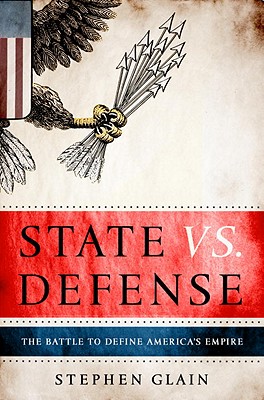 State vs Defense by Stephen Glain

A masterful account of how sixty years of American militarism created the Cold War, fanned decades of unnecessary conflict, helped to fuel Islamist terror, and threatens to bankrupt the country.

For most of the twentieth century, the sword has led before the olive branch in American foreign policy. In eye-opening fashion, State vs. Defense: The Battle to Define America’s Empireshows how America truly operates as a superpower and explores the constant tension between the diplomats at State and the warriors at Defense.

State vs. Defense characterizes all the great figures who crafted American foreign policy, from George Marshall to Robert McNamara to Henry Kissinger to Don Rumsfeld with this underlying theme: America has become increasingly imperial and militaristic.

Take, for example, the Pentagon, which as of 2010, acknowledged the concentration of 190,000 troops and 115,000 civilian employees inside 909 military facilities in 46 countries and territories. The price of America’s military-base network overseas, along with the expense of its national security state at home, is enormous. The bill comes in at well over $1 trillion. That is equal to nearly 8 percent of GDP and more than 20 percent of the federal budget. (By comparison, China, Russia, Cuba, Iran, and North Korea, the five countries Pentagon planners routinely trot out as conventional threats to the national well-being, have a cumulative security budget of just over $200 billion.) Quietly, gradually — and inevitably, given the weight of its colossal budget and imperial writ — the Pentagon has all but eclipsed the State Department at the center of US foreign policy.

In the tradition of classics such as The Wise Men, The Best and the Brightest, and Legacy of Ashes, State vs. Defense explores how and why American leaders succumbed to the sirens of militarism, how the republic has been lost to an empire, and how “the military-industrial complex” that Eisenhower so famously forewarned has set us on a stark path of financial peril.

Reporting for this book was supported in part by The Investigative Fund.

Stephen Glain is a Paris-based journalist.